The Peoples’ Democratic Party (HDP) and the Kurdish Policy Research Center (KPRC) have organised the 3rd International Kurdish Conference to be held on April 29 at The National Press Club in Washington D.C.

The Peoples’ Democratic Party (HDP) in Turkey and the Kurdish Policy Research Center (KPRC) have organised the 3rd International Kurdish Conference to be held on April 29 at The National Press Club in Washington D.C. The HDP and KPRC are jointly organizing this year’s conference, the theme of which is: Co-Existence Through Democratic Autonomy and Self-Governance: The Kurdish Case.

In a statement on tomorrow’s event, HDP and KPRC stated that; “Upheavals in the Middle East have shaped a new geopolitical landscape, while strengthening old alliances and forging new ones. The region has seen the formation of a Turko-Arab Sunni axis, which is challenging the axis composed of Shi’a Iran and its proxies. Examining the conflict and tensions between these two axes is central to understanding the dynamics that have led to the atrocities committed by the Islamic State (IS), a terrorist organization supported financially and militarily by regional players such as Turkey, Saudi Arabia and Qatar.”

HDP co-leader Selahattin Dermitas to be keynote speaker in Washington

HDP and KPRC pointed out that the regional crisis drags on into its sixth year with no sign of a peaceful political solution as the fight against IS continues, adding; ” On the contrary, despair is on the rise and the war has caused one of the worst humanitarian crises in recent memory.”

Describing the Kurds as the only regional players who have shown a willingness and ability to fight IS and its allies, HDP and KPRC stressed that the Kurds have not only been able to prevent territorial expansion, but also have been able to push IS back from territory it controlled. The statement continued; “This is all despite the lack of regional support for the Kurds and the direct effort to undermine their victories against IS. Kurdish victories against IS have culminated in the newly established Kurdish Federal Region of Syria, a.k.a. Rojava, now a safe haven and potential model of democratic autonomy and self-governance.”

The participants of the conference will offer their perspectives on the developing situation in the Middle East in light of the Kurds’ rise in political and military significance. The politicians, academics, and policymakers presenting will also engage in discussions about the political implications of the increasing importance of the Kurds for the future of the Middle East and international politics and the prospect of crucial partnerships between the Kurds and the U.S. to bring stability, peace, and democracy to the Middle East.

The event that is aimed at offering an understanding and appreciation of the crucial role the Kurds have played in the regional fight against IS. The event program is as follows:

Opening Remarks by Deniz Ekici, Executive Director, Kurdish Policy Research Center (KPRC):. ‘The Crucial Role of Kurds in the Fight against ISIS in Iraq and Syria’ — 9:30am –  10:45am

Speakers:
David L. Phillips, Director of the Program on Peace-Building and Rights at Columbia University’s Institute for the Study of Human Rights in New York
Khalaf Salih Faris Ali, Representative of Shingal Assembly

An HDP delegation headed by Co-President Selahattin Demirtaş has left for the United States for a series of meetings with senior officials.

HDP’s Foreign Affairs Representative and Deputy Co-President Hişyar Özsoy and Assembly Group Deputy Chairperson Pervin Buldan accompanied Demirtaş, who will be meeting with senior U.S. officials and participating in an annual conference organized by the HDP office in Washington.

The HDP delegation led by Demirtaş will be welcomed by senior officials and meet with Obama’s European director Charles Kupchan, Assistant Mark Shapiro and Ambassador Kristie Kenney. The delegation will return to Turkey on Monday, May 2. 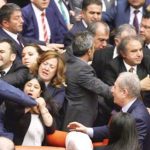