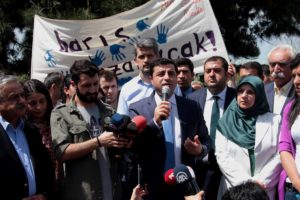 HDP Co-President Selahattin Demirtaş visited the vigil for imprisoned academics at Bakırköy Women’s Closed Prison. He explained that four academicians were in jail for demanding peace. People who should be receiving peace prizes are in prison in Turkey whereas people such as government officials who should be in jail are free.

Demirtaş noted that freedom of speech and the press were requirements for all other freedoms and the AKP government was attacking these two freedoms because it is afraid that its crimes, such as supporting ISIS and massacring civilians in North Kurdistan [eastern Turkey], will be fully exposed.

The HDP Co-President stated that the other three parties in parliament only unite when it comes to anti-Kurdish positions, such as lifting the immunity of HDP parliamentarians. He criticized President Erdoğan’s provocative statements targeting academics, students, journalists and other groups and described Erdoğan’s silence on exposed rapists an attempt to protect and even rewards rapists for his political aims.

Demirtaş said that the AKP has transformed into a perverted cult as its members fail to make public criticisms of rapists in education institutions and were trying to hide their crimes by blaming everything on the HDP. Erdoğan has hundreds of paid-journalists, said Demirtaş while criticizing the double standard of mainstream media when it comes to commenting on the government.

The HDP co-president stated that Erdoğan was scared of calls for peace and said that the AKP is  happier as more blood spills and citizens die. He explained that the reason Erdoğan has been pushing so hard for a presidential system is because he is aware that the AKP’s crimes against humanity are exposed and its time in government has come to an end.

Demirtaş criticized the on-going military operations in North Kurdistan, and said that the AKP government has been bombarding mosques and murdering civilians.

Lastly, Demirtaş said that government officials were lying to the public about the on-going operations. He criticized Erdoğan’s praise for death and martyrdom and called upon Turkish society to raise its voice for peace and to end the ongoing war. 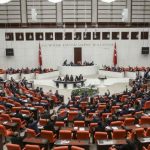