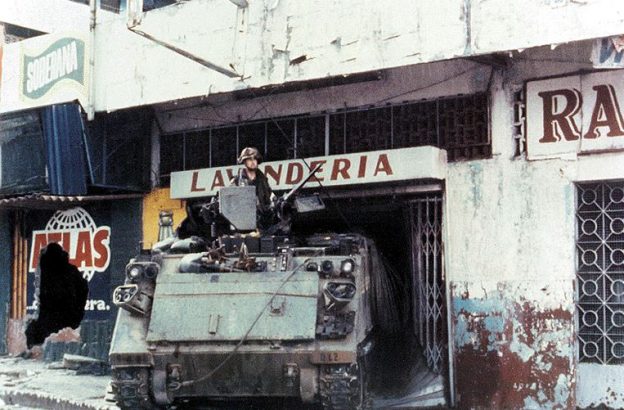 Apparently the best way to fix an economic downturn is by replacing it with a full-blown humanitarian catastrophe.

There’s no doubt about it: Venezuela’s economy is a disaster zone, and there’s no easy solution. The Maduro administration’s efforts so far have been a mixed bag, focusing on avoiding default at all costs, while trying to beef up popular yet inconsistent welfare programs and launch a highly questionable mega-mining project. Needless to say, there’s plenty of criticism to be made, particularly when it comes to some of his more hair-brained proposals. It likewise goes without saying that the Maduro administration is in a tough position, and the situation it faces is complicated – to say the least.

Luckily, former Chief Economist of the Inter-American Development Bank Ricardo Hausmann has a simple solution to what he claims is a ‘humanitarian crisis’. This claim itself is pretty hard to justify, given that serious experts on the matter largely agree that Venezuela’s downturn is nowhere near the level of ‘humanitarian crisis’. Nonetheless, things are bad in Venezuela; so bad, that Hausmann went as far as invoking a WWII reference, calling for a “D-Day Venezuela”.

Before we get into the meat of things, I’d like to congratulate Hausmann on his hilarious D-Day comparison; you know you’re in for a fun ride when Godwin’s law has already been Blitzkrieged before we’ve gotten past the headline. Presumably, the reader is supposed to fill in the blanks by concluding that the Hitler to Hausmann’s ‘D-Day’ is Maduro.

Not exactly the most intellectually formidable of starts, but, let’s hear Hausmann out, shall we?

“As solutions go, why not consider the following one: the National Assembly could impeach Maduro,” Hausmann suggested, beginning on a relatively tame note.

“The Assembly could constitutionally appoint a new government, which in turn could request military assistance from a coalition of the willing, including Latin American, North American, and European countries. This force would free Venezuela, in the same way Canadians, Australians, Brits, and Americans liberated Europe in 1944-1945,” he argued.

“My guess is in most of these instances the Venezuelan military are going to back down because they know they are completely outgunned, so it doesn’t make any sense for them to fight,” he said in a follow-up interview.

Even better, he argued the plan could circumvent the need for United Nations approval, as the foreign military forces would have technically been invited by the newly installed regime.

It all sounds so simple, until you realise Hausmann’s plan would undoubtedly create a humanitarian disaster that would make the current economic downturn look positively delightful.

Seeking to justify foreign intervention, Hausmann himself looked to the 1989 US intervention in Panama as a model.

“It would be akin to the US liberating Panama from the oppression of Manuel Noriega, ushering in democracy and the fastest economic growth in Latin America,” he stated.

Fun fact: anywhere from a few hundred to 4000 Panamanian non-combatants were killed during the intervention. In the aftermath of the violence, even the Washington lapdogs at Human Rights Watch couldn’t contain their horror at the conduct of US forces.

“[Estimates of the civilian death toll] reveal that the ‘surgical operation’ by American forces inflicted a toll in civilian lives that was at least four-and-a-half times higher than military causalities in the enemy, and twelve or thirteen times higher than the casualties suffered by US troops,” HRW noted in a grim 1991 report.

The report continued, “By themselves these ratios suggest that the rule of proportionality and the duty to minimise harm to civilians, where doing so would not compromise a legitimate military objective, were not faithfully observed by they invading US forces.”

Of course, Panama is not comparable to Venezuela. For one, anyone unfamiliar with geography may not realise Panama is absolutely tiny; in 1989, it had a population of less than 2.5 million. 2018 Venezuela, on the other hand, is more than 12 times larger, with a population of over 31 million. So if we assume Hausmann’sintervention is carried out with a similar level of relative brutality to that of Panama, the death toll could easily be in the thousands.

There’s a reason Hausmann had to look back almost three decades to find an example of a military intervention he liked; indeed, recent Western military interventions are typically far more brutal than anything Panamanians were subjected to. So far, the invasion of Iraq (a country of more comparable population size to Venezuela, at 37 million) and subsequent epoch of endless violence have left somewhere between 180,000 and 201,000 civiliansdead. Meanwhile, the equally endless war in Afghanistan has inflicted a combined human toll of 173,000 dead across the country and in neighbouring Pakistan. Even the least brutal intervention in recent memory, that of Libya, saw coalition forces directly massacre dozens of civilians, and failed to stop the deaths of up to 20,000 people in that country’s civil war. Today, Libya is now in its second civil war since the intervention, with around 6,000 casualties so far, while slave auctions have popped up throughout the country as a chilling illustration of the catastrophe of Western intervention. It’s worth noting Libya was marketed to the public as an intervention lite, without boots on the ground and with an explicit mandate from the UN to protect civilians. Of course, Hausmann’s proposed intervention in Venezuela would have no such mandate, and would include putting foreign troops in the streets of Caracas. If you’ve ever spent much time in Caracas, then you probably already know that’s a recipe for disaster. I don’t know about you, but I wouldn’t want to be caught in gringo military fatigues in a staunchly Chavista barrio. In fact, no matter what side of the political spectrum you happen to be on, I think we can all agree that a sizeable chunk of Venezuela’s population would never tolerate such a foreign occupation, and a fierce anti-imperialist insurgency would be inevitable.

This brings me to my next key point. As the perceptive reader may have noticed, there’s a common pattern among Western interventions: they’re all followed by years – if not decades – of horrific internal conflict and instability. Any rational observer would assume the same would be true of Venezuela, a deeply divided country with an extremely complex political situation. Hausmann himself should be aware of this, given his impressive résumé.

A former Venezuelan planning minister, he is today a professor of economics at the Harvard Kennedy School and Director of the Centre for International Development at Harvard University. Needless to say, his academic credentials and familiarity with Venezuela would lead one to presume he should already understand everything I’ve mentioned here. The same could be said for virtually all prominent voices demanding direct intervention in Venezuela. With decades of data under our collective belts, the question of whether or not military intervention can be conducted humanely is well and truly settled. Intervention is just a polite term for mass murder.

Returning full circle to our unabashed allied assault on Mike Godwin’s most sacred of laws, odds are Hausmann’s suggested intervention would bear no noteworthy similarities to the liberation of Europe from the Nazi nightmare. In fact, forget ‘D-Day Venezuela’ entirely: more appropriate WWII comparisons would bear names like Fall Rot, Fall Weiss, Barbarossa and Fall Gelb.

Alas, it should be clear that suggesting an armed intervention in Venezuela is about as mature as trying to construct an argument based on an intellectually lazy allusion to Nazism. Think what you will of him, but Maduro is no Hitler, and a Venezuelan D-Day would be a bloodbath on a scale the country hasn’t seen for a very long time (if ever).

So when it comes to Venezuela, there is no solution but peace. Anyone who says otherwise must be called out for exactly what they are: dangerously ignorant at best, warmongers at worst.