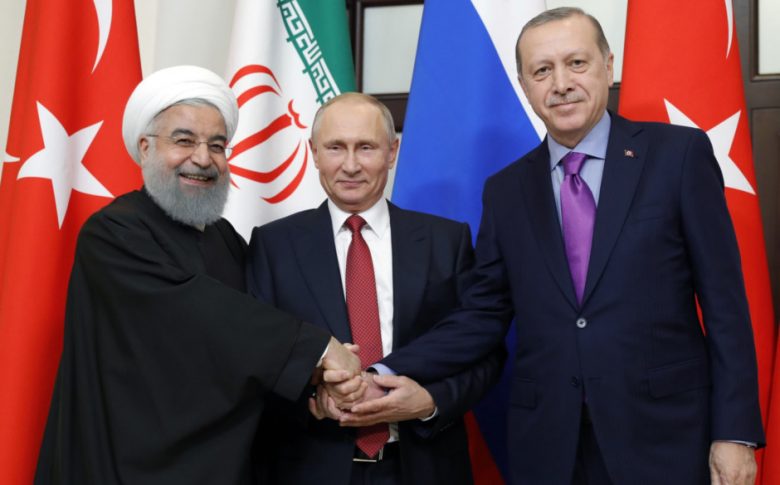 With the “Khashoggi affair” still making headlines and continuing to alienate MbS, this article – written just before the G20 Buenos Aries summit –  assess the ways in which President Erdoğan is using this as an opportunity to increase the influence of Turkey, Iran, Russia and Qatar.

It seems that the quartet (US, Israel, UAE and MbS himself, naturally), acting in the cause of ‘exonerating MbS’, think they have got their ‘coup’ with Trump’s “maybe he did, but maybe he didn’t”, exculpation. They are probably quite pleased with themselves. MbS may stay for now, and embarrass everyone at the G20, by ostentatiously trying to shake hands with leaders, in front a phalanx of photographers, as leaders try to dodge the tainted hand. But if MbS does weather the crisis, what it shows more than anything else is how well MbS has succeeded in destroying the al-Saud family as a joint leadership ‘enterprise’, and in undercutting Saudi Arabia’s Islamic credentials. President Trump and Jared Kushner – quite oblivious – colluded in this outcome.

And the outcome: Yes, as Pepe Escobar, lately was being told in Istanbul: “The Erdogan machine has sensed a once-in-a-lifetime opportunity [i.e. l’affaire Khashoggi], to simultaneously bury the House of Saud’s shaky Islamic credibility, while solidifying Turkish neo-Ottomanism, but with an Ikhwan [i.e. with a Muslim Brotherhood – style] framework”. This is heady stuff – maybe the Arab world is not so anxious to welcome back, with open arms, either the Ottomans or the Muslim Brotherhood. But nonetheless, with the Gulf so discredited in terms of its legitimacy, Erdogan is probably right to think that he is pushing at an ‘open door’.

And strategic interests are giving Erdogan a strong tail-wind in his bid. Erdogan has secured – as part of the package to try to get Turkey to ‘lay-off’ with its Khashoggi drip-drip leaks – an end to the Saudi siege on Qatar. It is possible too, as part of the deal, that the Qatari Emir (we are told) might visit Riyadh in the near future, and that some sort of cold – very frigid – reconciliation will be conducted with MbS. The point is that Qatar is greatly beholden to Erdogan for ending the siege (and for the earlier stationing of Turkish troops in the Emirate, to protect it, against any Saudi attack), and like Turkey, the Emir is a generous Muslim Brotherhood patron.

Turkey also enjoys a close strategic relationship with Iran (though they have their differences over Syria). The two states have a strong shared interest in seeing an end to American forces occupying parts of Syria, and putting a stop to the Israeli-sponsored Kurdish ‘project’ in the region. And again the Muslim Brotherhood enters into this equation — the latter’s flirtation with Saudi Arabia is finished, and parts of the movement (it is still fractured from the Gulf-led war against it) are returning to old comrades: Hizbullah and Iran (the Muslim Brotherhood never parted from Turkey). In short, the Muslim Brotherhood seem destined to become Turkey’s Arab foot-soldiers in the battle to take the mantle of Islamic leadership away from Saudi Arabia.

Beyond the convergence of political interest however, there is oil and gas too. Russia is the mastermind here, with Turkey acting as the putative pivot. Moscow is quietly stitching together a new energy axis: Qatar had already injected needed cash into Russian oil giant, Rosneft, giving it a substantial stake in the latter – as well as providing Rosneft with the means to buy into Egypt’s huge Zohr gas field. And Qatar is co-operating closely with Iran on exploiting their shared North Dome/South Pars gas field (the largest in the world) in the Persian Gulf – with Qatar recently, substantially expanding its LNG facilities. Iraq too has just agreed to co-ordinate oil and gas operations with Russia.

It is not hard to see what is afoot here: This week Russia completed the link to the ‘pivot’ (Turkey) – the undersea gas pipeline TurkStream, linking Russia with Turkey. As Pepe Escobar notes, “TurkStream is projected as two lines, each capable of delivering 15.75 billion cubic meters of gas a year. The first will supply the Turkish market. The second will run 180 km to Turkey’s western borderlands and supply south and southeast Europe, with first deliveries expected by the end of next year. Potential customers include Greece, Italy, Bulgaria, Serbia and Hungary”.

And phase Two? Well, soon the old plan of a regional pipeline from the Persian Gulf through Iran and Syria, to Europe (possibly via Turkey), may become again politically viable (i.e. in the interests of all parties in the new regional re-alignment.) What does this signify? It suggests that the Qatar-Turkey-Iran-Russia axis may dominate in Middle East energy production, pushing Saudi and the UAE into the place of ‘second fiddle’. And let us not ignore Iraq. Apart from its energy co-operation accord with Russia, Iraq has also just signed a free trade agreement with Iran – despite threats from American officials. (The efforts to keep Iraq within the US sphere of interest do not seem to be working well.)

The ‘once-in-a-lifetime’ opportunity given to Turkey ‘to bury the House of Saud’s Islamic Credibility, and to resurrect Istanbul’s ancient claim to leadership of the Islamic world’, naturally has stirred alarm and a deep sense of vulnerability in the Gulf.

MbZ is leading a push by the UAE, Kuwait and Bahrain to re-establish the ‘Arab prerogative’ in Syria – in order to ‘join’ with President Assad in pushing back non-Arab (i.e. Turkic and Iranian) influence across the Levant. (No doubt, part of this MbZ initiative is to distance, and to differentiate himself, from the now tainted MbS).

And the atmospherics across the Sunni Levant are today extremely hostile towards MbS, we hear from recent visitors to the region. It is putting into question the Custodianship of the two Holy Sanctuaries (Mecca and Medina): The Khashoggi barbarism has forced attention onto the issues of personal safety, as well to that of the financial exploitation of pilgrims at Mecca. Ordinary pious Muslims are questioning whether it is worth undertaking pilgrimage — there is a movement advocating for boycott. This aspect of popular outrage should not be underestimated: the Sanctuaries are a significant component of identity (together with Jerusalem).

MbZ’s initiative to try to ‘save’ the Levant from non-Arab influence may have the side-effect of returning Damascus to the Arab ‘fold’ (which is to say, its seat at the Arab League), and will be welcomed in Damascus on that account alone. Moreover, the initiative represents more broadly a political recognition of the region’s strategic realities by the Gulf. That too can only help in bringing about a broader internal reconciliation domestically, and the full marginalization of the jihadists in Syria.

But to look for more than that would be wishful thinking on the part of MbZ and his western advocates – we suggest. Syrians generally are not so open to the claims of pan-Arabism as they were in the past. They were, after all, betrayed by this Arab ideal, multiple times. The claim of a ‘greater Syria’ has dimmed, and a current of steely, Syrian, Arab nationalism is more evident. It will be a tougher, more assertive Syria that emerges from this ‘war’. Damascus may be open to Gulf rapprochement, but it will not suffer any lectures on the ideals pan-Arab nationalism from those who waged war against this ancient Arab nation, nor against those who supported Syria through its ‘dark nights’.

Those who are in the ‘quagmire’ now are not Russia (as Obama confidently forecast), nor Syria, nor its allies. The wheel has turned. It is now the Gulf States, fearful for their own futures, should the family al-Saud implode, who are in a quagmire of crumbling credibility, and legitimacy — and Israel, too, is in its own separate quagmire, albeit for different reasons. Israel deliberately opted for a path that pitted it aggressively up, and against, Iran, Syria, Iraq, Turkey (via Kurdish proxies), and Hizbullah. Netanyahu presumably hoped to capitalize on Trump’s lack of nous concerning the region, and on manipulating MbS’ overt ambition. Israel escalated this overt hostility (through hundreds of air incursions over Syria), to the point of clashing, and endangering the Russian military interest – by insisting Israel must freely, and regularly, bomb Syria.

Well, the Russian military command have ‘had it’ — enough of Israeli air incursions. They want stability in Syria. Netanyahu bet on leading Trump, Kushner and MbS — a slender, unrepresentative, stratum — into a remake of the region – and lost: Netanyahu lost Israel its freedom of the skies over the northern tier of the Middle East. Putin now declines a meeting with Netanyahu. Bibi has painted Israel into a corner where it now has to decide whether to risk ‘going for broke’ against much of the region and its Palestinian ‘subjects’; or, as Gulf leaders presently are doing in Damascus, acknowledge uncomfortable realities, and try to make do.

The other question is why does Erdogan pursue the drip, drip of Khashoggi evidence, when Trump and the European establishment would dearly like him to stop? Why does he not take what is on offer and shut up? Answer: because he too, was fearing being trapped in Turkey’s own particular quagmire. Khashoggi was the chance to turn the tables – and Erdogan is taking it.

Yes, Turkish rhetoric has been somewhat florid, but behind it lies substantive Turkish concerns: Erdogan can see that Turkey is being deliberately pressured at its maritime and land based borders, and has been subject to Lire and financial sanctions attrition internally (now halted – thanks to Turkey’s careful leaking of the Khashoggi evidence). On the maritime border, Erdogan can see plainly that Israel’s EastMed gas pipeline, via Cyprus to Europe, when completed, will likely leave Turkish North Cyprus bereft of pipeline revenues. He sees also the probing by western oil majors (pursuing EU/US interests), steaming into (disputed) waters claimed by Turkey and the Turkish-administered North Cyprus.

Then there are the Kurds, supported by Israel and European states, avidly trying to establish a Kurdish ‘belt’ for the length of Turkey’s southern border. And to the east, the new, pro-western colour revolutionary government of Nikol Pashinyan in Armenia. Pressure all around. All these exacerbated tensions, as well as the earlier financial attrition, spelled out a US containment policy – and even an eventual further coup being plotted against Turkey – in the Turkish assessment.

No wonder the euphoria in Istanbul. Erdogan is skillfully – and strategically – using Khashoggi ‘leaks’ dribbled out in the media. He is using them to exit from the threat of the Gulf-led project to plunge rival Turkey into a quagmire of encirclement, whilst watching at the same time, those who facilitated the attempted coup against him last year squirm (the Turkish press identified MbZ and MbS in particular as facilitators) – as the vice of crumbling credibility tightens on them, inverting the paradigm.