Introduction: (go to the weblink above to view all of the charts)

Global wealth somewhat dropped in 2015 due to the strong US dollar, according to the “Global Wealth Report 2015.” The underlying situation nevertheless remains positive, though wealth inequalities have continued to widen. 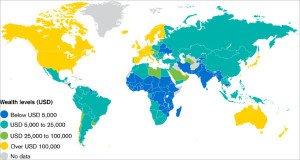 Global wealth reached 250 trillion US dollars in 2015, slightly less than a year earlier, due to adverse exchange rate movements. The underlying wealth trends do, however, generally remain positive, according to the Credit Suisse Research Institute’s annual “Global Wealth Report.” The rise in household wealth was particularly strong in the US and China between mid-2014 to mid-2015. “Wealth is (nevertheless) still predominantly concentrated in Europe and the United States. However, the growth of wealth in emerging markets has been most impressive, including a fivefold rise in China since the beginning of the century,” said Credit Suisse CEO Tidjane Thiam. China now accounts for a fifth of the world population, while holding nearly 10 percent of the global wealth. The Chinese middle class is now, for the first time, the world’s largest.

(Chart: The middle class per country (in million adults))

Wealth inequality has widened in the aftermath of the financial crisis and this year was no exception. This year’s rise in equity prices and in the size of financial assets in high-wealth countries pushed up the wealth of some of the richest countries and people, resulting in increased wealth inequality. The top percentile of wealth holders now own just over half of the world’s wealth and the richest decile 87.7 percent. “While the distribution of wealth is skewed towards the wealthy, the considerable economic importance of the base and middle sections (of the wealth pyramid) should not be overlooked. Together, they account for 39 trillion US dollars in wealth, driving a significant part of demand for a wide range of consumer goods and financial services,” Thiam underlined. To be part of the wealthiest half of the world’s adult population, you need 3,210 dollars once debts have been subtracted. (See figure) To be a member of the world’s wealthiest 10 percent you need 68,800 dollars and to be among the richest percentile, 759,900 dollars.

Global wealth is likely to continue grow at an annual rate of 6.5 percent in the coming years, reaching 345 trillion US dollars in 2020, 38 percent above the current level of wealth. The US will remain the undisputed leader in terms of wealth, holding nearly a third of the global total. The main drivers behind the continued wealth growth are, however, located in the emerging economies. (See figure) Their share of the global wealth could rise to 19 percent by 2020, from 17 percent today. Both China and India are likely to post annual growth rates above 9 percent in the five coming years. They have together managed to double their share of global wealth to 10.5 percent over the past 15 years. Chinese wealth growth has been particularly strong: In 2000, the size of Chinese wealth was similar to that of the US back in 1939. Fifteen years later, Chinese wealth stood at the level the US had reached in 1972 (33 years later!) and the wealth of the country’s households could well continue to leapfrog the growth rates of developed economies. As a result, the number of Chinese dollar millionaires is expected to reach 2.3 million by 2020, a 74 percent increase compared to today. Globally the number of dollar millionaires is set to soar by 46 percent over the next five years, to a total of 49.3 million adults with 22 million of these living in North America, 15.5 million in Europe and 8 million in Asia Pacific (excluding China and India) – an additional 15.5 million dollar millionaires in just 5 years. To put this figure in perspective, this group of dollar millionaires will still only account for 0.7 percent of the world’s adult population.

(Chart: Evolution of the wealth share in emerging markets)

The term wealth is defined as the value of financial assets plus real estate (housing) owned by the households, less their debts throughout the Credit Suisse Wealth Report. The study focuses on the wealth held by the adult population across more than 200 countries, from billionaires at the top of the wealth pyramid to the middle and bottom sections of the pyramid. The analysis comprised the wealth holdings of 4.8 billion adults. It did not include the relatively small amount of wealth owned by children on their accounts.

Except from ‘Global Wealth Report 2015’ report by Credit Suisse, on page 53 of 64 page report:

Russia experienced rapid growth in household wealth during the early years of this century, fueled by world demand for the natural resources that it has in abundance. Between 2000 and
2007, wealth per adult rose eightfold. Since 2007, however, growth has been slow and uneven – up 13% to date in ruble terms, but down 50% when measured in current USD, due to ruble depreciation. Most of the depreciation occurred during the last year. The USD-RUB rate rose from 25 in 2007 to 34 in mid-2014 and then went up to 55 by mid-2015. While household wealth per adult has risen from USD 2,920 in 2000 to USD 11,730 today, the current level is barely above the level achieved a decade ago.

The quality of wealth data for Russia is mixed. Financial balance sheets are available and indicate that gross financial assets average USD 2,490. There is less information on real assets, but the available evidence suggests to us that nonfinancial assets currently amount to USD 11,300 per adult. Personal debt grew rapidly in the period 2000–2007 and more slowly after that. We estimate that it now equals 15% of gross assets – up from 12% last year.

According to our calculations, the top decile of wealth holders owns 87% of all household wealth in Russia. This is significantly higher than any other major economic power: the corresponding figure is 76% for the United States, for example, and 66% for China. The very high level of wealth inequality in Russia is reflected in the fact that it has 92,000 US dollar millionaires and 122,000 individuals in the global top 1% of wealth holders. It is also well endowed with billionaires, of whom there are an estimated 90. 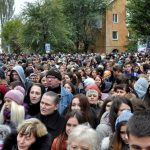 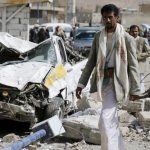