As the Queen Elizabeth aircraft carrier heads to the South China Sea laden with state-of-the-art fighter jets, JENNY CLEGG warns of the dangers of this provocative manoeuvre

The HMS Queen Elizabeth aircraft carrier strike group is due to set off on its maiden voyage heading towards the South China Sea.

The biggest military deployment in decades, the voyage is symbolic of Britain’s future direction for the next generation — a clear demonstration that Global Britain with its Indo-Pacific tilt is being military-led.

There’s a certain air of imperial vanity about all this — a delusional fantasy singing to the tune of right-wing nationalism.

But there is a hard edge here as Boris Johnson’s return “east of Suez” takes on particular significance in the new scenario of a cold war on China.

The aircraft carrier itself is massive, its flight deck the length of three football pitches.

It is kitted out with state-of-the-art technologies and is carrying 18 F-35 fighter jets — 10 of these are from the United States Air Force.

The group contains three destroyers, again one of which is American, two frigates and a nuclear-powered submarine armed with Tomahawk missiles.

The cost is huge: over £6 billion for two aircraft carriers together, plus £1bn spent so far on the F-35s.

We are supposed to buy 138 in total which makes an additional £13bn — a colossal misallocation of funds much of which were squeezed out from the taxpayers in the name of austerity.

Involving 1,600 personnel altogether, the running costs alone amount to 15 per cent of the military budget or by rough calculation £8bn or £9bn.

The route travels through the Mediterranean, the Suez Canal, the Gulf, round India then up through the Malacca Straits into the South China Sea, passing numbers of trouble spots on the way.

The 28-week voyage will take in 90 port visits in 40 different countries — more than a fifth of the world’s nations — with the aim of rebuilding military and diplomatic relations.

With fighter jets, destroyers and the latest naval technology on display, and Merlin helicopters and drones on board, there’s an arms sales element, and in a further boost to Britain’s military industrial complex, BAE Systems is to assist Japan and South Korea in building fighter jets.

Along the way, the strike group will serve as a focal point for regional joint military exercises.

The military manoeuvre planned in the South China Sea with the US and probably other states, possibly even Japan, will be highly provocative and dangerous.

The area is a tinderbox: as warships and coastguard vessels mill around in the waters, there is a high risk of accident which could rapidly escalate into war — in which case, we could find ourselves in armed conflict with another nuclear-armed state.

Global Britain has been in the pipeline for years: the decision to build the aircraft carriers, just like the renewal of Trident, came from the same place as the command to launch the war on Iraq, namely, the Tony Blair government.

As can be seen from the involvement of US personnel and military hardware to boost the QE’s firepower, nothing could be further from the truth.

The Indo-Pacific tilt follows the US plans for an “Asian Nato” initiated by Donald Trump in the form of the Quadrilateral Security Dialogue — the Quad — involving Australia, US, Japan and India.

This loose grouping was intended to draw India into a closer relationship with the US, hence the term Indo-Pacific.

Quad diplomacy has now been made a priority by Joe Biden who, within his first 100 days in office, upgraded the dialogue into a heads of state meeting.

At the same time, his success in involving Japan in military drills indicates a hardening of the Quad agenda.

Biden so far has not changed Trump’s key policies on China: not on tariffs, not on restrictions on Chinese tech companies, holding to the view of China as the “greatest strategic challenge” to the US.

He has even stepped up the action sending warships and destroyers into the Taiwan Straits and, taking a more ideological approach, he clearly aims to shift international opinion against China as an existential threat to the entire world.

The US Establishment has been taking stock: the unipolar moment has gone; China clearly was able to withstand Trump’s pressure.

Recognising the US can no longer go it alone, hard-line cold warriors are calling on key allies to form a single economic, technological and military bloc — a “summit of democracies” aligned according to America First priorities and sharing the military costs of the agenda — so as to exert enough pressure on China to bring it to heel, subordinate to US leadership.

Biden’s distinctive global China containment strategy is unfolding in a reordering the regions of Asia, looking to finally demolish the cornerstones of their post-war and post-colonial order: in the Middle East, the division between the Gulf states and Israel over Palestine; the principle of non-alignment long held by India; south-east Asia’s military independence, and Japan’s Article 9 of the constitution, known as the Peace Clause, by which it renounced war as a sovereign right.

Claiming “Britain is back” as it travels across Asia — through the Middle East, India, south-east and east Asia, the aircraft carrier group will in reality be delivering the “warlord” agenda of world division.

Global Britain will bolster its military presence in the Middle East to allow the US to focus more on China and seek ways to influence India’s dialogue with China on issues such as Afghanistan, nuclear deterrence, vaccines and so on.

In south-east Asia, the strike group will mark the 50th anniversary of the Five Power Defence Arrangement that Britain has with Singapore, Malaysia, Australia and New Zealand, in an exercise designed to shift towards a Nato-style alliance long sought by the US.

And through the renewal of military links, Britain will encourage the Japanese to actively participate overseas in regional naval exercises, breaking the post-war constraints.

The Anglo-Japanese link has historical significance given that it was the alliance with Britain that saw Japan’s emergence an aggressive militarist imperialist state in the early 20th century.

Travelling from the Middle East in a wide semi-circle round China to Japan, the armada is symbolic of Britain’s new role as subcontractor-in-chief of US anti-China foreign and military policy.

How will China react? It should be noted that even the announcement that the Queen Elizabeth would sail through the South China Sea back in February 2019 saw China cancel the visit by the trade secretary at the time.

It seems beyond the wit of the vast majority of Labour MPs to take all this in.

However, what trade unions and the labour movement need to think about is whether, given the precarious state of the economy post-Brexit, we can really afford to run the risk of more serious rupture with the fastest-growing economy in the world. 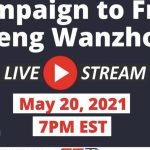 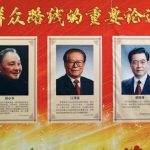 No Great Wall: on the continuities of the Chinese RevolutionChina, Communist Party of China