Glenn Greenwald: Yet another major Russia story falls apart. Is skepticism permissible yet? 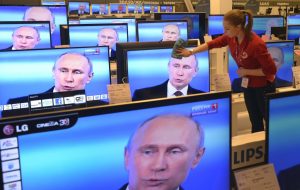 The following article by Glenn Greenwald (weblink to the full article is above) should be read in conjunction with the September 26 article by Robert Parry appearing in Consortium News: The rise of the new McCarthyism, and Parry’s newest article appearing on September 28: The slimy business of Russia-gate.

Parry, unlike Greenwald, describes the broad ideological embracing of a new McCarthyism by the near entirety of the ‘liberal’/Democratic Party wing of the U.S. ruling class. To be clear, while Democratic Party ideologues are calling for stepped up threats and action against Russia, Donald Trump and the Republican Party are acting on such calls by increasing sanctions against Russia and Crimea, increasing support to the right-wing government in Ukraine, stepping up intervention in Syria and, of course, making unprecedented threats of genocide against the Korean people.

The accusations by Democrats of collusion between Russia and Trump are a monstrous charade. Conveniently for Democratic Party warmongers, such accusations mask the very real dangers of the anti-Russia actions of the Trump administration. The phrase ‘two peas in a pod’ has never been more true in describing a two-party electoral setup in the United States. The setup has become more vacuous and more dangerous than ever.

Yet another major Russia story falls apart. Is skepticism permissible yet?

Last Friday, most major media outlets touted a major story about Russian attempts to hack into U.S. voting systems, based exclusively on claims made by the Department of Homeland Security. “Russians attempted to hack elections systems in 21 states in the run-up to last year’s presidential election, officials said Friday,” began the USA Today story, similar to how most other outlets presented this extraordinary claim.

This official story was explosive for obvious reasons, and predictably triggered instant decrees – that of course went viral – declaring that the legitimacy of the outcome of the 2016 U.S. presidential election is now in doubt. Virginia’s Democratic Congressman Don Beyer, referring to the 21 targeted states, announced on Twitter that this shows “Russia tried to hack their elections”: “The same day @realDonaldTrump refers to ‘Russia Hoax’, Homeland Security Dept. tells 21 states that Russia tried to hack their elections.”

MSNBC’s Paul Revere for all matters relating to the Kremlin take-over, Rachel Maddow, was indignant that this wasn’t told to us earlier and that we still aren’t getting all the details. “What we have now figured out,” Maddow gravely intoned as she showed the multi-colored maps she made, is that “Homeland Security knew at least by June that 21 states had been targeted by Russian hackers during the election. . .targeting their election infrastructure.”

They were one small step away from demanding that the election results be nullified, indulging the sentiment expressed by #Resistance icon Carl Reiner the other day: “Is there anything more exciting that [sic] the possibility of Trump’s election being invalidated & Hillary rightfully installed as our President?”

So what was wrong with this story? Just one small thing: it was false. The story began to fall apart yesterday when Associated Press reported that Wisconsin – one of the states included in the original report that, for obvious reasons, caused the most excitement – did not, in fact, have its election systems targeted by Russian hackers: ‘Feds now say that Russians did NOT hack Wisconsin’s voter registrations system’ (Associated Press).

The spokesman for Homeland Security then tried to walk back that reversal, insisting that there was still evidence that some computer networks had been targeted, but could not say that they had anything to do with elections or voting. And, as AP noted: “Wisconsin’s chief elections administrator, Michael Haas, had repeatedly said that Homeland Security assured the state it had not been targeted.”

Then the story collapsed completely last night. The Secretary of State for another one of the named states, California, issued a scathing statement repudiating the claimed report:

Sometimes stories end up debunked. There’s nothing particularly shocking about that. If this were an isolated incident, one could chalk it up to basic human error that has no broader meaning.

But this is no isolated incident. Quite the contrary: this has happened over and over and over again. Inflammatory claims about Russia get mindlessly hyped by media outlets, almost always based on nothing more than evidence-free claims from government officials, only to collapse under the slightest scrutiny, because they are entirely lacking in evidence.