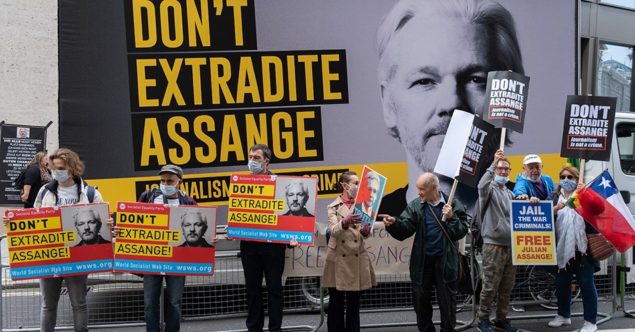 Calls for Julian Assange to be pardoned by US president Donald Trump are on the rise with activists, journalists, writers, campaigners, and politicians from across the ideological spectrum joining the chorus demanding that the WikiLeaks publisher to be freed during the final days of the current administration.

German legislators have formed the “Free Julian Assange” working group amid growing calls for the WikiLeaks publisher to be pardoned by US president Donald Trump.

Christian Mihr of Reporters Without Borders, which has been monitoring Assange’s extradition hearings, announced the formation of the cross-party group in the Bundestag on 21 December 2020.

We wish to send a clear signal for the protection of freedom of expression and freedom of the press, endangered by the threat of extradition of Julian Assange,” the MPs said in a press release announcing the group.​

The letter says that the working group was founded “​out of great concern for the life of journalist and WikiLeaks founder Julian Assange, who has been in solitary confinement and in critical condition for over 18 months at the high security Belmarsh prison in the UK and whose extradition to the US is to be decided upon on 4 January 2021.”

Frank Schwab from the Social Democratic Party is also quoted in the letter as saying:

“Julian Assange published classified information about corruption and war crimes. Freedom of the media is a basic prerequisite for a functioning democracy.”

Assange’s mother, who recently announced that she would stop using social media for her own good, nonetheless took to Twitter to thank the MPs and others for all their hard work on the issue.

The announcement from Germany comes at the same time that a group of Australian MPs and senators signed an open letter to President Trump calling on him to either pardon Assange or drop the prosecution case against him. “Assange has fought for truth and justice. His work with WikiLeaks has pioneered accountability by the media and exposed corruption, civil liberties violations in the United States and around the world, and the true cost of war,” the politicians write.

“For this work, he has been nominated for the Nobel Peace Prize every year for the past decade and has been celebrated around the world,” the letter reads.

The letter also argues that Assange has “already suffered a great deal and been detained for a decade” while also noting that he “is a son, a brother, a partner, and a father to two young children who have only known their father to be in detention.”

Calls for Trump to pardon Assange have increasingly come from surprising sources, including the former Republican Governor of Alaska Sarah Palin who is reportedly close to Trump and once called for the Australian to be treated like a member of al-Qaeda.

Not only does Sarah Palin apologize for public mobbing against Julian Assange—in 2010, she said hunt him down like an al Qaeda terrorist—but she also offers more clear position on one of most alarming cases against global press freedom than virtually all progressives in Congress https://t.co/B1Vw4GCv08

“Please, use your power of pardon to right the wrongs inflicted on Julian Assange, to end his unjust ordeal and reunite him with his family!” pic.twitter.com/oUj2jCzgNw

Assange faces up to 175 years in prison in the US if he is convicted on all of the charges brought against him. The US indictment pertains to his role in publishing documents in 2010 and 2011 revealing, among other things, war crimes and other criminality and malfeasance via the Iraq war logs, Afghanistan diaries, Guantanamo Bay detainee files, and US diplomatic cables.

Mohamed Elmaazi obtained his LLB from SOAS and Masters in International and Comparative law from the American University in Cairo. He worked in human rights law for a number of years before shifting to journalism. Before joining Sputnik he published with numerous media outlets including The Real News Network, Open Democracy, The Grayzone Project and The Canary.

Headline photo: Supporters of Wikileaks founder Julian Assange protest outside London’s Old Bailey court as his fight against extradition to the U.S. has resumed, on September 7, 2020, in London, England. Assange has been in Belmarsh Prison for 16 months and is wanted over the publication of classified documents in 2010 and 2011. If convicted in the US, he faces a possible penalty of 175 years in jail. (Photo: Richard Baker/In Pictures via Getty Images)