The truth about the Maidan massacre is still kept in the dark.

A year has passed since the terrible violence at Maidan Square in Kyiv, the sniper massacre of Feb. 20, 2014. Since then, only one culprit has been named  – Russia and the evil demon rumored to soon conquer the whole world – President Putin. As all these stories are presented by the ‘democratic’ Western media, people believe them without question. Although  there has been no investigation carried out, and no evidence found, people in the West are so badly brainwashed that they simply accept what they hear on radio and television.

German central TV channels have recently presented a ‘new ‘ old story explaining the sniper killings on Maidan Square. But it seems that this is just President Poroshenko who is speaking on the German television, not the channel hosts.

On the anniversary of the massacre, the ARD network presented a new, incredible propaganda story from the House of Poroshenko. The aim of its film story is to explain the reality and reasons for those events, which the puppet masters now in power in Kyiv do not wish to refer to for understandable reasons. But the story not only mocks the truth, it mocks the victims of the events.

It is grotesque and self-explanatory that there has been no serious investigation into the shooting of protesters and security forces on Maidan Square until now. It is the key event of the militant coup of February 2014. Obviously, it was not protesters who made the elected president Yanukovych flee. Having demonstrated for weeks, and being very numerous, even, at some points of time, they nonetheless never represented even closely the majority of the 44 million people of Ukraine. The violent coup, which all those in the West, who now loudly accuse separatists or Russia of alleged law violations, embroider as a democratic revolution; this violent coup happened at the time of the shootings started on the Maidan Square. The escalation that followed, a violent threat to the life of Yanukovych, were caused by a gang of murderers.

Although the names of the perpetrators may never be known, the intent and result of their actions and the unwillingness of today’s ruling junta to investigate these acts are unquestionable signs to those who were killing there and are now protected. If there were even remotely serious reasons to believe that the Ukrainian security forces were responsible for the massacre, the current junta would – supported by the EU – hold a public investigation. However, because the shots came from territory occupied by the protesters, there is no decent investigation. The EU remains silent about those killings, including that the so-called ‘interim government’ after the coup placed into office a prosecutor general whose fascist origins [Oleh Ihorovych Makhnitskyi, member of the Svoboda Party] suggest close ties with the perpetrators.

Therefore, everything was done to hide the real story of this massacre in defiance of great pressure from Ukrainian citizens. Only the perpetrators and their backers can have an interest in hiding the story.

To thwart everything else, the Maidan oligarchs and current President Poroshenko have devised a new story that is very welcomed by the so-called journalists of ARD: ‘It was Russia!’

It defies any common sense, but it is obviously not too ridiculous to be foisted on German viewers as the latest ‘explanation’ by the professional liars Horst Kläuser from WDR and Golineh Atai in the daily news. Finally, there have been so many other crazy and blank stories about Russian tank battalions everywhere in the world, and so another crude tall tale will he no less enjoyable.

The rest of the article is a rough translation:

Horst Kläuser in his comment in yesterday’s “Echo of the Day” argues a bit cautiously. He is, of course, aware that this is outrageous nonsense, to which there is not the slightest evidence. But his job is to manipulate the listener and this includes misrepresenting nonsense as truth, nonsense which the Kiev authorities regularly claim as transparent reasons:

What will be said in ten, twenty years about the shots on Maidan, where over one hundred of people died in a hail of bullets from snipers? An overreaction? A planned provocation? The last violent convulsion of the Yanukovych government? Or could it even have been the Russian secret service, ordered to create a climate in which the annexation of the Crimea and the subsequent armed conflict in eastern Ukraine would not seem illogical?

On the same evening, ARD professional liar Golineh Atai presents the same nonsense in the prime time news. Instead of asking and searching for the answer as to why there has been no investigation on the occasion of the sniper anniversary, Atai blabs the newest Poroshenko’s fairy tales to the whole world. What could deter the so-called journalist from going to the prosecutor’s office and ask questions? Why could Atai’s colleague from ZDF, Anne Gelinek, who travels regularly from Moscow to Brussels, not take her lazy ass today to Brussels and ask why there is no pressure from the EU members on the candidate country Ukraine to clarify this massacre?

Golineh Atai lying again: ‘President Poroshenko blamed the Russian secret service for the mass murders on Maidan. A power … an advisor to President Putin had commanded the special units a year ago here on Maidan, he said’ (Mediathek, from 6: 25min) 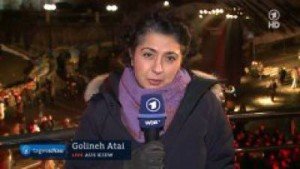 You have to look only at Atai’s face expressions and stuttering to understand that she knows that this is a complete nonsense, that she is lying there in front of the millions of German viewers in the world.

Later in the braodcast, Poroshenko is presented to viewers in person, trumpeting another insane lie to the world. We remember about the allegedly destroyed Russian tank battalions, of which no one has ever got even a speck of dust on his face, and Russian invasions that have taken place only in the tangled head of the oligarchs and the liars media of the West. Poroshenko: ‘The Attorney General has finally gained access to the recordings of telephone calls from ex-President Yanukovych with representatives of Russian secret services. Imagine: together, yes, together they prepared the shootings on Maidan’ (Mediathek, from 7:56min)

It must not be underestimated that this propaganda will be bought by citizens, who have been fed with the lies, concealment and distortion, and have been incited against Russia by the Western media for months. Even if a properly informed and reasonable man can recognize Poroshenko’s self-protecting lies immediately, propaganda will not lose its effect on the mass of viewers, and it has been working very effectively in the German and European politics for months.

The confusing, eighteen-minute documentary footage of the sniper massacre on Maidan Square on Feb. 20, 2014: 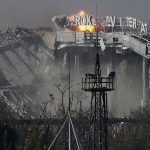 In photos: The destruction of the Donetsk airportDigest, Ukraine