A German-Russian trade organization has called for sanctions against Moscow to be ended, calling them politically ineffective. Business leaders have complained about shrinking trade and investment opportunities.

The Wall St. Journal reports on Aug 25, 2015 that German exports to Russia tumbled by 31% during the first half of the year. The value of exports dropped to €10.5 billion ($12.15 billion) , compared to €15.2 billion during the first six months of last year, according to Ostauschuss, German industry’s lobbying arm for Eastern Europe. 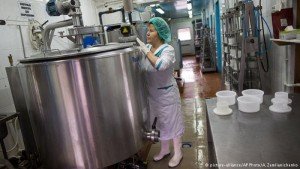 German and Russian business leaders say they want to see a speedy end to sanctions imposed by the West on Russia as a result of the Kremlin’s perceived role in the Ukraine conflict. They also called for Russia to end the sanctions on imports from Europe that the Kremlin has imposed in response.

A poll among members of the German-Russian Chamber of Foreign Trade (AHK) showed Tuesday that roughly two-thirds of respondents viewed the sanctions in place as “politically ineffective.” Almost half of those polled said the sanctions – especially financial market sactions – hampered their business activities.

“We strongly appeal to policymakers to avoid getting sucked in deeper into the sanctions spiral,” said AHK President Rainer Seele.

German exports to Russia accounted for 1.76 per cent of overall shipments abroad, down from 3.28 percent before the start of the Ukraine conflict in 2013. Over the same period, imports from Russia dropped from 4.59 per cent to 3.27 per cent of the total value of goods purchased abroad.

“We’d seen a certain decline before the crisis started,” Seele said, but the sanctions greatly accelerated the process.

Only 15 per cent of respondents called Russia’s economy stable at present, with assessments reaching their lowest level in ten years. Every third German company among the survey respondents said it was likely to cut jobs in Russia, should there be no major economic improvements this year. Seele said a recovery of the Russian economy would not be seen before the middle of next year.

In a further turn of the sanctions spiral, in Moscow on Tuesday, Russia’s consumer protection agency announced a ban on imports and sales of some European detergent brands, alleging contraventions of harmful substances regulations and increased complaints about allergic reactions by Russian consumers.

Russia earlier this month prolonged a ban on numerous categories of food imports from the West, a measure it had introduced a year ago in retaliation for Western sanctions against Russia. 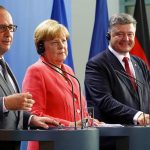 ‘Minsk peace deal on Ukraine must be respected’ – Merkel after talks with PoroshenkoDigest, Ukraine 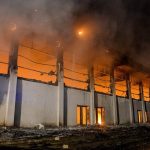