Gaza 2020: how easy it is for the world to delete Palestinian pain 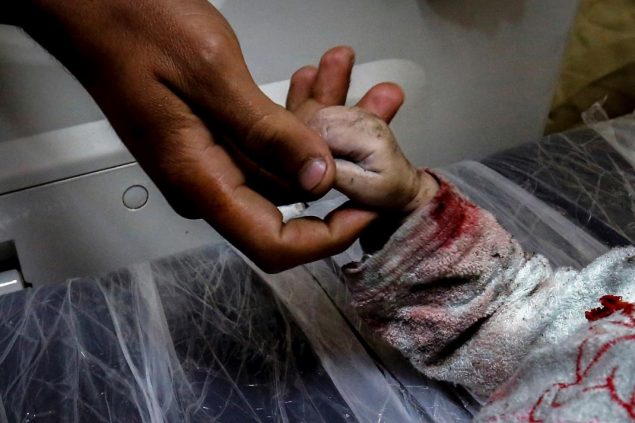 A man holds the hand of Maria al-Gazali, a 14-month-old Palestinian baby, as her body lies on a stretcher at a hospital in Beit Lahia, northern Gaza on 5 May 2019. She died during an Israeli air strike (AFP)

The UN said in 2012 that Gaza would be unlivable by 2020. Israel has contributed to this deliberately… What has to happen for this to change? For how much longer will we delete, as Google apparently does, Gaza, its refugees, its daily suffering from the collective consciousness of the world?

I would like you to try an exercise. Google the words  “family of eight killed” and you will be given several options – one in Sonora, Mexico, another in Pike, Ohio, yet another in Mendocino County, California.

But Google’s massive memory seems to have suffered amnesia over what took place just one month ago in Deir al-Balah, Gaza.

To recap, because you, too, may have forgotten: on 14 November, an Israeli pilot dropped a one-tonne JDAM bomb on a building where eight members of one family were sleeping. Five of them were children. Two of them were infants. 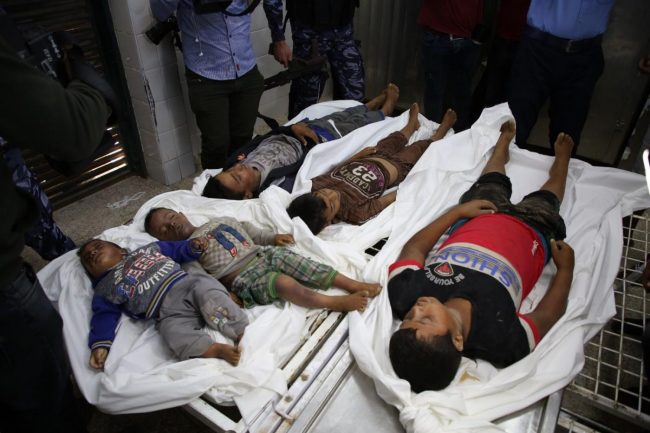 At first, the Israeli army tried to lie its way out of responsibility for the killing of al-Sawarka family (one other family member has since died of injuries, taking the total to nine). Its Arabic-language spokesman claimed that the building was a command post for an Islamic Jihad rocket-launching unit in the central Gaza Strip.

However, as Haaretz revealed, the target was at least a year old. The intelligence was based on rumours, and no one had bothered to check who was living inside that building: they just dropped the bomb anyway.

The Israeli army need not have bothered lying. No one took any notice

Military intelligence capable of identifying and hitting moving targets like Bahaa Abu al-Atta, the Islamic Jihad’s commander in the northern Gaza Strip – or attempting to kill Akram al-Ajouri, a member of its political bureau in Damascus – is simultaneously incapable of updating its target bank from one year ago.

The Israeli army need not have bothered lying. No one took any notice. Neither the exchange of rocket fire nor the killing of the Sawarka family made the front pages of the Guardian, New York Times or Washington Post.

This is Gaza now: a brutal siege of a forgotten people subsisting in conditions predicted to be unlivable by the UN in 2020, a year that is just a few weeks away.

It is inaccurate to say that the deaths of the Sawarka family were met with indifference in Israel.

Benjamin Netanyahu’s sole rival for the leadership is Benny Gantz. Anyone in western capitals mistaking Gantz for a peacenik, merely because he is challenging Netanyahu, should look at a series of campaign videos the former Israeli army chief published recently about Gaza.

One of them starts with the sort of footage that a Russian drone could have taken after its bombardment of East Aleppo. The devastation is like Dresden or Nagasaki. It takes a disturbing few seconds to realise that this horrendous drone footage is a celebration of destruction, not an indictment of it.

Its message in Hebrew is unambiguous for what is considered in international law a war crime. “Parts of Gaza were returned to the stone ages… 6,231 targets destroyed… 1,364 terrorists killed… 3.5 years of quiet… Only the strong win.”

Indifference is not the right word. It is more like jubilation.

Israel’s suffocation of Gaza predates the siege that started when Hamas took over in 2007. As Israeli writer Meron Rapoport has said, Israel’s leaders have long harboured genocidal thoughts about what to do with the enclave that they chased all those refugees into after 1948.

‘The idea is to put the Palestinians on a diet, but not to make them die of hunger’

In 1967, former Israeli prime minister Levi Eshkol set up a unit to encourage Palestinians to emigrate.

“Precisely because of the suffocation and imprisonment there, maybe the Arabs will move from the Gaza Strip… Perhaps if we don’t give them enough water they won’t have a choice, because the orchards will yellow and wither,” he suggested, according to declassified minutes of cabinet meetings released in 2017.

In 2006, Dov Weisglass, a government adviser, said: “The idea is to put the Palestinians on a diet, but not to make them die of hunger.”

The Rafah crossing as relief valve

The passage of time has not dulled nor modified these sentiments.

The difference today is that Israeli leaders no longer feel the need to disguise their thoughts about Gaza. As Gantz did, they say out loud what previously they had said or thought in private. 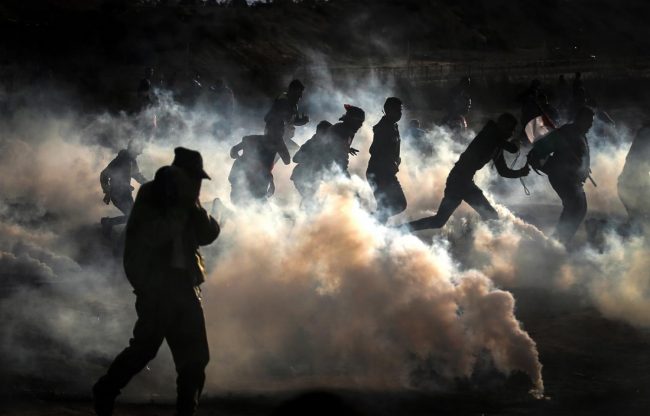 Tony Blair, the former Middle East envoy for the Quartet, engaged in his own diplomacy by offering Hamas a sea port and airport in exchange for an end to the conflict with Israel. It did not get anywhere.

Hamas has independently offered a long-term hudna or ceasefire and changed its charter to reflect a settlement based on the June 1967 borders of Palestine. But it has refused to decommission or hand over its armed forces. Fatah and the PLO ended up on a path to decay and political irrelevance since they each recognised Israel’s existence. That does not provide much of an incentive for Hamas and the other resistance groups in Gaza.

Throughout, the oscillation between jaw-jaw and war-war, and the interests of other parties to the siege of Gaza, have also become apparent. At times, these parties have been more Catholic than the pope in wishing to see Gaza and Hamas brought to heal.

One of them is Egypt under the military-led rule of Abdel Fattah el-Sisi.

The Gaza crossing is a tap. Close it and you put political pressure on Hamas

In 2012, under president Mohamed Morsi’s rule, an average of 34,000 people passed through the Rafah crossing every month. In 2014, after Sisi came to power, the border with Egypt remained closed for 241 days. In 2015 it was shut for 346 days – and open for only 19 days. Sisi has operated the border crossing at Rafah very much in the manner of Israel itself.

The crossing is a tap. Close it and you put political pressure on Hamas by denying the dying access to proper medical care. Open it and you relieve the pressure on the inmates of this giant prison.

A third collaborator to the siege is the Palestinian Authority itself. According to Hamas, since April 2007, the PA has cut the salaries of its employees in Gaza, forced 30,000 of its public servants into early retirement, reduced the number of medical permits to receive treatment abroad, cut medicines and medical supplies. The salary cuts are largely undisputed .

The cumulative effect of the siege on the enclave is devastating, as MEE has reported this week.

Imagine how the international community would react if in Hong Kong or New York, two other similarly crowded territories, unemployment was 47 per cent, the poverty rate 53 per cent, the average class size was 39 and the infant mortality rate at 10.5 per 1,000 live births.

The international community has grown used to absolving Israel of any accountability for collective punishment and gross human rights abuses.

But surely the point now is that Gaza must be considered a human stain on the conscience of the world.

By neglect, or default, all western governments have actively contributed to its misery. All are deeply complicit in an inhuman experiment: how to keep more than 2 million people on a level of subsistence considered intolerable and unlivable by the UN, without tipping them over into mass death.

What has to happen for this to change? For how much longer will we delete, as Google apparently does, Gaza, its refugees, its daily suffering from the collective consciousness of the world?

David Hearst is the editor in chief of Middle East Eye. He left The Guardian as its chief foreign leader writer. In a career spanning 29 years, he covered the Brighton bomb, the miner’s strike, the loyalist backlash in the wake of the Anglo-Irish Agreement in Northern Ireland, the first conflicts in the breakup of the former Yugoslavia in Slovenia and Croatia, the end of the Soviet Union, Chechnya, and the bushfire wars that accompanied it. He charted Boris Yeltsin’s moral and physical decline and the conditions which created the rise of Putin. After Ireland, he was appointed Europe correspondent for Guardian Europe, then joined the Moscow bureau in 1992, before becoming bureau chief in 1994. He left Russia in 1997 to join the foreign desk, became European editor and then associate foreign editor. He joined The Guardian from The Scotsman, where he worked as education correspondent.
Editors’ Note: While we don’t necessarily share the views we publish on New Cold War, we do attempt to provide readers with a range of views. This is because your right to make your own mind up depends on your being fully informed.
Share
Tweet
Share
Pin