Galapagos Islands will now serve US military as airfield 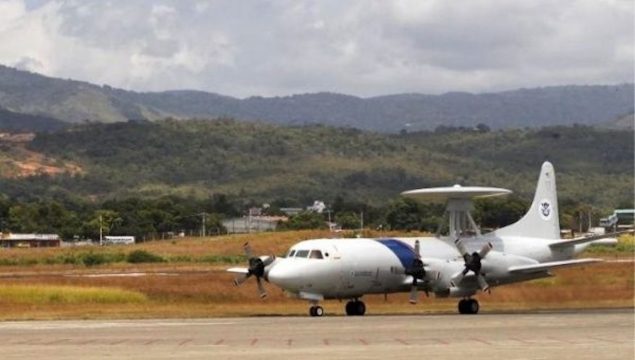 A US Lockheed P-3 Orion variant is seen at Tocumen international airport during an organized media visit in Panama City March 8, 2016. | Photo: Reuters

U.S. military planes will have access to the airport of San Cristobal in the Galapagos Islands, based on “cooperation” agreements, for the world heritage site, signed under Lenin Moreno’s administration.

Ecuador’s right-wing government has agreed for the United States (U.S.) to use the airport of San Cristobal, in the Galapagos Islands, as an airfield for U.S. air force and navy Pacific ocean operations, according to the Minister of Defense Oswaldo Jarrin.

“Galapagos is Ecuador’s natural aircraft carrier because it ensures permanence, replenishment, interception facilities and is 1,000 kilometers from our coasts,” he assured, explaining that now U.S. military planes will also have access to it based on “cooperation” agreements signed under Lenin Moreno’s administration to “fight drug trafficking.”

On September 2018, a Lockheed P-3 Orion intelligence-gathering plane from the U.S. Customs and Border Protection agency began to operate from Ecuador. While a Boeing 707 aircraft from the U.S. air force, carrying a long-range radar surveillance and control center (AWAC), will now also be “patrolling” the Pacific. Both operations are reminiscent of those made by the U.S. government from the Base in Manta from 1999 to 2009.

“A base means permanence, there will be no permanence of anyone, the P3 and Awac will meet periods no longer than a week,” Jarrin argued. Yet he himself said on Aug. 27, 2018, that “the important thing is to recognize that everything that the base did in its time, can now be done by just one plane, because of the advance of technology.”

Despite the technicalities of such “cooperation” any presence of foreign armies in Ecuadorean territory is unconstitutional. According to article five of the 2008 Constitution, Ecuador declares itself as a territory of peace, where “the establishment of foreign military bases or foreign installations for military purposes will not be allowed. In addition, it is prohibited to cede national military bases to foreign armed or security forces.”

No, Mr. Minister. Galapagos is not an “aircraft carrier” for the gringos to use. It is an Ecuadorean province, world heritage, patriotic ground.

In what seems like an attempt to appease critics, the defense official, emphasized that the readjustments to the airfield will be paid by the U.S. Yet once again history warns that this is no sort of “assurance.”

In 1942, as the U.S. was just entering World War II both in the Pacific as the western front, another right-wing government in Ecuador allowed the U.S. army and navy to use the Island of Baltra, in the Galapagos, as an airfield. An airstrip was constructed, houses, barracks, movie theaters and dining halls for the armed personel and families, all paid by the U.S.

However, in 1946 as the U.S. left they bombed and destroyed everything leaving nothing behind for the Ecuadoreans.