By New Cold War.org, May 5, 2015–A large rally took place in Paris, France on May 2, 2015 in commemoration of the victims of the Odessa Massacre of May 2, 2014. World renowned, classical pianist Valentina Lisitsa participated in the rally. She gave a moving, five-minute interview which has been broadcast on YouTube. The interview is in English and is sub-titled in French. Watch the interview here, or click on the screen below. From the interview: 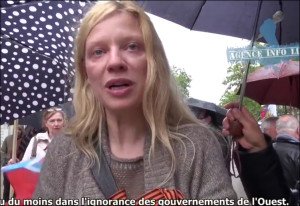 “[In Ukraine], people are being groomed to hate. And that’s the biggest humanitarian disaster of all, because … all those people being killed, eventually this creates deep wounds of hate. That’s the biggest war crime, a crime against humanity. That is what the current government of Ukraine is perpetrating, unfortunately with the help, or at least with the ignorance, of Western governments.

“I think the tide is truly turning. I am just one of the small drops of water which, over time, winds its way through the stone and opens the stream. I’m really hopeful for the best.”

(See note below on the cancellation of Valentina Listisa’s planned concerts in Oakville (Toronto), Canada this month. She will perform in Calgary, Alberta on June 5 and 6. Here is an article on her appearance last month in Spokane, Washington.

* Valentina Lisitsa’s concerts planned for May 8 and 9 in Oakville (Toronto region), Canada have been cancelled after she discovered that the offer to organize them was insincere. An article reports on this and a statement by her on Facebook is forthcoming.

View:
Photo gallery of May 2, 2015 commemoration in Odessa, Ukraine (published on TASS) 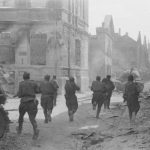 Whose victory will Ukrainians celebrate on May 9? The pseudo-historical Ukrainian propaganda over WWIIBackground, Feature Articles, Halyna Mokrushyna, Ukraine 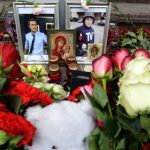