Filmmaker Patrick Lancaster has filmed the aftermath of heavy Ukrainian shelling against the Kirovsky district of Donetsk city on August 27, 2015. 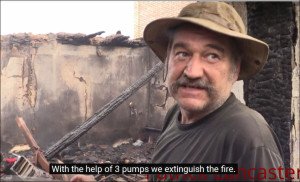 He speaks to the residents who suffered the shelling (English sub-titles). They express their anger at the Ukrainian government and army and plead for an end to shelling.

Watch the video, 11 minutes long, here or by clicking the screen below.

Here is an excerpt from the daily report for August 27, 2015 of the Special Monitoring Mission of the OSCE (emphasis added):

The overall security situation at and around “Donetsk People’s Republic” (“DPR”)-controlled Donetsk airport (9km north-west of Donetsk) remained tense. From its position at the Joint Centre for Control and Co-ordination (JCCC) observation post at the “Donetsk People’s Republic” (“DPR”)-controlled central railway station (8km north-west of Donetsk city centre), the SMM observed an increase in ceasefire violations compared to the previous day. Between 08:25 and 18:30hrs, the SMM recorded a total of 162 explosions caused by incoming anti-aircraft fire, 82mm and 120mm mortar shelling and other unidentified explosions at locations between 1.5 and 8km ranging from the north-north-west to the west of the SMM’s position. The SMM also heard exchanges of small-arms fire, including machine-gun fire and automatic grenade launcher fire, between locations at 3 to 5km north-north-east and west-south-west of its position. The SMM also observed five Ural and Kamaz military type trucks driving in the direction of Donetsk airport. Two were carrying “DPR” members and one was carrying logs.

… The overall situation in Luhansk was relatively calm.