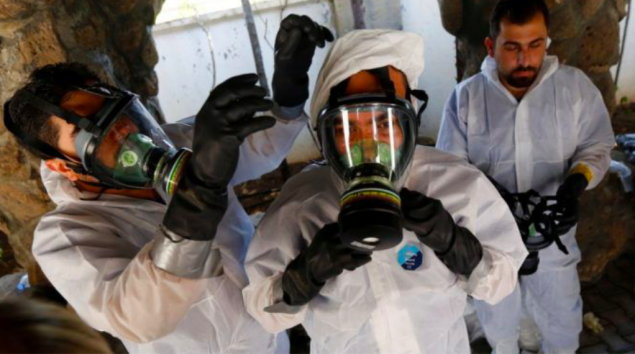 The OPCW is facing renewed questions after fresh details emerged about how it has suppressed the findings of its own inspectors who raised serious doubts about an alleged poison gas attack in Syria.

The global chemical weapons watchdog is facing renewed questions after fresh details emerged about how it suppressed the findings of its own inspectors who raised serious doubts about an alleged poison gas attack in Syria.

The Mail on Sunday can reveal that a senior official at the Organisation for Prohibition of Chemical Weapons (OPCW) demanded the ‘removal of all traces’ of a document which undermined claims that gas cylinders had been dropped from the air – a key element of the ‘evidence’ that the Syrian regime was responsible.

Unconfirmed reports and videos showing the bodies of adults and children foaming at the mouth in Douma, a rebel-held Damascus suburb, shocked the world in April 2018. 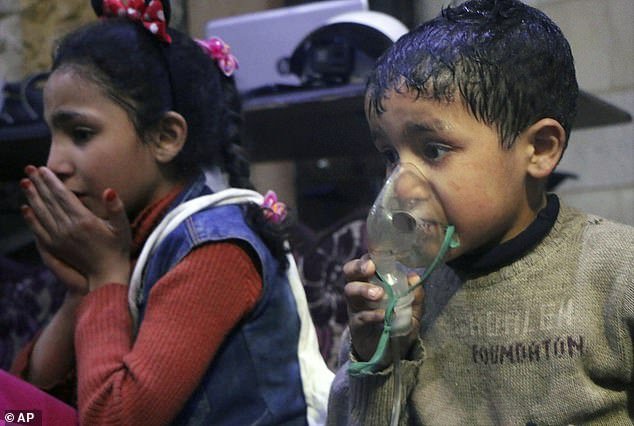 Children are pictured after the attack. Alleged casualties shown in videos of the attack were foaming at the mouth in a way that might be expected of victims of sarin, but not by victims of chlorine. Yet all the reports agree that no traces of sarin were found at Douma. Photo: AP

A week later, without waiting for proof that chemical weapons had been used, Britain, France and the US launched a retaliatory missile strike, the biggest Western military action of the eight-year war.

It was only after the blitz that a team of OPCW inspectors – non-political scientists – were able to visit Douma to investigate the attack, later detailing their conclusions in a report.

Last month, The Mail on Sunday revealed details of a leaked email – whose authenticity has since been verified by the OPCW – which protested that the scientists’ original interim report had been censored to change its meaning.

Fernando Arias, Director-General of the OPCW, has insisted that he stands by ‘the independent, professional conclusions’ of the organisation’s final report which was released in March.

But this newspaper has now obtained the team’s original, uncensored interim report which differs sharply from all later versions, including the March document.

That final report claimed there were ‘reasonable grounds’ that chlorine gas was used in Douma, but an OPCW whistleblower says only tiny quantities of chlorine were detected in forms possible to find in any household.

The original interim report also mentioned for the first time doubts about the origin of the cylinders, saying: ‘The FFM [Fact-Finding Mission] team is unable to provide satisfactory explanations for the relatively moderate damage to the cylinders allegedly dropped from an unknown height, compared to the destruction caused to the rebar-reinforced roofs.

‘In the case of Location 4 [one of two sites where a cylinder was found], how the cylinder ended up on the bed, given the point at which it allegedly penetrated the room, remains unclear.’

The report called for further studies to clarify the point. One such study was then conducted by Ian Henderson, a veteran OPCW inspector and specialist chemical engineer with military experience.

In it, Mr Henderson, who visited the Douma site, cast severe doubt on the belief that the cylinders had been dropped from the air. This was crucial because only the Syrian regime had aircraft.

If the cylinders could be shown to have been dropped from above, it would strongly point to Syrian President Bashar Assad’s guilt.

However, after careful consultation with other experts, Mr Henderson concluded there was a ‘higher probability that both cylinders were manually placed … rather than being delivered from aircraft’.

But perhaps most shocking of all were the actions of a senior OPCW official whose name is known to The Mail on Sunday and who is known to some of the organisation’s staff as ‘Voldemort’.

Mr Henderson tried to get his research included in the final report, but when it became clear it would be excluded, he lodged a copy in a secure registry, known as the Documents Registry Archive (DRA).

This is normal practice for such confidential material, but when ‘Voldemort’ heard about it, he sent an email to subordinates saying: ‘Please get this document out of DRA … And please remove all traces, if any, of its delivery/storage/whatever in DRA’.

Another striking omission from the final report was the removal of detailed evidence (contained in the original interim report). This highlighted dramatic inconsistencies in witness statements.

This evidence, clear in the interim report, was, according to the sources, replaced with ‘cherry-picked’ quotes from witnesses and ‘there was no systematic presentation of the discrepancies’.

The uncensored original interim report raises other doubts about the chlorine claim, saying: ‘The inconsistency between the presence of a putative, chlorine-containing choking or blood agent on the one hand and the testimonies of alleged witnesses and symptoms observed from video footage and photographs, on the other, cannot be rationalised.’

The final report omitted key reservations, expressed in the original interim report, that the symptoms seen in films of the alleged victims did not fit any gas that might have been used at Douma.

Alleged casualties shown in videos of the attack were foaming at the mouth in a way that might be expected of victims of sarin, but not by victims of chlorine. Yet all the reports agree that no traces of sarin were found at Douma.

These doubts were confirmed by expert toxicologists consulted by the OPCW investigation team on a visit to Germany in June 2018.

They concluded ‘there was no correlation between symptoms and chlorine exposure’.

In a key passage it adds ‘the team considered two possible explanations for the incongruity.

‘A) The victims were exposed to another highly toxic chemical agent that gave rise to the symptoms observed and has so far gone undetected.

‘B) The fatalities resulted from a non-chemical-related incident.’ In other words, either the victims died from an unknown, undetected gas for which no evidence exists or there never was a chemical attack.

Sources stress that the scientists involved are ‘non-political, utterly uninterested in any strategic implications of what they reveal’.

They just ‘feel that the OPCW has a duty to be true to its own science, and not to be influenced by political considerations as they fear it has been’.

An internal memo seen by The Mail on Sunday suggests that as many 20 OPCW staff have expressed private doubts about the suppression of information or the manipulation of evidence.

The OPCW media office now declines to respond to questions from The Mail on Sunday.

Senior OPCW staff members who were contacted directly also did not reply to questions.

Leaked email claims UN watchdog’s report into alleged poison gas attack by Assad was doctored. Was it to justify British and American missile strikes on Syria?