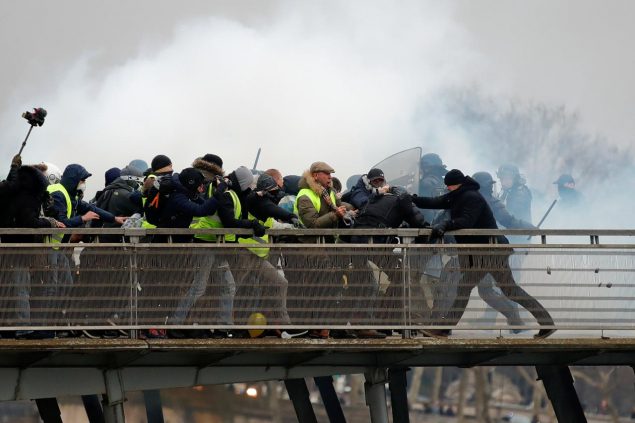 Former French boxing champion, Christophe Dettinger (R), is seen during clashes with French Gendarmes at a demonstration by the “yellow vests” on the passerelle Leopold-Sedar-Senghor bridge in Paris, France, January 5, 2019.. REUTERS/Gonzalo Fuentes

In January, Christophe Dettinger, a “yellow vest” protester and former professional boxer, was arrested for punching a riot police officer. Of the nearly nine thousand individuals who donated money to support him, at least 50 have received summons from the Paris police.

The French police are summoning for questioning individuals who donated money to support Christophe Dettinger, the “yellow vest” protester and former professional boxer arrested in January for punching a riot police officer.

The state’s actions emerged on June 11 as individuals began sharing the e-mail summons they had received from the Paris police on Facebook. At least 50 people have received a summons so far, but the real number could be much higher. More than 8,800 people donated to the fund.

Those who stated that they could not attend the interview were requested to provide written answers to the following questions: “For what reason did you pledge a donation to the fund in support of Christophe Dettinger? On what date did you make the donation, and what was the motivation for the fund on the web site?”

The obvious implication is that those who donated to the fund to support Dettinger and his family are implicitly funding a criminal act. The government’s actions are aimed at intimidating and criminalizing political opposition to the government and its policies of austerity and militarism. These are the actions of a police state.

The police requested and obtained the full list of names of donors from Leetchi, the private crowd-sourcing web site owned by the gigantic bank Crédit Mutuel. A friend or relative of Dettinger had used the site to set up a donation fund in January. All the donors had been told that their donations were being made anonymously. Those who have been summoned received the notice in the form of a mass e-mail, which additionally divulged the private e-mail addresses of 30 or 40 other people.

“Now hearts and minds will be probed to know why people donated to the fund. It’s almost the political police, or the thought police,” said Laurence Léger, the lawyer for the Dettinger family, to Europe1.

Dettinger was arrested on January 11, two days after a video went viral on social media showing him confronting a group of police officers clad with riot masks and shields and punching one of them. Moments earlier in the video, the same police could be seen attacking a group of unarmed peaceful protesters with tear gas. A young woman in Paris attested at the time that Dettinger had intervened after she was attacked by police during the “yellow vest” protest and suggested that he may have saved her life.

In February, Dettinger was sentenced to a year in prison, served in semi-liberty with an ankle bracelet.

The outpouring of popular support for Dettinger on social media (all the donations, totaling over $130,000, were made in less than 48 hours) triggered a furious and hysterical campaign from the Macron government, which launched a nationwide manhunt, raiding Dettinger’s home before he turned himself into police.

Marlène Schiappa, the secretary of equality between men and women, demanded that Leetchi close the fund and called for everyone who had donated to it to be publicly identified.

“It would be good to know who donated to this, because I think it’s a form of complicity,” she told Franceinfo. “We have here someone who has committed very grave actions, who hit a policeman exercising his functions, who was maintaining the public order—it is outrageous. To support that is to be complicit in the act and encourage it.”

The decision by Leetchi/Crédit Mutuel to hand over donors’ personal information is only the latest act in the bank’s vindictive persecution of Dettinger and collaboration in the Macron government’s police crackdown.

Crédit Mutuel stopped accepting donations within 48 hours of the fund being opened, specifically citing public “pressure,” and has additionally frozen all the money and refused to hand it over to Dettinger. It dismissed as “a lawyer’s response” the public statement by Leetchi from only a day earlier that pointed to the legality of the fund.

The bank is now attempting to justify its vindictive refusal to provide a single cent of the hundreds of thousands of dollars that were given to assist Dettinger and his family by claiming that the fund should only have been used for legal defense fees.

The fact that more than 8,800 donors to the fund have now been registered by the police makes clear that the government’s campaign against Dettinger was always directed against the entire working class and criminalizing political opposition.

The transparent pretext for the police’s act of mass intimidation is an official investigation by the Paris prefecture following a legal suit by more than 50 donors against Leetchi, demanding that it perform its duty by providing the funds to Dettinger and his family as they had intended.

The legal suit, which was filed in mid-April, reportedly states that the donors wanted to “show the solidarity of the people of the ‘yellow vests’ ” and were “extremely shocked” by the attitude of Leetchi, which had itself repeatedly publicly stated that the fund was legal before closing it. “By abusively retaining” the funds, it “conducts itself like a veritable moral censor,” they state.

Dettinger and his wife, Karine, have opened a second, independent lawsuit against Leetchi, pursuing it for damages for arbitrarily stopping donations to the fund after two days, although it was supposed to last for a month and a half. They are seeking damages of more than €3 million.

The ferocious response to Dettinger for striking a single police officer with his bare hands occurs in the context in which police continue to violently attack peaceful “yellow vest” protesters with tear gas, rubber bullets, baton charges and stun grenades.

At last Saturday’s “yellow vest” protest in Paris, World Socialist Web Site reporters met one of those who donated to the fund for Dettinger. Mikaël, who has worked as a technician at Electricité de France for 13 years, started attending the “yellow vest” protests in November, in order to oppose growing social inequality and the austerity policies of the entire political establishment. He has not yet received a letter of summons from the police. 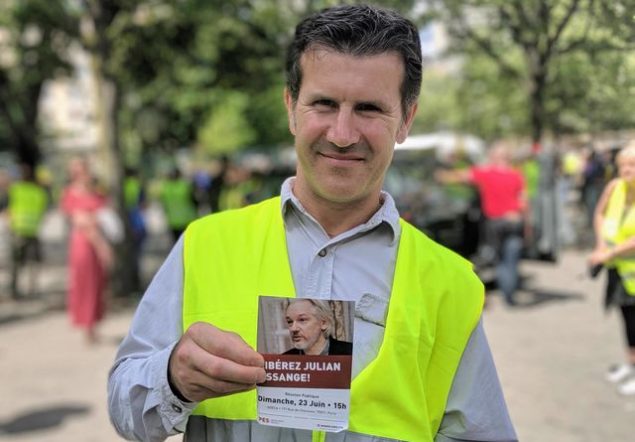 “I added a comment, and also a donation, to help Christoph and his family, to defend themselves, and to get by for day-to-day expenses,” he said. “I wanted to help the family and to let them know that we appreciated his action in seeking to defend protesters against the police attacks. It was a defense, and there was a woman on the ground.

“The government does not want the people to stand up against them, and that’s why this donation fund angered them so much,” he continued. “They said that if you approve of his actions, you are complicit. But then if one is complicit, then one can be prosecuted. That is what the government is saying.

“I was on the Champs-Elysées and I saw the gendarmes let people pass through, and then right away threw tear gas at them. They pushed and hit me. Someone next to me who had a tear gas mask was hit in the neck. I was hit in the legs. They are not listening to any of the demands, and now Macron is continuing with the same program from before December,” he said, referring to Edouard Philippe’s recent speech announcing cuts to pensions and unemployment payments.

The turn toward the criminalization of political opposition in France takes place in the context of an international build-up of police state forms of rule. Its most advanced expression is in the persecution of Julian Assange, the WikiLeaks founder, who is threatened with extradition to the United States for having exposed the war crimes and illegal activities of Washington and its allies.

Mikaël noted that the build-up of a police state in France was connected to the persecution of Assange and other whistleblowers internationally. “The state is terrified of the population, and it is hiding many things,” he said. “They are scared that we will discover what they are really doing. …”

“The officials in the United States are scared that Julian Assange will reveal information that will discredit them,” he said. “It’s horrifying that the United States wants to get hold of him and threaten him with execution.”

The Parti de l’Égalité Socialiste is holding a public meeting in Paris next Sunday to organize political opposition to the persecution of Assange and whistleblower Chelsea Manning on the basis of an international movement of the working class against capitalism, war and the drive to dictatorship.