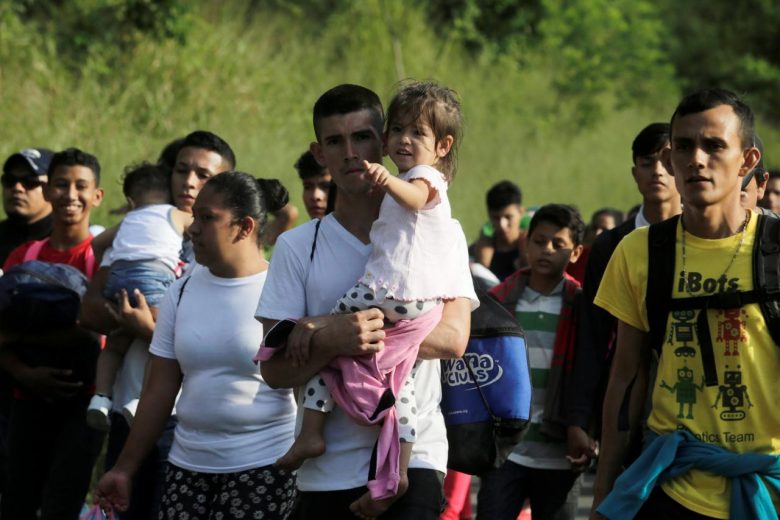 Washington blames “socialism” when Venezuelans flee their country’s US-created economic crisis, but defame Honduran refugees fleeing the misery created by the US in that country.

The United States must stop interfering in other nations and end its subversion of other countries’ democratic processes.”

There are an estimated 5,000 to 7,000 would be migrants moving in a caravan north from the border of Mexico and Guatemala. Men, women, and children are making a desperate effort to enter the United States where their families will be separated even as they seek asylum. This crisis makes a lie out of the Trump administration claim that those cruel measures would stop the flow of migrants. It also reveals how United States interventions have destroyed Honduras, the home of most of these refugees.

The hypocrisy of the corporate media in following official government narratives is also shown clearly in reporting of this story. When Venezuelans fled from the U.S. imposed economic destruction of their country we were told that their departures proved that socialism “didn’t work” and that the government was illegitimate. No such opinions are directed at United States proxies like Honduras.

There has been no serious discussion about the imperialist role that sent so many people here to seek safety.”

In 2009 the elected president Manual Zelaya was overthrown with support from Barack Obama and Hillary Clinton. Activists like the late Berta Caceres were murdered. That disruption has sent many waves of Hondurans to seek refuge in the United States yet there has been no serious discussion about the imperialist role that sent so many people here to seek safety. The dictatorship, disputed elections, and police state violence are never described as not working, even as the evidence of a failed state is clear.

This mass movement is a searing indictment of the U.S. role in destabilizing governments over many years. The wars against left wing movements and alleged wars against drugs created terror regimes that people want to flee any way they can. That effort goes on with recent U.S. backed attempts to overthrow the Nicaraguan government, a recurring effort since the days of Ronald Reagan.

The Trump administration defends its practice of separating children from their parents as a disincentive to stop asylum seekers. Surely this is no secret to the people who still hope to get inside what will be a prison for them. Yet their need is so great that they come anyway.

The wars against left wing movements and alleged wars against drugs created terror regimes that people want to flee any way they can.”

Any discussion of this crisis must be connected to Donald Trump’s very presence in the White Uouse. He is president in large part because he cast Latin immigrants as “rapists and murderers” who would be kept out by a wallhe would force the Mexican government to pay for. The inherently racist sentiment propelled him to the Republican nomination that even party insiders never thought he would get. Millions of people agree with him that citizens of “shithole” countries, that is to say non-white, must be kept out by any means.

There are many important questions to answer about immigration policy. Should this mass of people be admitted to this country? There are thousands of immigrants already living under threat of removal. The Trump administration recently moved to end Temporary Protective Status (TPS) for Haitians, Sudanese, Salvadorans and Nepalese. A federal judge blocked the Trump administration and granted a reprieve to the more than 200,000 TPS holders. It is the only just course of action for people whose countries would not be “shitholes” absent U.S. policy decisions.

Trump is president in large part because he cast Latin immigrants as ‘rapists and murderers’ who would be kept out by a wall.”

The men and women in the Central American caravan should be allowed to apply for asylum and they should not be separated from one another. But a just decision should be of greater significance than allowing people to enter the U.S. The United States must stop interfering in other nations and end its subversion of other countries’ democratic processes. The U.S. coup against the elected Honduran president began a cascading effect that now involves Guatemala and Mexico too.

Trump’s overtly racist anti-immigrant sentiments differ from those of most Americans only rhetorically. There is little support for admitting the Hondurans in the caravan or the thousands of other would be immigrants who are less visible. There is no useful discussion about immigration. It was the Ronald Reagan administration that supported an amnesty for the undocumented some 30 years ago. Now the Republicans who ordinarily revere any other action he took say no to anything except unrealistic plans to deport an estimated 11 million people.

The United States should be more generous to everyone, citizens and non-citizens alike. There would be less resentment of newcomers if people already here did not live in cut-throat competition with one another. A truly democratic United States would not destroy other countries and would do better by its own people. The migrant caravan and fear of it are proof of failure on both counts.

It was the Ronald Reagan administration that supported an amnesty for the undocumented some 30 years ago.”

In any case, most of the people in this group will never arrive at the United States border. They are now at the southernmost part of Mexico and face a 1,000 mile journey that will defeat most of them. Families with young children may be the focus of news stories, but most of them will return to their homes. The story is a sensational one that drives media attention and helps Trump whip up red meat for his supporters but it is rarely discussed in any meaningful way.

All over the world people want to leave their nations in favor of those where they have more opportunity. Intelligent discussion would involve examinations of war, imperialism, racism and the ravages of late stage capitalism. All of these issues drive immigration policy throughout the world. But for now Americans are fixated on a mass exodus of poor people without any understanding of what they are witnessing.