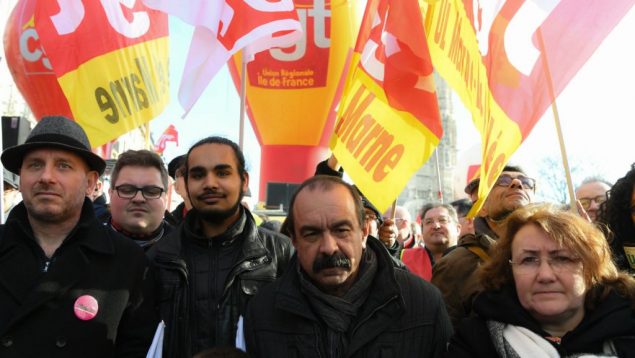 Alain Jocard, AFP | Secretary-General of the General Confederation of Labour (CGT) French worker’s union, Philippe Martinez (2nd R), takes part in a ‘Day of strikes’ called by the union in the French capital, Paris, on February 5, 2019.

Les Gilets Jaunes, or Yellow Vests movement, joined a march held by the CGT union as part of their on-going protests and demand for social justice and equality.

There were brief scuffles and police fired several rounds of tear gas at the Paris demonstration, clearing troublemakers from the elegant Place de la Concorde, which borders the US Embassy.

Tear gas was also used in Lille and elsewhere. However, tension was minimal compared with the weekly protests held since November by the Yellow Vest movement to demand fiscal and social justice in a major challenge to President Emmanuel Macron.

The Communist-backed CGT union marched from Paris City Hall to the Place de la Concorde side-by-side with protesters from the Yellow Vest movement, which takes its name from the safety vests they wear that are required in all vehicles.

Some 30,000 people, including many Yellow Vest protesters, demonstrated in the French capital on Tuesday, according to the CGT’s tabulation. The police prefecture, for its part, estimated 18,000 took part in the Paris demonstration.

Meanwhile, the Occurrence firm, mandated by a collective of media outlets including Agence France-Presse to provide independent counts during mass gatherings, said 14,000 protesters marched through Paris on Tuesday.