France’s crisis with the Muslim world was entirely avoidable 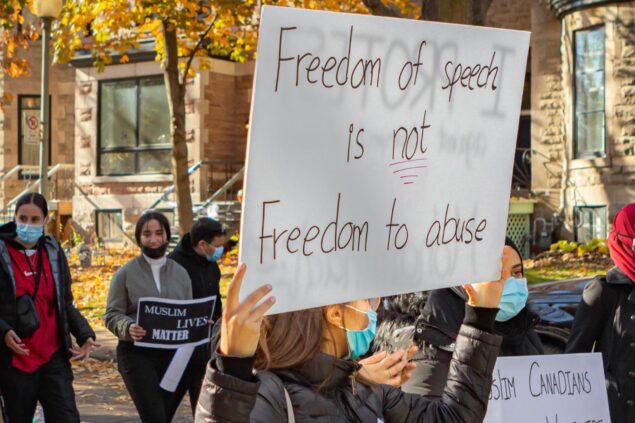 Protester with a sign “Freedom of expression is not freedom to abuse” in Montreal, Canada on 31 October (Reuters)

France is losing its global reputation and soft power, with its image now linked to provocation, hate speech and moral humiliation.

France has a simple explanation for the wave of outrage against it from across the Muslim world, noting that boycotts of French goods have been “pushed by a radical minority”. This statement, however, only poured more fuel on the fire.

The narrative of “radicalism” or merely an escalation by Turkish President Recep Tayyip Erdogan against his French counterpart, President Emmanuel Macron, is a grave reduction of what is really happening. Muslim consumers are boycotting French products in response to repeated insults against the Muslim faith and Macron’s defence of them.

But the French leadership does not want to acknowledge that it has humiliated the beliefs of many Muslims through a series of recent statements.

On 2 October, Macron claimed that Islam “is in crisis all over the world”, going way beyond the type of statement expected of the head of a secular state. He then proceeded to defend the contemptuous cartoons issued in his country against the Prophet Muhammad.

Macron has continued the insensitive tradition of his predecessors by singling out Islam in the discourse around religious fundamentalism, linking the religion to terrorism and extremism, and introducing a new inflammatory term: “Islamic separatism”.

The issue cannot be reduced merely to provocative cartoons. In France and elsewhere, hateful campaigns that specifically target Islam are being justified under the pretext of freedom of expression. That same freedom is ignored, however, when Muslims protesting insults against their religion are denounced as extremists. This selective interpretation of freedom of speech points to underlying prejudice and bigotry.

As hate speech against Muslims and Islam is increasingly wrapped in the flag of free speech, this defamation is becoming more ingrained in “the values of Europe” and “the civilised world”.

Yet, while the satirical newspaper Charlie Hebdo became famous for insulting the Prophet Muhammad and being attacked by militants for doing so, its material went far beyond this single issue; the publication once featured a caricature of a female Muslim student leader portrayed as a monkey.

The French government clearly underestimated the outrage that would resound in the Muslim world by its recent statements. Macron could have avoided this crisis without detracting from the principle of free expression, as former US Secretary of State Hillary Clinton did in 2012, when she described an anti-Islam film as “reprehensible”.

At the time, western leaders were choosing their words with extra care amid the Arab Spring. Macron, however, belongs to a newer political era, after authoritarian rule was re-established in Arab countries that witnessed uprisings. Ironically, France rolled out the red carpet to some of these tyrants after they crushed democracy in their own countries. 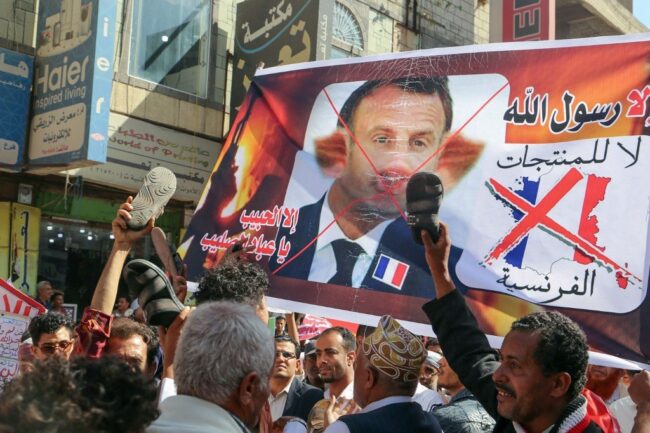 Demonstrators lift a banner depicting Macron as a pig in Taiz, Yemen, on 31 October (AFP)

Arab and Muslim peoples are well aware of this cynicism. The French government’s justification of anti-Islam rhetoric under the pretence of free expression is accompanied by widespread French cooperation with Arab regimes that suppress the basic rights of their citizens. The political leadership in Paris is not interested in improving the situation for politically repressed peoples, nor for French Muslim citizens – the largest Muslim presence in Europe.

Macron is currently in an uphill battle with the far right, and he may lose his next electoral bid to extremist politician Marine Le Pen. This requires him to take increasingly hardline positions against Muslims in his country, revealing the extent to which the far-right is capable of steering the public discourse.

Surrounding Macron are those who express discontent over matters as simple as halal products at French supermarkets, with Interior Minister Gerald Darmanin recently saying he was shocked by the existence of dedicated halal aisles.

These dominant voices in French politics have apparently failed to consider France’s political and economic interests in Muslim-majority countries, blindly assuming that those facing political repression have no voice. Instead, Muslims infuriated by the sight of French products in their stores have expressed their discontent through a civil movement.

Inappropriate statements by French politicians are nothing new. In 2018, former Interior Minister Gerard Collomb expressed concern over a student covering her hair on a French television station, saying it was “different from French society”. Such statements have become the norm in France, revealing the country’s deep crisis in dealing with its religious and ethnic diversity.

The value of the recent boycott campaign exceeds France’s anticipated economic losses; it lies mainly in its moral losses. France is losing its global reputation and soft power, with its image now linked to provocation, hate speech and moral humiliation. It reminds us of the country’s past colonial atrocities, which France continues to sweep under the rug.

Although the leadership in Paris does not dare admit it, its own misbehaviour and misjudgment has placed France at the centre of an international crisis that could have been avoided.

Hossam Shaker is a journalist and an author who has extensively covered the topic of migration in Europe.