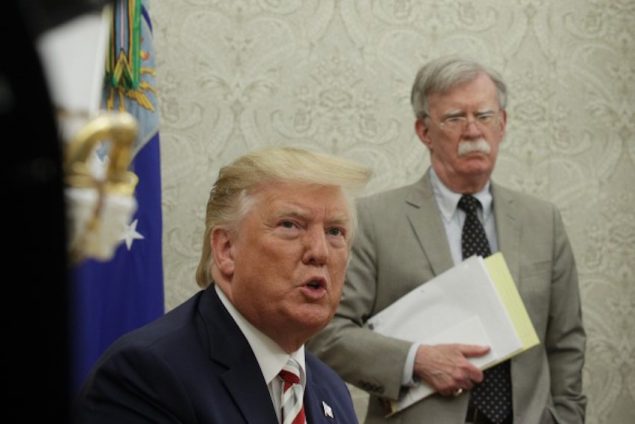 The humanitarian toll of U.S. sanctions is mounting, and Guaidó’s association with Trump has become his greatest liability.

Since January, the U.S. government has taken an aggressive strategy toward Venezuela – one driven by allusions to military intervention, an oil embargo and the decision to take the lead in formally recognizing National Assembly president Juan Guaidó as president, despite Nicolás Maduro’s control of the armed forces. New measures announced this month are even tougher: they include a freeze on all Venezuelan government assets in the U.S. and sanctions against U.S. individuals and entities that do business with the Maduro regime.

Yet the overall cost of President Donald Trump’s approach is proving to be far greater than initial calculations, with the U.S.’ strategy inflicting long-lasting damage to its reputation across Latin America. There are four reasons for this.

First, Trump’s unwillingness to rule out the use of military force in Venezuela – and U.S. policymakers’ frequent references to the Monroe Doctrine (the principle that guided the U.S.’ traumatic history of interventions in Latin America) – predictably stoked fear and was rejected by Latin American governments across the ideological spectrum, even by Colombia and Brazil, two U.S. stalwarts.

Remarkably, on that particular topic, Washington’s belligerent rhetoric forced even pro-Trump leaders like Brazil’s President Jair Bolsonaro to reluctantly side with Maduro in May, making clear that Brazil would not join U.S. military action in Venezuela. The big winner is China, which can successfully project itself as the antithesis to the United States – a safe and predictable partner to Latin American nations that talks investment and trade.

Second, Trump’s decision to wholeheartedly embrace Guaidó generated a sense of inevitability within the international community. Expecting the U.S. to do whatever it took to quickly oust Maduro, most governments in both Europe and Latin America followed Trump’s lead. Realizing that Trump overpromised, foreign ministries in several European capitals around the world are now in the awkward process of normalizing ties with the Maduro government again, a step many Latin American governments have resisted so far but will have to make at some point if Maduro stays on. For example, Germany’s ambassador, a former persona non grata, is now back in Caracas. The Spanish ambassador is in the unique situation of being in Venezuela despite still being officially considered a persona non grata by the Maduro government – which, in theory, leaves him without the rights of a foreign diplomat.

Even among Venezuelan opposition politicians, there is a growing perception that Trump sought to oust Maduro on the cheap – without developing a Plan B or a long-term strategy for post-Maduro reconstruction. The new sanctions could further stoke disillusion toward the U.S. among some Venezuelans.

During a recent visit to Caracas, several observers with ties to the opposition told me they thought the sanctions may be a largely electoral move to placate voters in Florida frustrated with Maduro’s continued hold on power.

“But we are paying the price,” a human rights activist opposed to Maduro told me. Indeed, more than one person working for leading opposition figures privately said they feared sanctions against Venezuela may remain in place for many years without leading to the ouster of the Maduro regime.

Just like the embargo against Cuba, “future U.S. governments would be unwilling to recognize the (sanctions’) futility, fearing the wrath of Cuban-Americans and Venezuelan-Americans in Florida,” one academic commented. If Cuba, which possesses no oil, survived decades of sanctions, it would be foolish to expect Maduro or a Maduro ally to quickly collapse in the face of U.S. sanctions, he suggested.

Third, the U.S. government’s pro-Guaidó rhetoric, including John Bolton and Mike Pence’s explicit calls for regime change, have perplexed regime opponents and made it easier for Maduro to depict the young challenger as a U.S. stooge, producing a rally-’round-the-flag effect that may have helped Maduro stay in power. While not a single cab driver or restaurant waiter I spoke to during my week in Caracas expressed support for Maduro, they were all quick to mention Guaidó’s dependence on the U.S., a notion the government has predictably exploited.

“After yesterday’s talks in Barbados we flew home to Caracas,” one of Maduro’s leading negotiators in the talks mediated by Norway told me with a grin. “Guaidó’s people probably had to fly to Washington to get new instructions.”

If Guaidó ever becomes president, the broad perception of his dependence on Washington would make it tremendously hard for him to govern and maintain a fluid dialogue with chavistas.

Fourth, U.S. economic sanctions have provided Maduro with a much-needed scapegoat, significantly deepening an already disastrous economic situation and aggravating the worst migration crisis in recent Latin American history. Eight million Venezuelans may leave by 2020. Paradoxically, that is good for Maduro: Most people who leave dislike the government, so the opposition will find it increasingly difficult to mobilize protests.

More importantly, those who have left also send a growing amount of remittances, thus helping to somewhat stabilize the economic situation. In addition, Russia predictably reacted to the new sanctions by further strengthening its economic influence in Venezuela. Neither Russia nor China will be deterred completely by the Trump administration’s latest move, and in addition to purchasing Venezuelan oil, China recently agreed to help repair Venezuela’s refining facilities, which could halt the overall decline in the country’s oil production.

Venezuela’s fate, all my interlocutors in Caracas implicitly agreed, depends on decisions made in Washington, Moscow, Beijing and Europe. Venezuela’s Latin American peers, by contrast, were conspicuously absent. The region has to deal with one of the world’s worst migration crises, but debates in Caracas rarely touch on what neighboring governments think or do vis-à-vis the crisis in Venezuela. Contrary to what U.S. policymakers politely reiterate, the Lima Group is largely seen as irrelevant by both Maduro and the opposition. Indeed, the most recent Lima Group meeting was little more than a stage for Bolton to announce additional U.S. sanctions on the Maduro regime – a move that, irrespective of whether it will lead to the ouster of the Venezuelan president, is accelerating the refugee outflow. With Colombia and Ecuador nearing the limit of their capacity to absorb Venezuelan migrants, there are signs that xenophobia and anti-immigrant rhetoric are increasing across Latin America – a situation that sanctions are bound to aggravate further.

Oliver Stuenkel is a contributing columnist for Americas Quarterly and teaches International Relations at the Getulio Vargas Foundation in São Paulo. He is the author of The BRICS and the Future of Global Order (2015) and Post-Western World: How Emerging Powers Are Remaking Global Order (2016).