Donetsk People’s Republic, Novorossiya, April 21, 2015–The statement by the Ukrainian Presidential administration today on the possible introduction of United Nations peacekeepers to Donbass indicates Kyiv’s unwillingness to carry out the Minsk-2 ceasefire agreements, the official representative of the Donetsk Peoples Republic to the Minsk-2 Contact Group says. 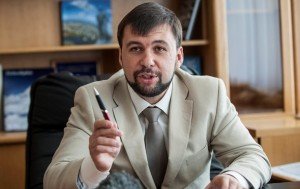 Denis Pushilin, also Vice-Speaker of the Donetsk People’s Council, said, “Unfortunately, Ukraine ceased to be a guarantor of the Minsk-2 pact by its active attempts to push at the United Nations their idea of deploying foreign peacekeepers in the Donbass. [Statement here by the office of Petro Poroshenko.]

“Poroshenko cannot be unaware that Article 10* of Minsk-2 requires the withdrawal of any and all foreign armed groups from the Donbass. Concerning international organisations, the agreement mentions only the Organization for Security and Cooperation in Europe, which is tasked with monitoring execution of the pact.”

“Once again, this proves that Ukraine is trying to derail the implementation of the Minsk agreement. Kyiv consistently alleges that the OSCE is unable to carry out the prescribed terms of the agreement,” Pushilin said.

“Once again, the DPR calls on the leaders of Germany and France, which together with Russian President Vladimir Putin were the guarantors of the package of measures, to prevent any further provocative moves on the part of Kyiv.”

“Chancellor Merkel and President Hollande have declared they would guarantee that Ukraine would carry out Minsk-2. Therefore, they now have to bring Poroshenko to heel, as by his actions he is ripping up the Minsk agreements,” Pushilin added.

Pushilin says that the initiative to deploy peacekeepers in Donbass, which Poroshenko reportedly discussed with UN Secretary General Ban Ki-moon, is unlikely to see implementation, as Kiev can’t rely on an international consensus that such a move is necessary.

Pushilin concluded, “I think there are UN member-countries that won’t agree with Poroshenko’s initiative.”

* Article 10 of the Minsk-2 ceasefire agreement:
10. Withdrawal of all foreign armed formations, military equipment, as well as mercenaries from the territory of Ukraine under monitoring of the OSCE. Disarmament of all illegal groups.