Foreign Minister Lavrov’s remarks at the meeting of the UN Security Council: May 7, 2021 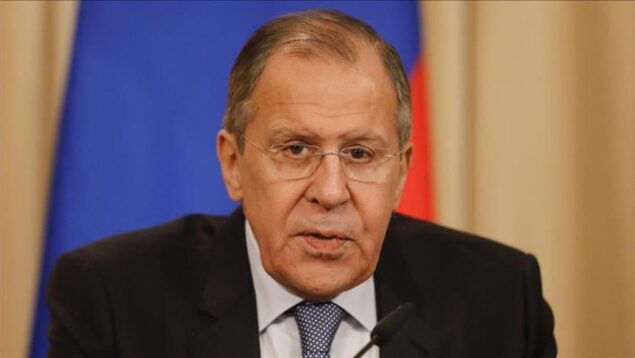 Significant remarks made by Russia’s Foreign Minister Sergey Lavrov last week that are similar to those made by the Chinese government (Xi Jinping and Wang Yi) and the statement by Yi and Lavrov following their meeting in Guilin.

First of all, let me thank Mr Wang Yi, State Councillor and Foreign Minister of the People’s Republic of China, for organising today’s debates. Maintaining multilateralism and the UN-centred international system is as topical as ever and demands the UN Security Council’s constant attention.

Today the world finds itself in a critical stage of development. The coronavirus pandemic has posed a grave challenge to everyone without exception. Normal life has been completely upended. It is difficult to predict the long-term or deferred consequences of the crisis, although we can see some positive trends thanks to the massive deployment of coronavirus vaccines.

The pandemic broke out in a world that was already far from perfect. In recent years, we have seen growing international tensions, as well as escalating regional conflicts and cross-border challenges and threats. The entire architecture of global governance created after the Second World War is being tested.

It is clear that the prospects of the international community’s sustainable and predictable development are directly connected with our ability to find effective solutions to common problems and our readiness to exercise collective leadership in order for true multilateralism to prevail.

Russia, like the majority of countries, is convinced that such work must be carried out solely on the basis of universally recognised norms of international law. The United Nations must serve as the key platform for coordinating efforts: it is the backbone of the modern global order, where all independent states are represented. Today, its unique legitimacy and unique capabilities are especially needed.

The core tenets of international law enshrined in the UN Charter have withstood the test of time. Russia calls on all states to unconditionally follow the purposes and principles of the Charter as they chart their foreign policies, respecting the sovereign equality of states, not interfering in their internal affairs, settling disputes by political and diplomatic means, and renouncing the threat or use of force. This is especially important at the current stage in the difficult process of forming an international multipolar system. At a time when new centres of economic growth, financial and political influence are gaining strength, it is necessary to preserve the internationally recognised legal basis for building a stable balance of interests that meets the new realities.

Unfortunately, not all of our partners are driven by the imperative to work in good faith to promote comprehensive multilateral cooperation. Realising that it is impossible to impose their unilateral or bloc priorities on other states within the framework of the UN, the leading Western countries have tried to reverse the process of forming a polycentric world and slow down the course of history.

Toward this end, the concept of the rules-based order is advanced as a substitute for international law. It should be noted that international law already is a body of rules, but rules agreed at universal platforms and reflecting consensus or broad agreement. The West’s goal is to oppose the collective efforts of all members of the world community with other rules developed in closed, non-inclusive formats, and then imposed on everyone else. We only see harm in such actions that bypass the UN and seek to usurp the only decision-making process that can claim global relevance.

The well-known idea to convene a Summit for Democracy proposed by the US Administration is in the same vein. The establishment of a new club based on interests, with a clearly ideological nature, has the potential to further inflame international tensions and deepen dividing lines in a world that needs a unifying agenda more than ever. Of course, the list of democracies to be invited to the summit will be determined by the United States.

Another initiative with the goal of global leadership that bypasses the UN is the French and German idea to create an Alliance for Multilateralism. What could be more natural then discussing the tasks of strengthening multilateralism at the UN? However, Berlin and Paris think differently and issue joint documents declaring that “the European Union is the cornerstone of the multilateral international system” and promote the conclusions of the Council of the European Union under the title “The central role of the European Union and European institutions in promoting multilateralism.” Presumptuous, you might say. The EU does not think so and declares its own exceptionalism despite all its invocations of equality and brotherhood.

By the way, as soon as we suggest discussing the current state of democracy not just within states but on the international stage with our Western colleagues, they lose interest in the conversation.

New ambitious initiatives to create narrow partnerships are emerging all the time within the Alliance for Multilateralism, on issues that are already being discussed at the UN or its specialised agencies, for example, on cyber security (with 65 member countries), respect for the international humanitarian law (43 member countries), the Information and Democracy Partnership (over 30 countries), etc.

This also reveals the West’s true attitude toward multilateralism and the UN, which they do not regard as a universal format for developing solutions acceptable to everyone, but in the context of their claims to superiority over everyone else, who must accept what is required of them.

Another example of the dictatorial methods introduced by the West is the practice of imposing unilateral sanctions without any international and legal grounds, with the sole purpose of punishing “undesirable regimes” or sidelining competitors. During the pandemic, such restrictions have limited the capacity of a whole range of developing countries to counter the spread of the infection. Despite UN Secretary-General Antonio Guterres’s call to suspend such unilateral sanctions during the pandemic, we mostly see them becoming harsher.

We believe such efforts to impose totalitarianism in global affairs to be unacceptable, yet we see it more and more from our Western colleagues, above all the United States, the European Union and other allies, who reject all principles of democracy and multilateralism on the global stage. As if to say, either it’s our way, or there will be repercussions.

It is striking that Western leaders, while openly undermining international law, do not hesitate to argue that the main task of world politics should be to counter the attempts of Russia and China to “change the rules-based order.” Such statements were made the other day following the G7 ministerial meeting in London. In other words, there has already been a substitution of concepts: the West is no longer concerned with the norms of international law and now requires everyone to follow its rules and observe its order. What’s more, US representatives freely admit that the USA and Great Britain have had the biggest hand in shaping these rules.

I am not saying all of this to ratchet up the confrontational rhetoric or advance an accusatory agenda. I am simply stating facts. But if we all support multilateralism in word, let us honestly search for ways to ensure that there is fairness in deed, without attempts to prove one’s superiority or infringe on another’s rights. I hope that this approach to maintaining multilateralism and the UN-centred system will guide the activities of the UN Secretary-General and his team.

I am convinced that the time has come to do away with medieval and colonial habits and recognise the reality of today’s interconnected and interdependent world. Honest and mutually respectful cooperation based on equal partnership between all states, guided by pragmatism and devoid of any ideology or politicisation, is what is needed now. It is the only way to improve the atmosphere in the world and ensure predictability in the advancement of the human race. That is especially true of such global challenges as the threat of terrorism and the proliferation of WMDs, climate change, new infectious diseases, and protecting human rights, starting with the most important one – the right to life.

I agree with US Secretary of State Antony Blinken who stressed recently that no country can overcome such global threats to the lives of our citizens alone, not even the United States.

The permanent members of the UN Security Council are called on to play a key role in fostering open and direct dialogue about the most pressing problems of our time. According to the UN Charter, they bear special responsibility for maintaining international peace and security. President of Russia Vladimir Putin proposed convening a summit with the leaders of the five permanent members. We hope to make this idea a reality once the epidemiological situation in the world stabilises.

In conclusion I would like to emphasise that the UN, as the main multilateral platform, must keep pace with changes on the global stage. The organisation must constantly adapt to ever-changing conditions, while continuing to fully respect the division of labour between the main UN Charter bodies and maintaining the support of all the member states. At every stage of change, our actions must be measured by the improvements made to the United Nations’ real-world effectiveness.

Russia stands ready to continue working constructively with all partners who share these approaches in order to bolster the authority and fully unlock the potential of the UN as the true centre of multilateralism.

Thank you for your attention.