Force and consent during a pandemic: the example of Poland 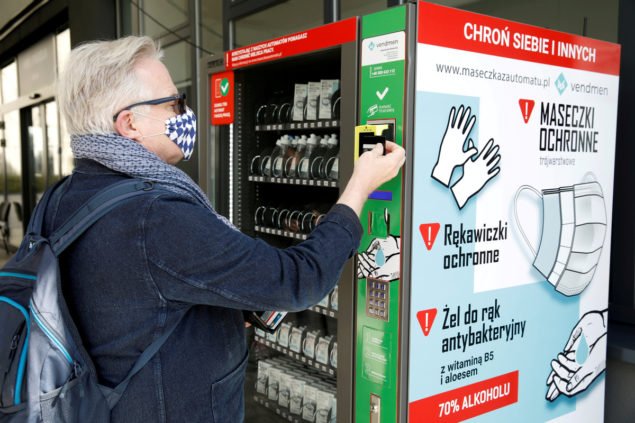 In this piece, written exclusively for New Cold War by Gavin Rae, a sociologist who lives in Poland, in which he examines the impact of the Covid-19 pandemic on the country and discusses the social, political and economic consequences of the approach that the government has chosen to adopt.

The total number of covid-19 deaths in Poland has recently crossed a thousand, with the imposition of an early and relatively strict lockdown meaning the country has so far avoided the worst effects of the pandemic. However, the government has now effectively ended the lockdown whilst the number of infections continues to rise; and the country currently has a higher number of active infections than Germany.

Although Poland still has the chance to avoid the grim path followed by many other European countries, two possible negative futures await us. Firstly, is that the premature opening of the economy leads to an increase in the number of those infected and killed by the virus. Alternatively, the country returns to a lockdown, but social frustrations and conflicts increase, as people struggle to survive in a country where social help for those who have lost their incomes is scarce. It is most probable that we will remain caught between these two options and in a partial lockdown that does not offer a solution to the combined health and economic crises that we face. To avoid these negative scenarios a new political and social consensus, to protect lives and living standards, will have to be constructed.

The challenges we face are not unique to Poland. Governments are having to make choices about whether to impose new harsher lockdowns, or open up their economies. Behind these decisions, lie questions of how social compliance can be maintained and whether governments will rule consensually or resort to using force.  For the left this creates a unique and difficult situation, as against all its instincts it must advocate people not working or physically interacting and accepting a temporary reduction in some civil rights and liberties.

Some have identified the immediate danger to our rights and freedoms, as coming via government introduced anti-contagion policies. It is argued that a dangerous system of social control is being introduced and that these new state powers and surveillance systems will be expanded once the pandemic has passed. The most extreme version of such thinking, states that the dangers of covid-19 are exaggerated or made up, in order for elites and governments to exert direct control over their populations.

There is undoubtedly a real danger that governments will attempt to use the present crisis to increase the repressive functions and powers of the state. Already in Poland, the government has tried to use the crisis to push through a dubiously democratic Presidential election and, even as the lockdown eases, have restricted the rights of people to demonstrate. However, capitalism has no interest in prolonging the current lockdowns nor suspending economic activity for any length of time. Quite the opposite in fact.

Following the first identification of the covid-19 virus in China, governments around the world had plenty of time to follow the advice of the international scientific community and impose lockdowns before the virus could spread in their countries. However, many governments prioritised the interests of business and profit over people’s lives and health, delaying introducing a lockdown with devastating results. This strategy has been vehemently pursued by the world’s most neo-liberal administrations, including in the USA, the UK and Brazil. It is no accident that the official death toll in these three countries already stands at around 165,000, with the actual figure certainly much higher.

Despite the success of the early lockdown in Poland, the government is bending to the pressures of business to restart economic activity as rapidly as possible. Businesses such as hairdressers, shopping centres, gyms and cafes have already partially opened. Recently, PM Mateusz Morawiecki, (without a mask and ignoring social distancing) went with his collegues to a local restaurant and urged his compatriots do the same. The government has even proposed giving millions of citizens vouchers worth 1,000 złoty, to be spent on holidays inside Poland this year, in order to boost the tourism industry. This could potentially result in the virus being spread around the country and would endanger those areas (such as the Mazury lake district) where there are currently virtually no cases of covid-19.

As in many other countries, the authoritative legitimacy of the Polish government is weakening and the population is confusedly caught between a fear of the virus spreading further and the difficulties of surviving without incomes, alongside the harsh social and psychological costs of isolation. Within a capitalist economy, the vast majority of society is subsumed into a generalised system of commodity production and consumption. Yet we now live in extraordinary times and in order to protect ourselves from the first wave of this pandemic, huge swathes of the population have had to exit the workforce and thus cease to produce value for the owners of capital. In order to protect the health and lives of ourselves and loved ones we have to act, at least for now, beyond capitalism.

New economic measures need to be introduced, including compensating all non-essential workers fully and providing them with the means to survive without going to work. This is particularly urgent in Poland where unemployment benefit is extremely low and only around 16 percent of the unemployed are eligible to receive it. Rents and mortgages need to be suspended for those who are unable to pay them. The production and distribution of necessary products (food, medical supplies, energy, etc.) must at least partially be organised by the state. Those essential workers that produce a real use value (e.g. in health, security, shops, postal/delivery services and transport)  have to be protected and properly rewarded for their service. Poland currently has one of the highest number oftemporary and self-employed workers in the European Union, meaning that many of its essential workers have little or no protection.

Unfortunately, such policies have not been introduced in Poland nor in most other European or American countries. The protective arm of the state is failing to shelter its populations, meaning that its more repressive side is coming to the fore. However, the biggest threat to our liberties and freedoms at the moment is not that the state will make us stay at home and not work, but that people are being forced back into work before it is safe – like canaries in a cage being taken down a mine.

We are currently entering this new phase of the covid-19 crisis in Poland. The lack of any significant social support, for those that have been deprived of an income, means that frustration and desperation is growing in society. This is combined with the paradoxical fact that the initial success of the lockdown, in reducing the number of causalities, has allowed the false idea to spread that covid-19 is not a real threat to the population’s health and that the ‘cure is more deadly than the disease’.

In recent weeks there have been a number of demonstrations held in Warsaw, organised by ‘entrepreneurs’. They have chanted slogans such as ‘take off your masks’ and ‘covid-19 is not real.’ Sharing a belief in conspiracy theories, that blame an unidentified elite for the virus, some leaders of the far-right have joined their actions. An angry petit-bourgeoisie, that is seeing its livelihood collapse, has found common cause with big capital in demanding an opening of the economy. That this would cause the deaths of thousands of workers and their families (and disproportionately affect the weak and vulnerable) is of little concern to those who for years have been fed a social Darwinian diet of individualism and competition.

These ‘entrepreneurs’ claim that they are the real wealth creators and that the government should stop restricting their activities, reduce their taxes and provide them with further financial support. This despite the fact that business owners are about the only social group to have been given any significant government help since the outbreak of covid-19 in Poland. Also, the financial help offered to businesses, has been introduced alongside new regulations that allow businesses to increase the exploitation of their workers through such things as cutting salaries, laying off workers, forcing people to take their holiday leave, etc.

Meanwhile, it is workers who are amongst the worst affected by the covid-19 virus in Poland. Currently, around 1/3 of all covid-19 cases are concentrated in the industrial region of Silesia, which makes up around one-twelfth of the country’s population. This has partly been caused by the very high infection rate amongst miners, who were left unprotected whilst working in the mines, in conditions where it is impossible to socially distance. The Polish government did not protect these workplaces from infection and high social density in the mining communities has helped the virus to spread.

Another such recent example has been a furniture factory in the region of Wielkopolska, where 150 workers have so far been found to have been infected. It has been reported that workers from the factory were threatened with being fired or having their salaries reduced when they asked about coronavirus tests; and that those on sick leave with the virus were forbidden from talking about it. Therefore, whilst social distancing has been practiced throughout Poland, and most shops and services were closed, large numbers of workers in industries, factories and warehouses have been compelled to keep working. As elsewhere in the world, a common feature of this pandemic, is that a disproportionately high number of those being infected are workers employed in unsafe conditions.

Poland presently finds itself in a contradictory situation whereby its early lockdown has saved tens of thousands of lives but its early easing is threatening a new rise and spread of the virus. Two right-wing forces are competing in the country, with the government using some of the opportunities provided by the pandemic to increase the authoritarian and anti-democratic course that it had already embarked upon. Meanwhile, a libertarian right-wing movement is pushing the government to put economic interests before health and lives and open up the Polish economy as quickly and widely as possible.

If new and increased lockdowns are necessary, then some individual freedoms will have to be temporarily suspended. However, there is no greater human right than a person’s health or life, and it is these that governments have to protect first. A new social and political consensus is needed in order to continue the lockdowns (and as needed programmes of isolation and testing and tracing) for as long as is necessary to suppress the virus. Such a consensus would have to be based upon meeting people’s immediate material needs and therefore allowing millions of people to temporarily not work.