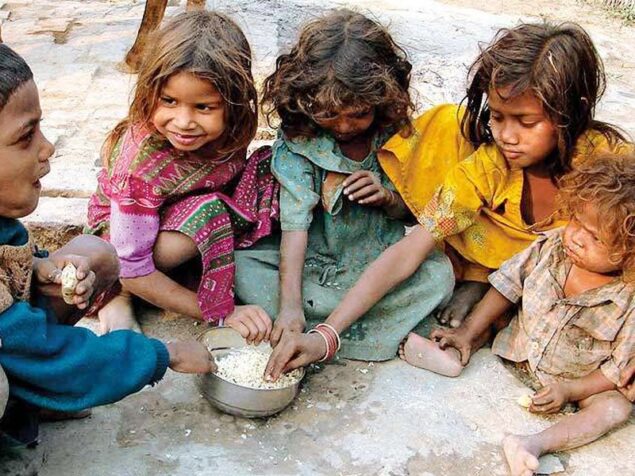 The Modi government’s attempt to “explain” away India’s slipping from being 94th on the world hunger index in 2020 to 101st in 2021, a rank well below that of neighbours Pakistan, Nepal or Bangladesh, by questioning the “methodology” of the index, is jejune enough; but even more shocking is its total inability to see the reason behind the acute hunger in the country.

The Modi government’s attempt to “explain” away India’s slipping from being 94th on the world hunger index in 2020 to 101st in 2021, a rank well below that of neighbours Pakistan, Nepal or Bangladesh, by questioning the “methodology” of the index, is jejune enough; but even more shocking is its total inability to see the reason behind the acute hunger in the country.

Precisely when India has been slipping on the hunger index, the country has had more foodgrain stocks than are required by it according to official “norms”; in fact on September 1, 2021, the FCI had 50.2 million tonnes of foodgrain stocks against the required “norm” of 26.2 million tonnes. The obvious conclusion to draw from this fact is that it is the lack of purchasing power in the hands of the people that restricts their ability to buy food in adequate quantities and explains their acute hunger; but the conclusion that the government draws from it is that people cannot possibly be hungry if there are surplus food stocks, and hence the hunger index must be lying.

A surplus of foodgrain stocks is “surplus” only with respect to a given level of prices and of purchasing power (in money terms) in the hands of the people; people may well be starving despite the existence of such a “surplus”, the solution for which would be either a lowering of prices or an augmentation of purchasing power in people’s hands. In fact numerous economists and civil society organisations, not to mention political parties even outside of the Left, have been urging the government to augment purchasing power by making transfers into the hands of the people, and to finance such transfers even through an increase in the fiscal deficit if necessary; such action cannot possibly exacerbate inflation in a situation of “surplus” foodgrain stocks and of pervasive existence of unutilised industrial capacity. On the contrary, since the inflation currently occurring in the economy is basically because of the government’s attempt to raise revenue through indirect tax hikes and not because of any excess demand, it would be reduced rather than increased by enlarging the fiscal deficit androlling back indirect tax hikes.

But like a naive schoolboy obediently following his headmaster’s instructions, the Modi government is determined to please international finance capital by keeping the fiscal deficit down to levels the latter finds “acceptable”, and hence avoids any transfers to people. As a result of the meagre purchasing power in people’s hands, we have the combination of three seemingly incompatible phenomena: acute hunger, surplus foodgrain stocks, and yet rampant inflation. And the combination appears so impossible to an uncomprehending government that it cannot even accept the possibility of its occurrence; hence it just denies the existence of acute hunger. Behind this denial is not just the typical BJP make-believe (“there cannot possibly be acute hunger if the Great Saviour is at the helm”); there is in addition in a very real sense a total lack of comprehension of simple economics.

In fact, not recognising the prevalence of hunger, the government is making all sorts of efforts to reduce excess foodgrain stocks which have persisted all these years despite large-scale exports. And the latest of these efforts is to encourage bio-fuels production. All over the world there is a tendency to substitute fossil fuels by ethanol which is supposed to be “cleaner”, and a larger proportion of grains is being diverted for ethanol production than before. In the US, maize is being used for ethanol production; but this matters little for the US since it does not have to worry about mass hunger and does not figure in the world hunger index. But the Modi government, not to be outdone, has also announced an ambitious plan for shifting to ethanol: it would be promoting a mix of gasoline and ethanol with the proportion of the latter being 20 per cent, and for this purpose using rice and sugarcane.

A senior government official is quoted as saying that this would pose no problems for India’s food security, since “the government has enough stockpiles of grains at warehouses of the State-run Food Corporation of India”. The official’s remark betrays the same ignorance of basic economics as most other statements of the government. Excess stocks of foodgrains, instead of being seen as the outcome of the prices in the market and the state of purchasing power of the people, are adduced as proof of plenitude. By this reasoning even if there is a famine in the country, that fact would not be acknowledged at all as long as there are plenty of foodgrain stocks in FCI godowns.

It is not just the diversion of grains for ethanol production that must be opposed by all right-thinking persons in the country. The available grains should instead be getting distributed among the people by putting purchasing power in their hands so that their hunger is allayed. But even the use of sugarcane for ethanol production, insofar as it leads to a diversion of land away from foodgrains, will lead to a still greater decline in per capita foodgrain availability than has been the case till now.

The reason is simple. Whenever there is a fall in foodgrain stocks below the “norm”, there is a fear of inflation. Hence, finance capital, worried about the loss through inflation of the real value of financial assets, immediately puts pressure on the government to counter such inflation by cutting back its spending and by inducing the imposition of a tight monetary policy. But no such countervailing efforts are made in the opposite case, when foodgrain stocks are excessive. Falls in foodstock levels in short are quickly eliminated but not excesses in foodstock levels; and because of this asymmetry there is always, in general, a state of “surplus” foodstocks.

Alongside this asymmetry there is a second asymmetry. There are two ways to eliminate any shortfall in foodgrain stocks below the accepted “norms”. One is through an increase in production and hence supplies, and the other through a reduction in demand, such as through cuts in public spending and a tighter monetary policy (which basically reduce purchasing power with the people). Of the two, the much easier way for the government is the latter, both because it takes less time to show its effects, and also because when public spending is being cut, the required government investments, for increasing foodgrain output, would scarcely be forthcoming. Hence the tendency over time is for the purchasing power with the people to keep getting restricted while per capita foodgrain output, and hence per capita foodgrain availability, keeps falling, which means an increase in the magnitude of hunger. This is exactly what has been happening in India.

Thus surplus stocks will exist even with a secular decline in per capita output and per capita availability of foodgrain and a secular increase in hunger. Not only does the existence of surplus stocks not indicate the absence of hunger, but the typical tendency in a neo-liberal economy is to have surplus stocks along with growing hunger. This tendency will only be exacerbated by the diversion of foodgrains or of sugarcane (towards which foodgrain land will be diverted) for ethanol production, in fact not just exacerbated but absolutely ensured.

The Modi government’s decision to increase the diversion of grains and sugarcane for ethanol production therefore is certain to reduce per capita grain availability and to increase the magnitude of hunger. This is because at the first sign of stocks falling below the “norm” there will be a squeeze on the purchasing power with the people, thus “resolving” the problem of shortage (as manifested in the fact of stocks falling below the “norm”) through a further increase in the magnitude of hunger.

This has serious general implications. There is much enthusiasm in the West among progressive circles for “green energy” within which biofuels are included; and for increased production of biofuels a diversion of grain output is recommended. No matter what the relevance of this prescription in the context of advanced countries, its replication in third countries like India will have disastrous consequences for the magnitude of hunger. 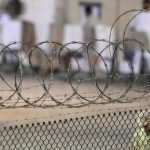 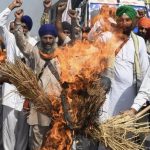