Note by New Cold War.org: In the following article, the writer overlooks the multi-faceted political repression that has descended upon Ukraine since February 2014, including the formal banning of political parties such as the large Communist Party of Ukraine. This means that anti-democratic elections in present-day Ukraine can hardly be used as an accurate measure of opinion in the country. Notwithstanding this oversight, the following article provides valuable insight.

There were a range of other factors that helped determine who would come to the fore of Ukraine’s oligarch-dominated political system including language, religion, and class. Region was related to these differences, but was not a perfect proxy for them. Nonetheless, despite the existence of numerous other cleavages, the map of the past several presidential elections reflected a blatantly obvious division between the North and the West and the South and the East. 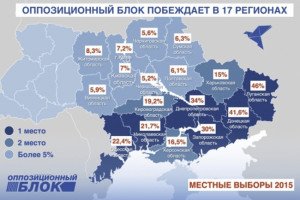 Percentage of vote won by Opposition Bloc in Oct 25, 2015 municipal election in Ukraine

Since Maidan, and particularly since the start of Russia’s “hybrid war” in Donetsk and Lugansk oblasts, many Western observers have convinced themselves that these regional divisions had melted away. Sagacious proclamations that “Ukraine is united in its European choice” were regularly splashed across the editorial pages of major newspapers like the New York Times and the Wall Street Journal. Ukrainian politicians also got in on the act, solemnly intoning that, whatever might have been the case in the past, the old dividing lines were no longer relevant to a united, pro-European Ukraine. I experienced this firsthand earlier this fall in Kiev at the Yalta European Strategy conference. One of the speakers, a famous Ukrainian writer, even went so far as to declare that the idea of a Ukraine divided along regional lines was “hateful propaganda,” “malicious nonsense,” and a “disgusting Russian attempt to paint Ukraine as a false country.”

Now, simply as a matter of fact, all manner of countries have deep, regional political divisions. It’s actually a surprisingly banal phenomenon. Whether it is urban-rural, north-south, or east-west it’s incredibly common to find various kinds of social, economic, or political “cleavages” that are primarily drawn along regional lines. A cursory glance at any of the past 4 or 5 presidential elections in the United States shows an incredibly sharp and worsening regional divide (a divide that, in one form or another, stretches back for virtually the entirety of American history). Indeed this divide manifests itself in almost everything, even health insurance. There is an entire genre of pop sociology whose only goal is to compare the multitudinous differences of “red” versus “blue” America, for example David Brooks’ famous (if somewhat overrated) Bobos in Paradise.

Similarly, Italy’s stark regional contrasts (the north of the country is, on average, about as wealthy as the Netherlands, while the south is poorer than Portugal) have been exhaustively documented in the realms of political science, economics, and history. Even Poland, among the most ethnically homogenous and politically centralized countries in all of Europe, has political divisions that can, in part, be traced along the now vanished border between the German and Russian empires.

No one in their right mind, of course, would claim that a writer who tried to analyze the economic, social, and political differences between New York and Texas was somehow engaged in “anti-American propaganda,” or an attempt to prove that the United States is a “fictitious nation.” But when it comes to Ukraine, the current government and its supporters are rabid in attacking anyone who points out that Ukraine is not united in its desire to fulsomely embrace the European Union.

This isn’t my own weird, personal opinion, it’s simply, objective reality. Look at the map [pictured] which shows the percentage of the vote won by the Opposition Bloc, a successor to Yanukovych’s late (and not much lamented) Party of Regions. It would be wrong to simply call the party “pro-Russia” (it’s financed by Ukrainian oligarchs who have every interest in maintaining their country’s independence from Moscow) but it is, broadly speaking, fair to say that the Opposition Bloc is not in favor of the process of European integration that sparked the Maidan revolt.

Perhaps there is a way to look at that map and not see a sharp regional divide but I’m not sure what kind of mental gymnastics it would require.

None of this means that Ukraine is any less genuine or “real” of a state. As noted previously, regional divisions within countries are incredibly common and, in fact, totally unremarkable. But pretending that Ukrainian public opinion is united, much less formulating public policy on that basis, is a mistake because…well because it is simply not true.

Maybe at some point in the future Ukraine’s populace will be united behind a particular political party or set of ideals. There is strong evidence that Soviet nostalgia and anti-EU opinions are overwhelmingly concentrated in the older generations, and so, over time, you would expect these views to gradually wither away. But at the moment, Ukrainians absolutely do not agree on what the country ought to do or where it ought to head and we shouldn’t pretend that they do.