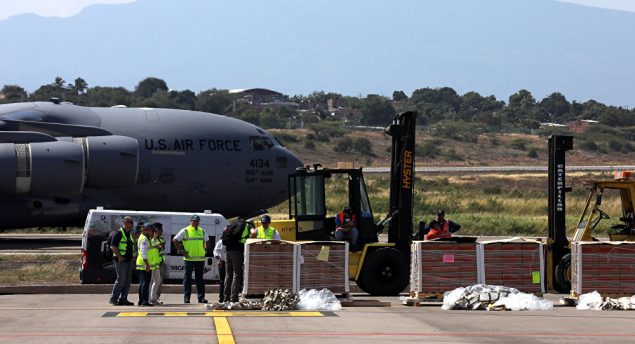 There is increasing concern that the US and its allies is cynically trying to stage-manage a confrontation to provide a false excuse for a US military attack on Venezuela – under the pretense of delivering so-called ‘humanitarian aid’ .

In Trump’s latest speech on Venezuela on Monday 18 February he warned the Venezuelan military that they would “lose everything” if they continued to remain loyal to Venezuela’s constitution and to Venezuela’s democratically elected President, Nicolas Maduro. Alongside this explicit agitation for an internal military coup, the US administration continues to exert pressure on Venezuela through harsh economic sanctions and threats of direct US military intervention. There are mounting fears that under the guise of delivering ‘humanitarian aid’ the US is trying to stage-manage a confrontation to provide a pretext for a US military attack on Venezuela.

In an act of brazen cynicism the US is offering the Venezuelan people, who it is currently attempting to starve through economic sanctions, ‘humanitarian aid.’ The Venezuelan government has rejected this ‘aid’ on the grounds that it is not a genuine offer to help but on the contrary a part of the US plan to achieve “regime change” in Venezuela, in contravention of international law.

The US military has been transporting ‘aid’ to Columbia, in an area near to the border with Venezuela. Juan Guadio, the US-backed right wing leader of Venezuela’s opposition, has designated Saturday 23 February 2019 as a day on which there will be an attempt to bring the US ‘aid’ into Venezuela.

Here are 5 reasons to be totally suspicious of the US offer of ‘aid’ to Venezuela that you will not hear in the Western mainstream media:

1. If the US cared about the welfare of the Venezuelan people they would lift the economic sanctions

The US has pledge $20 million worth of ‘aid’ to Venezuela. This sum is completely insignificant in comparison to the billions of dollars’ worth of damage the US on-going economic sanctions have caused to the Venezuelan economy in recent years.

In January 2019 the US administration announced new sanctions which effectively amount to a US oil embargo on Venezuela. These new US sanctions are expected to be active from April and are projected to cost Venezuela $30 million per day – so the offer of $20 million in ‘aid’ will not even make up for the damage caused by one day of the new oil sanctions. US National Security Advisor John Bolton estimates that these sanctions will cost the Venezuelan economy $11 billion in lost exports in 2019 alone. The US also seized $7 billion of assets from Venezuela’s oil company last month.

The impact of US sanctions to date has been to impoverish the Venezuelan people, including by creating shortages of food and medicines. A former United Nations Special Rapporteur, Alfred de Zayas, described the US sanctions as “economic warfare” and “crimes against humanity.”

2. The leading international humanitarian organisations have warned against US “politicised” aid

The International Red Cross and United Nations agencies have refused to collaborate with the US in delivering ‘humanitarian aid’ because it does not fulfil the criteria of being “neutral” but is part of a wider political strategy to oust Venezuela’s government.

A UN spokesman, Stephane Dujarric said, “Humanitarian action needs to be independent of political, military or any other objectives. The needs of the people should lead in terms of when and how humanitarian assistance is used.”

3. There is a US military build-up around Venezuela

Donald Trump has repeatedly asserted that military intervention to overthrow the Venezuelan government is an “option on the table.” Such action would cause enormous humanitarian suffering.

On Wednesday 13 February 2019 the Cuban government warned the world that the US was covertly increasing its military operations around Venezuela. In a “Declaration of the Revolutionary Government” Cuba stated:

“Between February 6 and 10 of 2019, several military transport aircraft have been flying to the Rafael Miranda Airport in Puerto Rico; the San Isidro Air Base in the Dominican Republic and other Caribbean Islands that have a strategic location, most certainly without the knowledge of the governments of those nations. These flights took off from US military facilities from where Special Operation Troops and US Marine Corps units operate. These units have been used for covert operations, even against leaders of other countries.”

This indicates that the US is making preparations to deploy military force in its efforts to remove the Venezuelan government.

The US intervention in Venezuela has nothing to do with helping the Venezuelan people; on the contrary it is about asserting US interests in the region and getting control over Venezuela’s oil.

US National Security Advisor John Bolton was rather explicit in why overthrowing the Venezuelan government is in the interests of the US. He said:

“We are in conversation with major American companies now that are either in Venezuela or in the case of Citgo here in the United States. I think we are trying to get to the same end result here. Venezuela is one of the three countries – I call it the troika of tyranny. It’ll make a big difference to the United States economically if we could have American oil companies really invest in and produce the oil capabilities in Venezuela. It would be good for the people of Venezuela, it would be good for the people of the United States. We both have a lot at stake here making this come out the right way.”

5. The record of US ‘humanitarian intervention’ in the Middle East has been a disaster

The US purported that the wars on Iraq, Afghanistan, Libya and Syria were in the name of “democracy”, “human rights” and “freedom.” In reality these wars amounted to crimes against humanity, slaughtering over a million people and injuring and displacing millions more.

The US offer to help the Venezuelan people through delivering ‘aid’ is entirely fake and cynical. There are serious concerns that the delivery of this ‘humanitarian aid’ is being used as cover through which the US intends to fabricate a “humanitarian” pretext to launch military aggression against Venezuela.