By the Ukrainian Committee for Human Rights, Aug 14, 2014

During the night of 20 to 21 February 2014, activists of Euromaidan stopped buses near the town of Korsun-Schewtschenkowskiy (Cherkasy oblast) in which several hundred opponents of Euromaidan were returning from Kiev to Crimea. The armed men took over the buses and burned them. The approximately 350 passengers, including women and young people, endured harassment and in some cases cruel beatings. Many passengers were murdered.

The film ‘The crimes of the Nazis by the Ukrainian Euromaidan: The pogrom of Korsun’ (24 minutes, weblink here or click on screen below) documents this crime in which several dozen people were killed. The documentary was made by the Ukrainian human rights organization Information Group on Crimes Against the Person.

A report on Fort Russ on the occasion of the one-year anniversary of the attack at Korsun is here. 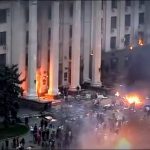