Dozens of activists protested outside the White House on Valentine’s Day, February 14, calling for an end to what they call America’s “endless wars.” 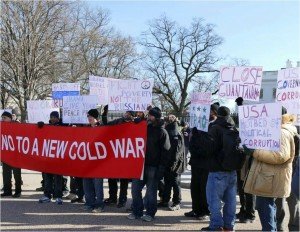 Protesters particularly focused on US interventions in the Middle East as well as an escalation of animosity between the U.S. and Russia.

Standing just feet away from the White House gate, they held signs that differed in their specific criticism but all came to the same point, as one sign put it: “NO to U.S. intervention abroad!” Others: “Hands off Syria!” “Close Guantanamo!” “Build schools, not bombs!” “Fight poverty, not the Russians!” “NO to a new Cold War!” and “Obama: Give your Peace Prize back!”

President Obama rode into office on a wave of anti-Bush discontent with heavy fingers pointed at his use of distortion to lead the nation into war with Iraq which ended in more than $2 trillion dollars in debt with little to show for it except a nation now mired in war with ISIS and suffering political factionalism. However, the US continues to find itself stuck in the Middle East while now increasingly engaged in Syria. Added to that: a budding new Cold War with Russia.

Foreign policy has become a recent topic of debate in the 2016 election with Democrats and Republicans vying over who would make the best commander-in-chief of the nation. On the Republican side the argument teeters between Ted Cruz’s call to “carpet bomb” ISIS and Donald Trump’s proposal to “let Putin knock the hell out of ISIS.”

Even on the Democratic side, the foreign policy question has become a debate of how deep the US should be engaged in other parts of the world between Hillary Clinton who, as senator, voted for the war with Iraq in 2003, and Senator Bernie Sanders who voted against it. In the last debate, Sanders took Clinton to task for her foreign policy positions only falling just short of calling her a “war hawk.” In particularly, Sanders suggested that Clinton may be too close to former Secretary of State Henry Kissinger, the architect of the secret bombing campaign of Cambodia during the Vietnam War, a proponent of the Iraq War and an interventionist some, such as Christopher Hitches, have dubbed a ‘war criminal.”
“Kissinger is a friend, and I relied on his counsel when I served as secretary of state,” Clinton wrote in her memoir. “He checked in with me regularly, sharing astute observations about foreign leaders and sending me written reports on his travels.”

In the debate, Sanders argued that it was “where the secretary and I have a very profound difference.”

“In her book and in this last debate, she talked about getting the approval or the support or the mentoring of Henry Kissinger,” he said. “Now, I find it rather amazing, because I happen to believe that Henry Kissinger was one of the most destructive secretaries of state in the modern history of this country.”

What the electorate will decide this year is yet to be seen but, according to journalist, radio show host and civil rights activist Jamila Bey, the US can make better use of its resources than funding the endless war machine.

“America’s might has never been due to military strength,” Bey told The Spectacle. “The might of this nation has come from its willingness to learn, to grow and to fall back on its principals of diplomacy and morality. We are in danger of straying from that history. It’s up to the American voter to remember and to return the country to its rightful path.” 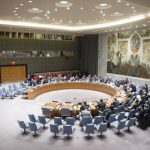 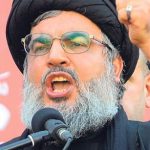