The final text of the peace agreement will now be put to a popular vote on October 2.

In a landmark moment in Colombia’s history, the peace delegations of the government of President Juan Manuel Santos and the country’s Revolutionary Armed Forces of Colombia gathered Wednesday evening to announce the end of negotiations and a final peace accord in Havana, Cuba, after nearly four years of negotiations between the two sides of the conflict. 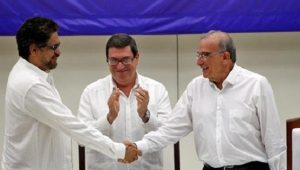 The parties have spent the last several days reviewing the final text, which will be put to a popular vote on October 2.

“Now the battle of ideas can start,” the FARC-EP’s representative Ivan Marquez said, adding that the final deal marks a new chapter in Colombia’s history. “The peace deal is a point of departure—not of closure—toward the social transformations demanded by the masses.”

Government representative Humberto de la Calle said, “I am certain now that this is the best agreement possible. But the Colombians will judge.”

President Santos insisted that the text of the final agreement was “definitive,” and could not be modified. “From the beginning, one principle ruled the negotiations: nothing is agreed until everything is agreed. Today, at last we can say that everything has been agreed,” he added.

The final deal will mark the end of 52 years of armed internal conflict between government forces and the FARC-EP, founded in 1964 based on Marxist ideals of agrarian reform, rights for rural communities and social justice. The conflict is the longest-running civil war in Latin America.

Cuban peace guarantor Rodolfo Benitez explained, “Peace is guaranteed as a right of Colombian citizens in their nation’s constitution, something that has eluded the South American nation for the last five decades.

“The sum of the partial agreements reached so far are contributing to compliance with the rights and duties guaranteed by the Constitution,” said Benitez, “including the fundamental rights of campesinos, Afro-Colombians and Indigenous communities.

“The final deal,” he continued, “means to address the root causes of the conflict: land, property, exclusion of campesinos, affecting especially women and children.”

Dag Nylander, Norway’s peace guarantor added, “We don’t want one more victim in Colombia. A new chapter of Colombia’s history is opened,” with the final deal allowing for “more social inclusion, especially of those who have been excluded and historically more affected by the conflict.”

The final agreement announced Wednesday calls for meaningful agrarian reform to address inequality in poor, rural areas. It calls for new political forces to address the issues that initially led the FARC-EP to take up arms, and also guarantees the safety of the rebels after they put down those arms to participate in politics.

The agreement calls for protection of human rights activists and labor organizers who have been targeted by right-wing paramilitaries; alternatives to illicit drug production; reparations for victims of violence on all sides; and a commission made up of the Colombian state, the FARC-EP, alongside the United Nations to monitor the accord’s implementation.

The announcement brought an end to nearly four years of negotiations in Havana, launched in 2012. FARC-EP leaders will now take the agreement back to its camps to share the information with its ranks, which could be the last such FARC-EP conference with armed rebels before the group transitions into a non-military political movement in accordance with the peace deal.

The vote on the final peace agreement is expected to take place on Oct. 2 and electoral authorities will determine whether public funds will finance the campaigns in favor and against the peace deal. In order to pass, a majority of 4.5 million Colombian voters—a 13 percent participation threshold—need to vote “Yes” in the plebiscite.

Far-right former president and current Senator Alvaro Uribe, whose presidency saw record levels of paramilitary activity, human rights violations and displacements, has been pushing for a “No” vote.

According to a recent Gallup poll, of the half of the population that had made up its mind on how they would vote; 67.5 per cent were ready to vote in favor of ratifying the final peace deal, while 32.5 per cent said they would vote against it.

The FARC-EP has said that the putting down of arms is the beginning of peace and a process of reconciliation to unite “two Colombias,” of which it represents the marginalized groups that have suffered most under the armed conflict.

Colombia’s over five-decade civil war has killed over 220,000 victims and uprooted some 6.3 million people, making it home to the second largest population of internally displaced peoples in the world after Syria.

After today’s historic announcements that negotiations have concluded in the Colombian peace process, here are the five key points that have been agreed on.

End of violence  A bilateral cease-fire has been signed, which agreed that FARC guerrillas will hand in all weapons to the United Nations.

The protection of victims’ rights  There have been over 220,000 victims in Colombia’s five-decade-long conflict, and over 6 million internally displaced. According to the agreement, a Peace Tribunal will be set up to ensure their right to justice, truth, and to ensure that the war is never repeated. This point is what has been referred to as transitional justice. According to Colombian President Juan Manuel Santos, “there will be no impunity.”

Land restitution  Violence has been rife in the Colombian countryside. This point sets up a fund for land to be distributed to those displaced by the conflict.

Reintegration of FARC  For peace to be sustainable, armed members of the FARC will be reintegrated into society and their organization will become a political movement which will participate in 2018 elections. Before then, non-voting representatives will be immediately incorporated into Colombia’s House of Representatives.

Combating narco-trafficking Both the government and the FARC have agreed to cooperate in efforts to eradicate drug trafficking, which has played a role in fueling the conflict.