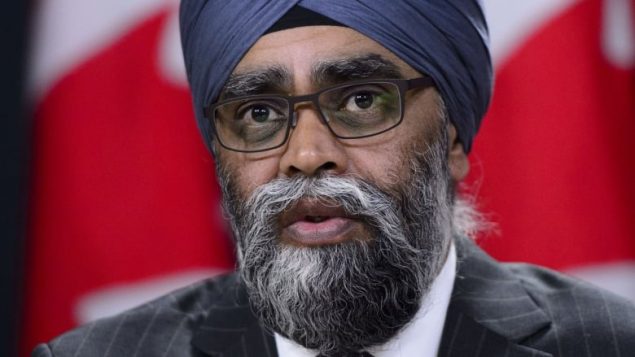 Minister of National Defence Harjit Sajjan told Power & Politics that it is “far too premature” to discuss military intervention in the political crisis gripping Venezuela. (THE CANADIAN PRESS)

Although Canada still tries to paint itself as a force of liberalism in world politics, as this article shows the Canadian government has been at the forefront of pushing the Lima group towards Trump’s preferred option of military intervention – to the extent that it suffered an embarrassing defeat on the issue at the hands of Lima group members, who have drawn back from military intervention. Embarrassed by this setback, Canadian Defence Minister Harjit Sajjan puts on a brave face by portraying Canada as a force of restraint; while in fact – as this article shows – it’s the opposite.

“I think it’s far too premature to have any discussion regarding any type of military actions. We need to allow the diplomatic space and the experts to be able to move forward,” said Sajjan in an interview Friday on CBC News Network’s Power & Politics.

United States President Donald Trump has said that “all options are on the table” when he’s been asked whether his country might send its military to Venezuela. On Friday, U.S. Vice-President Mike Pence told a crowd in Florida that the time had come to end the regime of socialist leader Nicolas Maduro: “This is no time for dialogue. This is time for action.”

Canada and the U.S. are among a long list of countries that have recognized Venezuela’s opposition leader Juan Guaido as the country’s interim president in the wake of massive street protests against Maduro, who was returned to power last year in an election widely seen as marred by vote-buying and widespread electoral fraud.

On February 4, Canada will host members of the Lima group of South and Central American countries to discuss possible solutions to the turmoil in Venezuela.

In an interview withPower & Politics host Vassy Kapelos, Sajjan said diplomatic solutions should be the focus for the time being.

“I think there is a lot of work that needs to be done when it comes to making sure that there is a peaceful transition in government and I think those avenues need to be explored and pushed because I think military intervention is far too premature,” he said.

"It's far too premature to have any discussion regarding any type of military actions," says @HarjitSajjan when asked if Canada would consider military intervention in Venezuela. He says avenues for a peaceful transition need to be explored and pushed #cdnpoli pic.twitter.com/qd4jkqGYe4

Sajjan was in Washington Friday to meet with his U.S. counterpart, acting Defense Secretary Pat Shanahan, but he said the two did not discuss the situation in Venezuela.

“We have opportunities on a number of occasions to discuss this and our position has been very clear on Venezuela and in the leadership role that Canada has been taking on this,” he said.

Eric Farnsworth, vice president of the Council of the Americas, said in an interview with Power & Politics that he thinks U.S. military intervention is “very unlikely” at this stage.

“I can tell you with certainty that people, at least in Washington, are looking for virtually every tool that they can employ to try to change behaviour in Caracas without resorting to the use of force,” said Farnsworth.

"People, at least in Washington, are looking for virtually every tool that they can employ to try to change behavior in Caracas without resorting to the use of force," says @ericfarns. pic.twitter.com/YlbBA5YTqt

Farnsworth said part of that reticence to use force stems from the complicated history of U.S. military intervention in the region — and from the fact that no one knows what would follow a military strike.

“I mean, you can decapitate the regime. You can take out the leadership. But Venezuela is a huge country of over 30 million people. It’s very diverse geographically. It has a lot of difference,” said Farnsworth. “It’s not a quick and easy, in-and-out sort of thing.”

Watch: The Power Panel digs into Canada’s role in resolving the ongoing political crisis in Venezuela