A mass nationalist protest near the Ukrainian parliament in Kiev has turned violent, with 15 policemen wounded and at least 50 rioters arrested. Radicals are demanding “war veteran” status for armed nationalist rebels who fought for the Nazis in WWII.

On Tuesday afternoon, an estimated 8,000 far-right activists gathered at the Ukrainian Parliament (Verkhovna Rada) as MPs considered a bill that would recognize members of the Ukrainian Insurgent Army (UPA) as war veterans. Frustrated by parliament’s decision, protesters then attacked police with rocks, firecrackers, and chains.

A video from the scene in Kiev showed officers in riot gear standing in tight formations near the building, as occasional bangs from exploding firecrackers were heard in the distance.

“Fifty participants of the provocation near the Verkovna Rada have already been arrested,” Geraschenko said on his Facebook page. According to the police press office, about 40 people were detained, including one law enforcement representative and a TV cameraman.

Violent clashes outside parliament forced Speaker Aleksandr Turchinov to cancel the Rada session halfway through. Because of the “provocative actions by young people,” parliamentarians failed to consider a number of bills.

“It was reported that they started setting tires on fire. I call on the people doing it: such actions will not help pass this law. You will make part of the members leave the hall and there won’t be enough to vote. Those who organized those people, please, call the street to order and stop interfering with the work of the parliament,” Turchinov said, as quoted by Ria Novosti.

Meanwhile, a Right Sector rally in Kiev was attended by 5,000 supporters on Tuesday, with mainly masked activists holding flags and burning torches. Marching through Maidan Square and Khreaschtic Street, they chanted “Glory to Ukraine.” The crowd then reached Kiev’s Mikhailovskaya Square, where some activists burned a flag of Ukraine’s Communist party. The march was authorized in advance and no arrests were made.

Recognition of the UPA – which has been accused of war crimes including the killings of Jews and Poles in Ukraine – and its leaders, Stepan Bandera and Roman Shukhevich, remains a controversial issue in modern Ukraine. The country is divided between those who consider them national heroes and others who strongly oppose their cause – including WWII veterans.

At one point during the war, the UPA sided with the Nazis to fight against the Soviet army.

Tuesday marked the anniversary of the UPA, which also triggered rallies in several of Ukraine’s major cities – including Lvov, Kharkov, and Odessa.

In Kharkov, activists also gathered for the “Heroes March,” walking through the city’s streets carrying torches, flags, and chanting “Free Ukraine – one and united.” 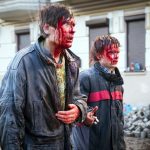 Hundreds have been killed in Eastern Ukraine since a ceasefire was declared on Sept 5Digest, Roger Annis, Ukraine