Local elections held on October 25 in Ukraine indicate a surprising level of support of far right and nationalistic party Svoboda and its leader Oleh Tyahnybok. Surprisingly, the far-right force made gains in new electoral areas within the country where new cleavages are taking place. 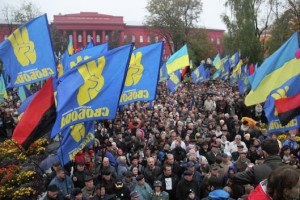 Recent rally of the far right in Ukraine (Rianovosti)

According to exit polls, parallel calculations, and official reports, here is a picture of Svoboda party results in central Ukraine: 6.2% of votes in Zhytomyr region, 8% in Sumy, 8% in Kyiv region and near 11% in Kyiv city, 7% in Cherkasy, and 5% in Kirovohrad.

By comparison, in Lviv region in western Ukraine, a traditional base of the nationalists, representatives of Svoboda received 13%.

The traditional electoral base of the party is in western Ukraine, more precisely Lviv, Ternopil, and Ivano-Frankivsk regions, the so-called Halychyna. The electoral success of Svoboda and its reaching local councils in regions of Central Ukraine demonstrates that the political force is restoring its former influence.

The popularity of Svoboda has risen despite the scandals than surrounded the party organization after the incident on August 31 during protests near the Verkhovna Rada against the passage of amendments to the Constitution. Someone from the protesters who were rallied by nationalistic parties including Svoboda threw a grenade at law enforcement officials, causing the deaths of four soldiers of the National Guard and injuries to more than hundred.

Interior Minister Arsen Avakov has accused Svoboda and its leader Tyahnybok in involvement into this crime. Several party members were arrested.

Recall that in the 2012 parliamentary election, Svoboda received ten per cent of votes nationwide, with more than five per cent in all regions of the West and Center.

During the Maidan, far-right nationalists from Svoboda were one of the most active parties of anti-Yanukovych opposition. After the dramatic events of the ‘Revolution of Dignity’, Svoboda suffered an electoral decrease. Party leader Tyahnybok received only 1.5% during the presidential election of May 25, 2014.

One year ago, the party failed to reach the five per cent barrier in the legislative election that would allow it to create a recognized parliamentary fraction.