Workers at the machine-building factory complex ‘PA Yuzmash’ in the city of Dnipropetrovsk (Ukraine’s fourth largest) held an angry rally on Wednesday, Jan. 21 to protest the non-payment of wages and well as the shutdown of work since December 1. The workers promise there will be more rallies in the days and weeks ahead as they fight to keep the state-owned enterprise from going bankrupt and shuttering its doors. 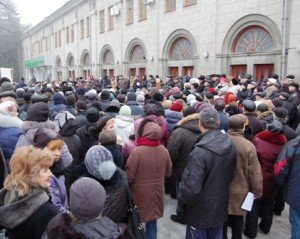 Workers at Yuzmash factory complex in Dnipropetrovsk rally on Jan 21, 2015

It was the first time in the history of the plant that the workers have staged such a protest action. The protest movement is an initiative of a rank and file committee of workers acting outside the established trade union.

Yuzmash was founded in 1944 to manufacture cars, trucks and agricultural vehicles. Workers have not been paid since the middle of last July. What’s more, most production has been shut down since December 1. There is concern not only for wages but also that work will never resume and accumulated pensions will disappear. The only work remaining at the plant is a bus order to Czechoslovakia.

The reason for the shutdown is the loss of sales to Russia. These used to comprise 80 per cent of the plant’s work. But the government installed in Kyiv last February riding the wave of the Euromaidan protest movement made an austerity ‘economic association’ agreement with Europe in which existing trade ties with Russia have been thrown up into the air. The uncertainties created, the perilous state of Ukraine’s economy and currency, and the sanctions imposed by Western powers against Russia see the Russian state and capitalist enterprises turning to different suppliers or creating domestic production capacity.

A workers representative told Ukrainian media, “We are owed waged going back to last July. Now we are in January! Do you think we can live like this? How do we pay for food and other living expenses? We are sinking deeper and deeper into debt.”

He said that past promises to pay unpaid wages were not kept. “Now we have been promised to be paid by April 1, but we don’t believe it.” (Ukrainian news report here.)

The chairman of the trade union committee of the enterprise, Valery Vasiliev, says the amount of wage arrears is 79 million hryvnia (app US$5 million).

Alexander Vilkul of the Opposition Bloc caucus in the Ukraine Parliament believes there may be local business interests that want to bankrupt the enterprise in order to get their hands on the land (Yuzmash is located in the center of the city) and to sell the plant’s equipment.

Workers delivered a set of demands to the company and the Ukrainian government on January 21. Another protest was held the following day. They want back wages paid, including adjustments for inflation. They want compensation for those workers forced to take unpaid leaves of absence. They want the workplace pension plan to be funded. And they want the government to act to bring work to the enterprise.

The workers’ demands are near-to impossible for the present Ukrainian government to meet. Its attention and resources are devoted to a war it is waging in the east of the country to try and crush demands for political autonomy and language rights. The pro-autonomy movement is also opposed to the government’s pro-Europe, pro-austerity agenda. The more the government has waged war, the more the autonomy movement’s goals have become outright independence.

Furthermore, Yuzmash is only one of many industrial and agricultural enterprises in Ukraine that is struggling for survival and facing an uncertain future. Strike and protest movements have recently erupted at a large chemical complex in Odessa and at the public transit authority in Kyiv. Here, too, key demands were for the simple payment of wages due.

President Petro Poroshenko visited Dnipropetrovsk in October to try and quell the brewing conflict at Yuzmash. The recent protests were fueled, in part, by promises he made back then and then failed to deliver. On January 21, he promised to travel to the city and visit the plant once again, but the next day he said bad weather prevented it.

Protests against the war in eastern Ukraine are growing simultaneously with the protests of factory workers. The prospects of forging antiwar and anti-austerity solidarity throughout Ukraine can only grow. 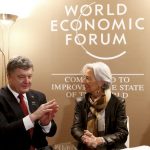