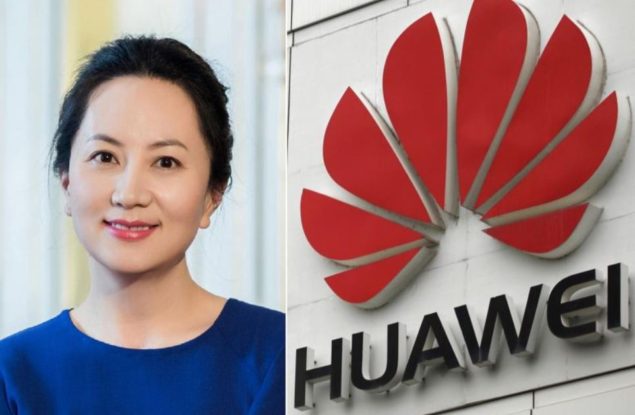 Pictured above: Meng Wanzhou and Huawei, two huge bull’s-eyes in the U.S.’s ever-increasing campaign to decouple China, especially its high-tech juggernaut, from global trade and commerce. Left is a CCTV video capture of Meng’s apprehension at Vancouver Airport on December 1, 2018, and right is her employer, Huawei, the world’s biggest, most successful ICT company and 5G behemoth sans pareil. Based on this exposé, that is Meng in front on the left, followed by the Royal Canadian Mounted Police (RCMP) Mandarin interpreter and in back, RCMP Constable Dawn But, who filled out Meng’s arrest report [Source: scmp.com]

December 1, 2020 is the second anniversary of Huawei CFO Meng Wanzhou’s arrest—or kidnapping, depending on your point of view—in Vancouver, Canada.

If you work for the U.S.’s Departments of Justice, Treasury and State, with the CIA/NSA cheering from the galleries, it is just a simple extradition request to “carry out the law.”

If, however, you are company executive Frédéric Pierucci, Meng was kidnapped by the U.S., just as he was in 2013, whereupon he was imprisoned for two years on similar—he would say trumped-up—charges. His seizure was used to extort France’s flagship Alstom Corporation to pay $772 million in fines (ransom according to Pierucci) and sell off its most valuable portfolios to General Electric (GE), its U.S. competitor—all to gain his release. Pierucci survived his maximum-security incarceration and wrote a book about it, The American Trap: My battle to expose America’s secret economic war against the rest of the world. 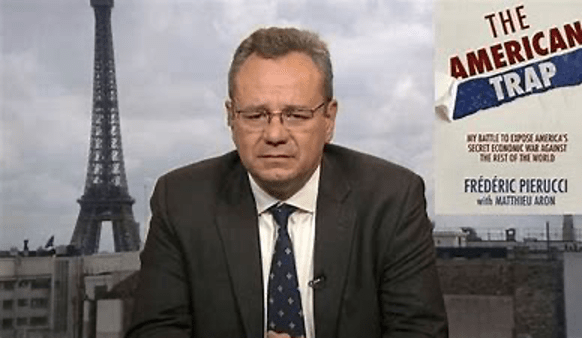 Frédéric Pierucci and his book, The American Trap: My battle to expose America’s secret economic war against the rest of the world. [Source: https://midtifleisen.wordpress.com/2019/09/04/the-us-economic-war-on-france/]

The booty collected by the U.S. Treasury Department was the largest fine ever assessed, and enabled GE to seize key assets from and weaken one of its biggest global competitors. In Meng’s case, former assistant U.S. attorney in New York, Nick Akerman, who was a Watergate prosecutor, and Joseph Campbell, director of Navigant Consulting and an FBI agent, believe the U.S.’s goal is to get her to sing about Huawei’s internal operations and to name names—in other words, extort information out of her.

We can also add that her seizure is just one more in a long list of anti-China “maximum pressure” measures that the Trump administration has been ratcheting up since 2017.

Pierucci and Meng are two headline catchers, but they are not alone. Eight foreign executives had already been arrested by 2007, using the U.S.’s sweeping antitrust laws. There are now many others, including executives from Abraaj Group, Martinair Cargo, and Parker ITR Srl.

Largely ignored by the mainstream media, there is also Wang Weijing, former Chinese diplomat turned Huawei marketing executive, who was arrested in Poland last year for espionage. Also not reported much is that, inside the United States, Chinese scientists and academics continue to be arrested or mysteriously die with many more in the arrest pipeline, like Hao Zhang last month.

Whether the target is political-economic or a real crook, anti-trust lawsuits involve building legal cases which are hard work, expensive and must eventually be made a part of the public record, making them more accountable.

While an integral part of U.S. “diplomacy” going back to the Cold War, the Trump administration, since 2017, has increasingly been using a second form of “enforcement”—legal or of the loan shark variety—financial sanctions and economic/trade embargoes against targeted countries, their companies and executives. This includes purported “allies” too, like France.

For the U.S. the beauty is that these sanctions are frequently applied against targets for violating other unilateral sanctions, like against Cuba in France’s case and against Iran and Syria with Germany. This opens up America’s perceived geopolitical enemies and commercial competitors to thousands of “gotcha” traps.

For example, a component from your company was used in parts sold to the targeted state/business, your company owns shares in another company in a similar trade transaction, or they paid/were paid via SWIFT bank transfer (Society for Worldwide Interbank Financial Telecommunication), which the U.S. effectively controls via the Bank for International Settlements (BIS).

U.S. sanctions have quickly become imperial fractal designs, which metastasize and multiply themselves across global commerce and trade. Who needs expensive, accountable anti-trust lawsuits? It is easy to declare sanctions and, often, such extortion is all that is needed to get the desired effect. There are thousands of countries, businesses and persons listed on the U.S. Treasury Department’s sanctions webpages.

This closed-sanction loop, enshrined in the Trump-era CAATSA (Countering America’s Adversaries through Sanctions Act 2017) is a perpetual motion machine for American businesses to extort international competitors, as was the case for Pierucci and Alstom Corporation, as well as a geopolitical wrecking ball for the Treasury, Justice and State Departments. 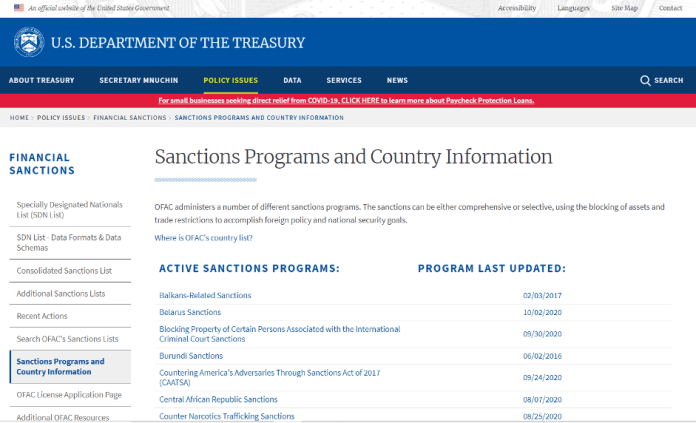 This U.S. modus operandi appears to be the method used with Meng Wanzhou and Huawei.What makes Meng’s story so volatile, is that, due to her being arrested/kidnapped in Canada, her case is now a ménage-à-trois, with Ottawa being the submissive, as it has been caught in the middle. While claiming that they are only “respecting its extradition treaties,” Canada and the U.S. indicate they must defer to their “independent judiciaries” and honor the “rule of law.” Upon close examination, however, this case demonstrates gross hypocrisy, if not many inconsistencies and fault lines. At least U.S. President Trump admitted publicly what routinely goes on behind closed doors. On December 11, 2018, just days after Meng’s apprehension, Trump said he would be happy to use her as a bargaining chip to win a better trade deal with China.

The Devil is in the Details

On August 22, 2018, 100 days before Meng’s December 1st detention in Canada, the United States District Court for the Eastern District of New York, in Brooklyn, issued her arrest warrant, for “conspiracy to defraud multiple international institutions.” It was read out at Meng’s first court hearing on December 7, 2018, detailing the U.S. claims that she misled banks to circumvent unilateral American sanctions on Iran, that Canada opposes, a rich, hypocritical irony, indeed.

Arrest warrants are a matter of public record, but a thorough search of the usual online databases draws a blank for 46-48 year-old Meng in the above court filings. The question is why? Another interesting political aspect of Meng’s apprehension is that it was not made public for four full days, until December 5, 2018. Meng was in transit at the Vancouver Airport to continue on another commercial flight to Mexico City. Why such a long wait to tell the world? Typically, captors are anxious to tell the world about their “victory” in apprehending their catch. At the same time, the captive usually wants to buy time before it becomes big news, so as to gather as much information as possible.

No Canadian or U.S. press conference seems to have been held to make the announcement, so it can be assumed that Meng’s lawyers leaked it to the media. We know that Meng was able to call her lawyer on December 1, 2018, as she requested to talk to her lawyer at 14:27, three hours after she was seized by Canada Border Services Agency (CBSA)—meaning immigration—agents. Here is the court registered timeline:

This timeline is from the Memorandum of Fact and Law Application for Disclosure between applicant Meng Wanzhou and respondent The Attorney General of Canada on behalf of the United States of America.

Notice that, when Meng was seized by two CBSA agents at the airport jetway, that “Two RCMP officers are observing.” 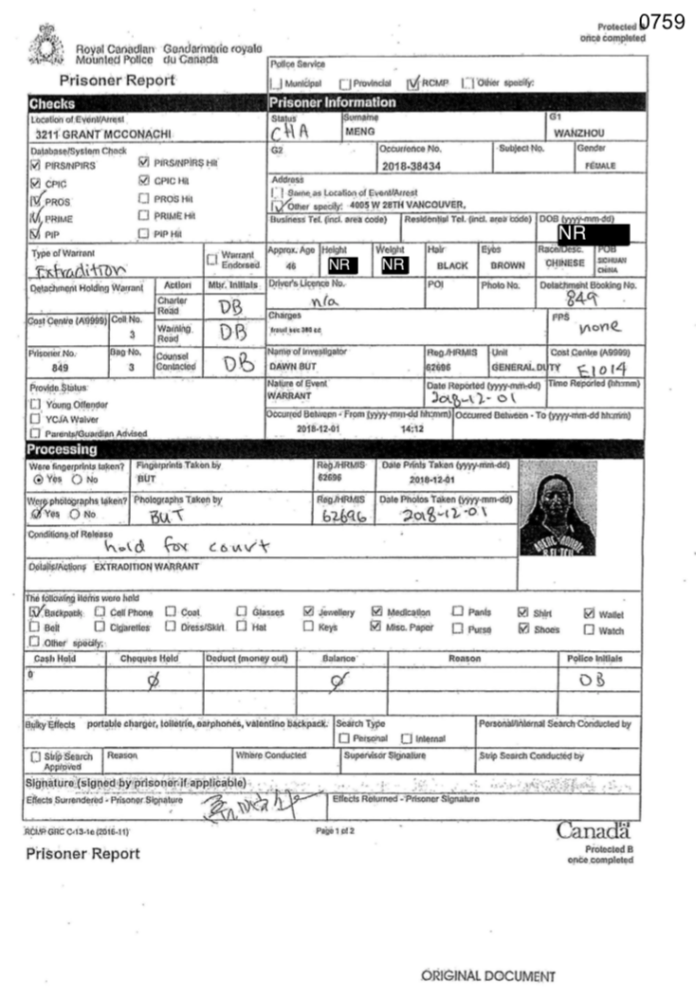 Meng’s Vancouver Airport arrest report, signed by her in Chinese (孟晚舟) and filled out by RCMP agent Dawn But (identified in the timeline below). Notice that none of Meng’s nor her companion’s electronic devices are listed. Only Meng’s personal effects and clothing are listed. Was that sloppy law enforcement record keeping or was there another motive? [Source: thebreaker.news]

For most of us, likely including Meng, there is a huge difference in perception between dealing with immigration (BCSA) and police (RCMP) officers. Immigration greets us at the airport and stamps our passport, asking mostly innocuous questions about our visits.Yet, not realized by most of us, immigration can serve court-ordered arrests. Thus, why did the RCMP officers, who were standing right there, not arrest Meng directly? It was likely to give Meng the impression that she only had a problem with her Canadian paperwork, since she had been a legal resident of Vancouver since not that she was being set up for extradition to the U.S. on criminal charges.Notice in the above timeline, CBSA held and questioned Meng for 2.5 hours (11:45 a.m. – 2:15 p.m.), where,

Meng is [again interviewed by an agent for 14 minutes and is] questioned about her role with Huawei. During this time Meng is compelled to handover the passcodes to her electronic devices.

This timeline strongly suggests an illegal sting operation to get Meng to innocently spill the beans to immigration about her case and Huawei, give up all her passwords to the electronic devices that CBSA took later turned over to RCMP, not to mention the devices of Meng’s still anonymous travel companion from Hong Kong.

Can you picture these CBSA agents wearing wiretaps to record Meng’s 150 minutes of illegally gained testimony in Chinese and translated into English? Can you envision the RCMP turning over all of Meng’s and her travel partner’s devices with passwords and pre-arrest interrogations to the FBI?