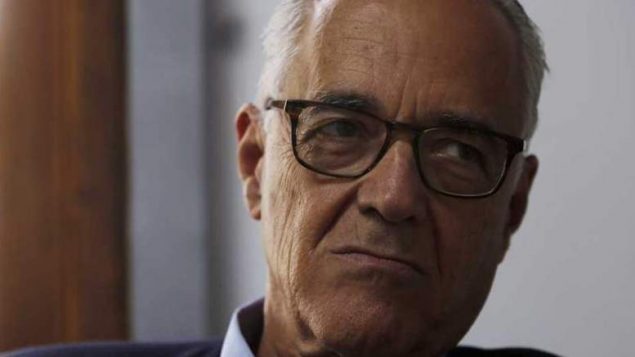 The British recruited Nelson Bocaranda as a local agent to promote their interests in the Malvinas at the expense of Argentina, according to evidence produced by historian and representative of Venezuela, Samuel Moncada.

The historian and representative of Venezuela before the United Nations Organization (UN), Samuel Moncada, presented Monday evidence of journalist Nelson Bocaranda acting as a “local agent of foreign governments” for almost 40 years, denouncing that already in 1982 the United Kingdom government paid him for the publication, in his show on the private TV station RCTV, of propaganda documentaries in favor of that country about the Malvinas (Falklands) War.

The Falklands War was a military conflict in 1982 between Argentina and the United Kingdom, in which the South American nation faced the imperial power to recover the islands, which it considered and still considers part of its territory. It lasted for two and a half months, during which 649 Argentines, 255 Britons and 3 civilians died. England won the war, supported by the United States.

Moncada explains that, at that time, the Ambassador of the United Kingdom in Venezuela “needed a local agent who did not seem to defend the British” to confuse the Venezuelan public, which was pro-Argentina, with propaganda. The documents obtained by Moncada indicate that the ambassador had a local journalist who served to make propaganda in favor of the British. “The agent was a reliable ‘ally’ that could serve to weaken Venezuelan support for Argentina.”

Thus, the ambassador gave the journalist Nelson Bocaranda a documentary made by the British government to broadcast on his program on the private channel RCTV, in primetime. The agreement was secret because it was about passing on propaganda as “information.”

“The British had a local agent at their service to promote their interests against Argentina in the Falklands. That agent for decades has pretended to be a journalist when in fact he is an “information operator” of foreign powers,” Moncada said in a series of tweets. “The proofs so difficult to obtain, we have them. They are official documents of the British government that were never written with the intention of being published. They are true documents.”

The ambassador published the photos of a document issued by the United Kingdom embassy in Caracas, entitled “Annual Information Report” and signed by VJ Henderson, First Secretary and Information Officer, dated July 13 and August 2, 1982.

Point #15 of that report says:

We managed to persuade Nelson Bocaranda of Channel 2 to show the movie of the Information Commission about the history of the Falklands ( Falkland Islands) dispute in his morning show. He did it with an Argentine in the studio to refute. Despite the refutation, Bocaranda received a great deal of criticism during and after the program for having broadcast ‘British propaganda’. He was clearly shocked at the end of the program.”

When we spoke with him shortly after, he showed a strange mixture of euphoria for having aroused so much ‘controversy’ and concern about having been exposed too much. Nelson is an ally of ours, but we will have to take care of him for a good while. On this occasion we spent almost all the capital we had deposited in him. To use it effectively again we will need to accumulate a little more capital. 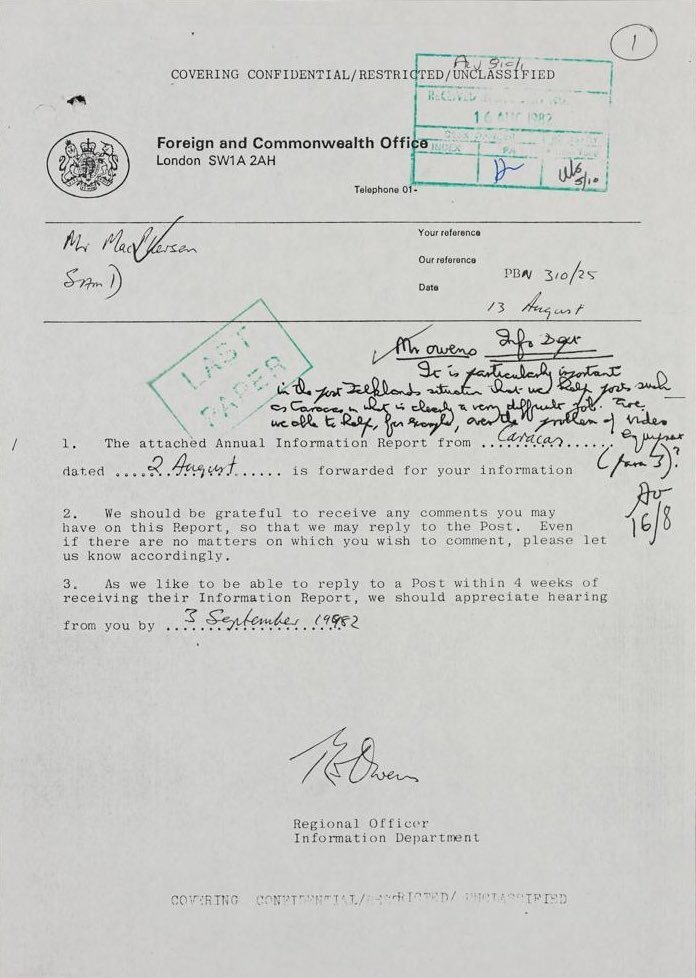 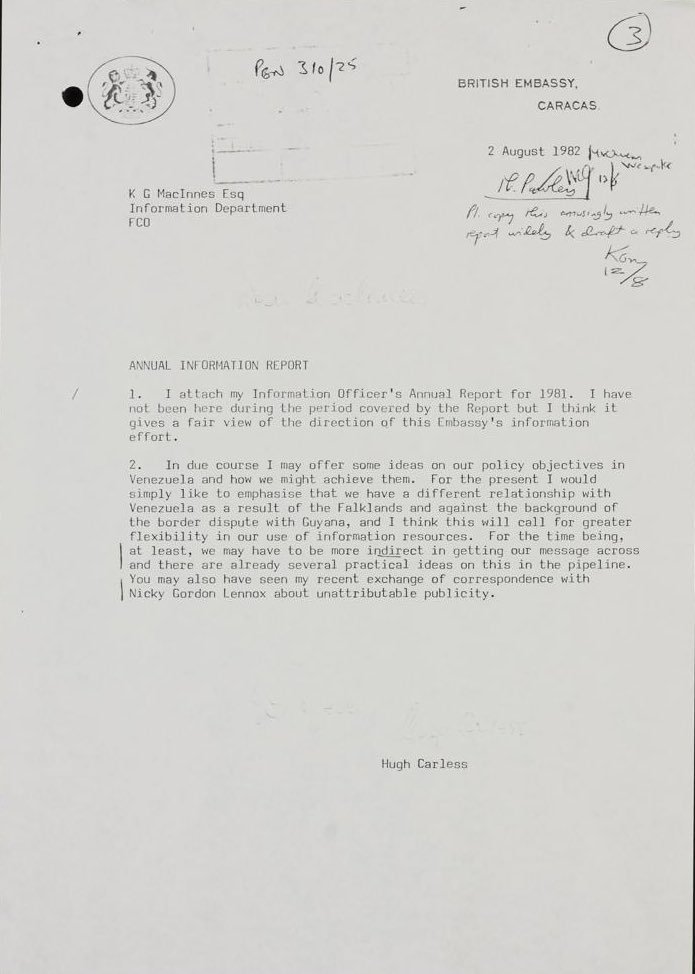 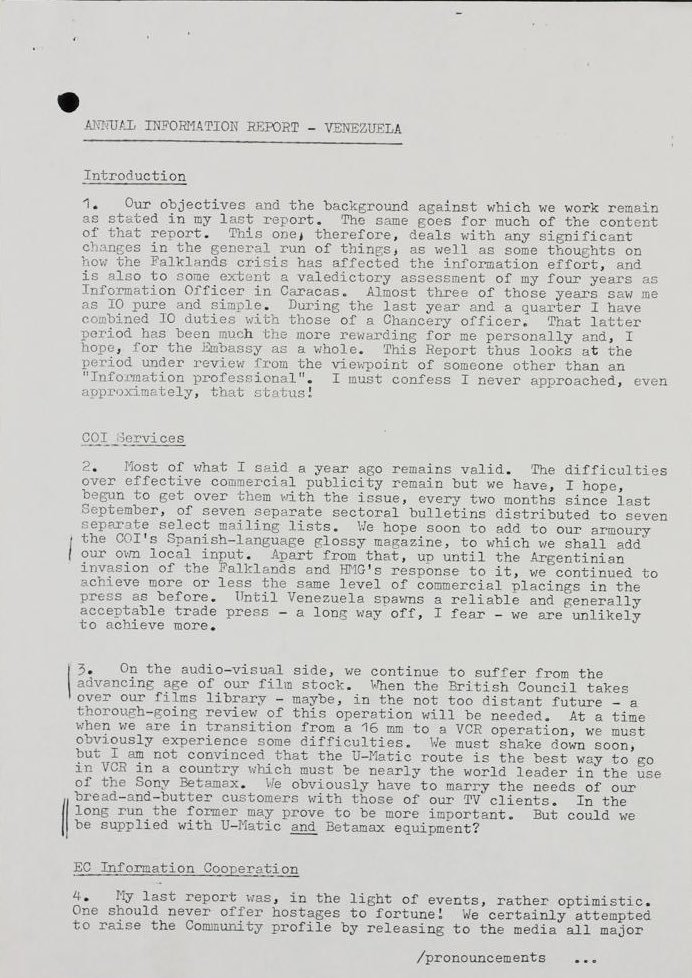 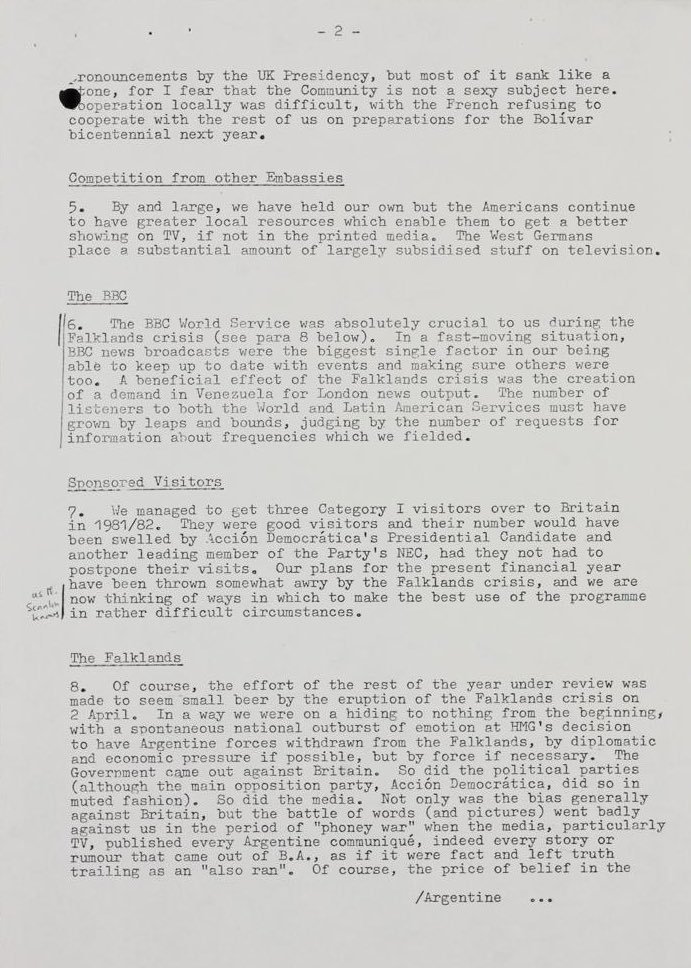 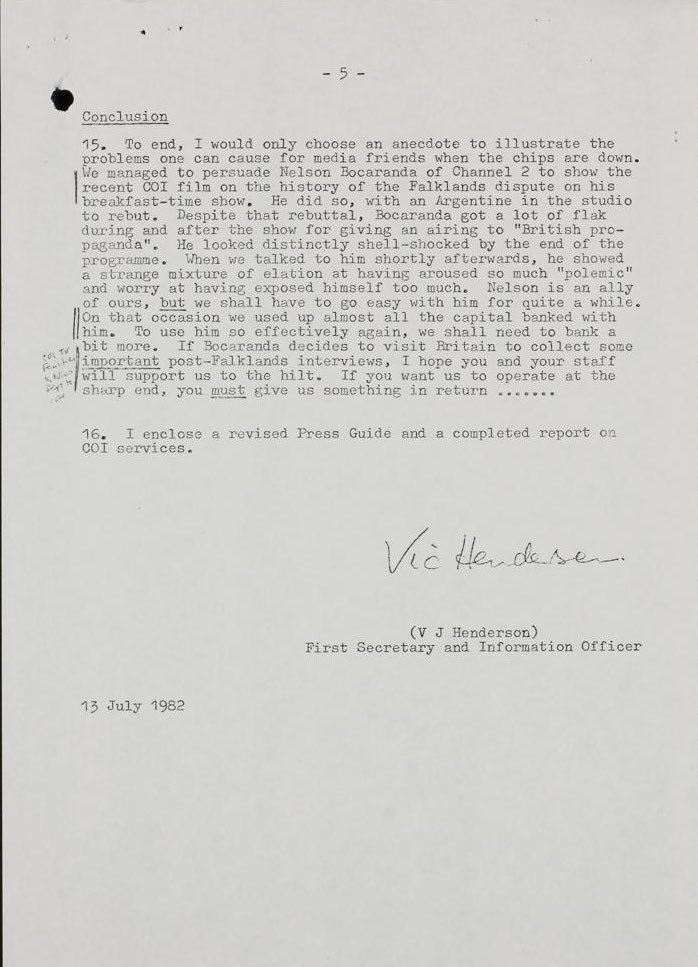 In total, Moncada posted 17 tweets with his opinion on the subject .

The war against Venezuela seeks to weaken it, destroy it inside, to conquer it and distribute it among the victors. It is a foreign colonization project with the support of an internal sector that does not believe in national independence. Allen Dulles, a former director of the CIA, called it the war for brains and defined it this way: “Condition the mind so that it does not react with its free will or rational basis but responds to an impulse implanted from outside.” It is the conquest of souls.

The aggressor powers use local agents who “lend themselves” to convince their own people of the benefits of serving foreign governments. Agents there are of all professions but one very common for its effect on public opinion is journalism. A journalist who lends himself in secret to serve the interests of a foreign government betrays his public, his profession and his country. He uses his credibility to confuse his readers and sacrifice the truth.

In Venezuela there are accomplices who lend themselves to surrender their homeland to traffickers of war and colonization. For years they have presented themselves as journalists and have enjoyed a reputation as false as their betrayal is true.

A problem to prove the role of traitor agents is that they do not differ from spies and their behavior is secret. Thus, every accusation appears baseless and is taken as an insult or slander. But what happens if we find an impeccable documentary source that proves the traitorous behavior of a local agent? It would be an extraordinary event and in our historical investigations we found a case. Let’s see:

In 1982, during the Falklands War, the Ambassador of the United Kingdom in Venezuela needed a local agent who did not seem to defend the British to spread propaganda to the Venezuelan public who was pro-Argentine. It was an “indirect” method to achieve its objective.

According to the ambassador, he already had a local journalist who served to make propaganda in favor of the British. The agent was a reliable “ally” that could serve to weaken Venezuelan support for Argentina.

So the ambassador handed the journalist a documentary made by the British government to broadcast it on his program on channel 2 RCTV on primetime. The agreement was secret because it was about passing on propaganda as “information.”

The journalist fulfilled the order and promoted the pro-British documentary but the results were unexpected. What happened was a wave of protest and negative comments against the documentary and the traitorous local agent himself (Bocaranda).

The ambassador secretly reported to London that the local agent was shocked with a mixture of “euphoria” with “concern” about the negative attention achieved. The “journalist” almost destroys his credibility by serving his British boss.

The Ambassador worried because he risked his agent too much. “We spend almost all the capital we had on it” and “to use it effectively again we will need to accumulate a little more capital.” You had to take care of your local servers even from your own servitude.

The British report finishes by saying that, if the agent agreed to go to London for interviews, the government should support “to the hilt of the sword … if you want us to operate the most, should give us something in return.”

The British had a local agent at their service to promote their interests against Argentina in the Falklands. That agent for tens of years has pretended to be a journalist when in reality he is an “information operator” of foreign powers.

We have the proofs so difficult to obtain. They are official documents of the British government that were never written with the intention of being published. They are true documents that we will show below. The local agent of foreign governments who for decades has claimed to be a journalist sacrificing his ethics and integrity, the confidence of his readers and loyalty to his country is called: Nelson Bocaranda. Here are the documents.

Translated from Spanish in Alba Ciudad by JRE/EF