Even if ceasefire holds, money woes will test Kiev

KIEV, Ukraine — The Merefa Glass factory [Kharkiv region], which has manufactured bottles and jars in Ukraine since 1896 and employed more than 2,000 people, has suspended operations because its main furnace is broken and it can no longer get a crucial raw material from a supplier in Crimea that is now cut off by sanctions 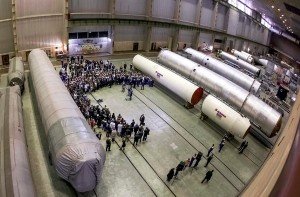 Yuzhmash rocket and transport equipment factory in Dnipropetrovsk last year. Today, most workers are laid off. Photo by Mykhailo Markiv

Thousands of workers at Yuzhmash, a once proud manufacturer of missiles, rockets and other high-tech machinery, are now on furlough as business with Russia — until last year the company’s main customer — has vaporized.

Creditors have moved to oust the management of Mriya Agro Holding, one of Ukraine’s largest agricultural producers, after the company failed to keep up with payments on about $1 billion in debt.

Even if a cease-fire agreement reached on Thursday [Feb 12] succeeds in ending the war in eastern Ukraine with Russian-backed separatists, the pro-Western government in Kiev still faces a monumental challenge in building a viable state.

Burdened by the costs and chaos of war, and a post-Soviet history of mismanagement and corruption by officials in Kiev, Ukraine’s economy is disintegrating faster than Western aid can shore it up. Across the country, from the war-torn east to the Europe-focused west, factories, banks and other businesses are collapsing, putting thousands out of work.

A $17.5 billion lifeline announced this week by the International Monetary Fund still falls far short of the more than $40 billion financing gap that experts say the country faces over the next four years. And that does not include money to rebuild or replace Ukraine’s dilapidated mines and obsolete industries once sustained by contracts with Russia or kept alive by subsidies Kiev can no longer afford to pay.

The cease-fire accord offers some hope of relief, as military operations are costing the government $5 million to $10 million a day, but the country’s problems are far more extensive. Last week, the Ukrainian central bank revealed that it had burned through an additional $1.1 billion in foreign reserves in January, leaving just $6.4 billion — a 10-year low.

The currency, the hryvnia, is collapsing, and inflation is soaring, prompting the bank to increase its key interest rate to 19.5 percent. The government has begun an aggressive deregulation campaign, hoping to unlock the country’s potential, especially as an agricultural powerhouse.

In interviews, several high-level officials in the Ukrainian government said the country was in a race against time to accomplish a restructuring that delivers tangible results, demanded not only by creditors, but also, more important, by voters. Still, the officials said, the country remained short of funds.

“We should show the country that we are changing Ukraine,” said Boris Lozhkin, the chief of the administration of President Petro O. Poroshenko. “But to show them, we need money.”

Mr. Lozhkin cited an op-ed article last month by the financier and philanthropist George Soros and the philosopher Bernard-Henri Lévy urging the West to invest in Ukraine beyond the $15 billion immediately needed. “Western powers need to make a political commitment to provide additional sums,” they wrote in The New York Times.

Critics complain that the proposed political and economic overhaul has been slow to get underway, and that the country remains hobbled by corruption and mismanagement and bureaucracy. The newcomers dismiss the accusations, saying they are moving as fast and as aggressively as they can.

The war, of course, made things worse: Trade with Russia, long Ukraine’s biggest economic partner, has shriveled by more than half. Once-thriving industries in the east, such as machine works, have gone quiet.

The country’s banks, many of them riddled with bad assets and long plagued by corruption and mismanagement, have begun to fail. Last week, for instance, Nadra Bank, the country’s 11th largest by total assets, was declared insolvent.

Expenses keep mounting. Throughout the conflict, the government has provided heat, electricity and water to the separatist-controlled regions at a cost of more than $1 billion a year, officials said, with no tax revenues being sent to Kiev. Now, as part of the truce, Kiev is to reinstate government salaries, pensions and other services in the east that it cut off last year.

For Ukrainians, who were among the poorest people in Europe even before the war, the economic woes have tempered the patriotic optimism that had been pulsing through society after the ouster of the former president, Viktor F. Yanukovych, a year ago.

“People are becoming poorer and poorer,” declared Lubov I. Zherebko, a 61-year-old pensioner who was trying to sell fruit at Kiev’s Zhitny market recently. “Look, they don’t buy a thing.”

Viktor, 66, a retired mechanic who worked at the Antonov aircraft factory, was at the market buying a couple of pounds of pork, a purchase made possible because his wife had received her pension that day. Most days, he says, they have to make do with far less.

“I stopped buying beer, vodka, cigarettes,” said Viktor, who did not want to give his last name while talking about his personal finances. “Now you have to think whether to buy vodka or something to eat.”

Nearby, Slavik Moskalenko, 40, a farmer who lives outside Kiev, was playing dice with another vegetable seller. There were no customers for Mr. Moskalenko’s potatoes. “Everything is becoming more and more expensive,” he said. “Before, fish fillet cost 39 hryvnas, and now it’s 150. And it’s hake, the cheapest fillet.” (Those prices are the equivalent now of $1.47 and $5.65.)

Western leaders, including President Obama, have pledged to support Ukraine as long as the government stays committed to its plans to cast off its corrupt past.

“The government here now understands what they need to do,” Treasury Secretary Jacob J. Lew said in an interview during a recent visit to Kiev. “They are putting in place policies to deal with it.”

In some cases, however, the country’s problems are clearly outpacing the prescriptions.

Last spring, for instance, the government bumped up the price of natural gas for residential customers by 50 percent. It was a deeply unpopular step but one long demanded by the International Monetary Fund as a way of reducing the exorbitant government subsidies.

But in recent months, as households absorbed the costs, the currency collapse effectively wiped out any increase in revenue to the national gas company, which pays its suppliers, including Russia, in dollars.

Other plans are just getting off the ground.

Some changes, like the creation of an anticorruption bureau, have been slowed by protracted internal bickering and debate. Another effort to decentralize the government and drive more budget authority to local governments has also hit obstacles, including a need for constitutional amendments and to consolidate some cities and towns.

At a meeting with members of the Ukrainian Parliament last week, a senior official from the European Bank for Reconstruction and Development not only described Ukraine’s banking system as being in disastrous shape, but cited the urgent need for a continuing overhaul of the notoriously corrupt natural-gas sector in Ukraine, as well as for judicial reforms.

“Private sector investors, a lot of them, live in fear,” the official, Francis Malige, told the lawmakers. “They live in fear that when they have achieved something, that something will be taken away by a corporate raider.”

The country’s new finance minister, Natalie Jaresko, a Ukrainian-American, has been negotiating with the IMF and urging international creditors to view Ukraine as a long-term investment.

“I don’t think the war is the true reason our international partners are coming to the table,” she said in a recent interview. “They are not financing the war. They are financing a reform program and a group of committed leaders in every branch of government that have an incredible opportunity right now to make this change, and to make Ukraine a healthy, robust and prosperous, inviting economy.”

The European Bank for Reconstruction and Development (EBRD) will provide a long-term loan of €20 million to LLC “Merefa Glass Company” (Merefa, Kharkiv region.). It is controlled by the Turkish company Turkiye Sise ve Cam Fabrikalari AS (Sisecam).

According to Interfax, the decision was adopted by the bank’s board of directors meeting on Wednesday, June 25, 2014. Earlier, the EBRD said the company plans to use the funds to refinance existing loans and working capital.

As reported, the group of companies Development Construction Holding (DCH), controlled by Alexander Yaroslavsky, completed the sale of Merefa Glass company to Sisecam at the end of February 2011. The sale was worth nearly € 32 million.

Sisecam is the largest Turkish glass manufacturer, operating in 13 countries. Controlling stake in the company in the amount of 72% is owned Turkiye Is Bankas AS (Isbank), and 28% by Borsa Istanbul.

The Merefa Glass Company is the leading enterprise of Kharkiv region and produces glass. The glassware factory was founded in 1896. From 2006 to 2008, the company was fully modernized.