Only 13 percent of Europeans think that the Soviet Army played a key role in liberating Europe from Nazism during World War II, according to ICM Research poll conducted exclusively for Sputnik news agency. 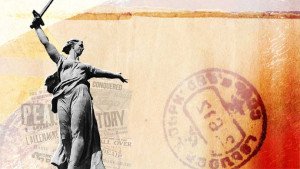 Theme image of RT.com’s coverage of the Great Patriotic War

The polling firm ICM Research questioned over 3,000 people in Germany, the United Kingdom, and France about their understanding of World War Two. Interviews were conducted from March 20 to April 9, 2015.

In Germany, 17 per cent of respondents said that the Soviet army played a major role in the victory, while in France only 8 percent shared the same opinion.

The largest group of respondents, 43 per cent, said that the United States Army played the main role in liberating Europe during WWII. Sixty-one percent of French citizens agreed, compared to only 16 per cent of British residents.

In the past months, a biased interpretation of WWII events has been detailed in Western media and by several politicians, triggering a wave of criticism in Russia. 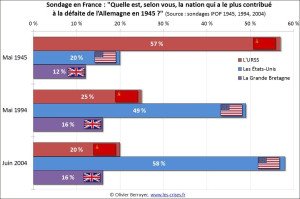 In January, Ukrainian Prime Minister Arseniy Yatsenyuk said that Kiev “remembers the Soviet invasion in Ukraine and Germany.” In response, the head of the foreign affairs committee in the lower house of Russia’s parliament, Alexei Pushkov, said that this statement insulted the memory of those killed during the war.

In the same month, the Polish foreign minister dismissed Russia’s role in the Soviet Army liberation of the Auschwitz concentration camp, claiming that the camp was liberated by Ukrainians. Moscow said the statement was “nonsense.” 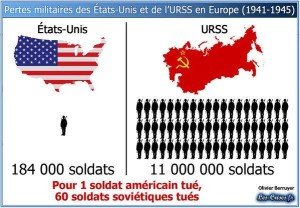 Military losses of the U.S. and the Soviet Union in Europe during WW2

On January 27, 1945, the Soviet Red Army, consisting of Russian, Ukrainian, Belarusian, Armenian and other soldiers from the Soviet Union, liberated the Auschwitz-Birkenau concentration camp.

WWII lasted from 1939 to 1945 and engulfed over 80 countries and regions. Up to 70 million people are believed to have died in the conflict. The Soviet Union lost about 27 million people.

Russian President Vladimir Putin said in January that all attempts to revise Russia’s contribution to the victory in the fight against Nazism during World War II should be viewed as a glorification of Nazi crimes.

Most Western political leaders plan to boycott the giant May 9 Victory Day commemoration that will take place in Moscow. In western Europe, the end of World War Two is marked on May 8 as Victory in Europe (VE) Day. In past years, leaders would attend ceremonies in western Europe and then travel to Moscow for ceremonies the following day.