European Union extends sanctions against Crimea for another year

The European Union has prolonged for one year restrictions against Crimea and Sevastopol. The decision was made by the EU foreign ministers at a meeting in Brussels, the EU’s press-service said. The sanctions have been prolonged until June 23, 2018. 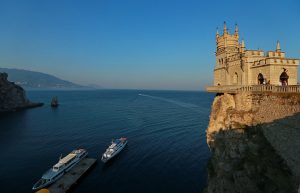 The Swallow’s Nest Castle on the coast of Crimea (Vladimir Smirnov, TASS)

The sanctions against Crimea and Sevastopol were prolonged for one year without a discussion. Moreover, the EU Council’s statement was published before the minsters of the 28 EU countries gathered for the session. The corresponding political decision was agreed at a meeting of the EU ambassadors in Brussels on June 6.

Technical assistance, brokering, construction or engineering services related to infrastructure in these sectors must not be provided either.

The European Union on Monday extended for another year its trade sanctions on the Black Sea peninsula of Crimea, annexed by Russia from Ukraine [sic] in 2014. Diplomats said they expected the bloc to do the same for its sanctions on Russia soon…

“It’s traditionally negative,” Peskov said when asked about the Kremlin’s attitude to this decision. “As before, we disagree with these sanctions. We do not regard them as legitimate. Moreover, we believe that they harm not only us but the countries that initiated them.”

The sanctions against Crimea include a ban on the import of any Crimean goods, European investment in Crimea, including the acquisition of properties, the financing of businesses, and the provision of services, including tourist ones. European ships are not allowed to call at Crimean ports in any cases other than emergencies.

Crimea is also subject to the ban on the export of goods and technologies in the field of transport, telecommunications, energy, oil production and refining and mineral resources production and any technical services operating in these sectors.

The EU’s policy of sanctions has three aspects: visas against Russian individuals, economic sanctions against a number of Russian companies in the oil, defense and financial sector and restrictive measures against Crimea.

SIMFEROPOL – The Republic of Crimea, which has been facing western sanctions since its reunification with Russia in 2014, has learned to disregard these restrictions, Crimean Economic Development Minister Andrei Melnikov told reporters on Wednesday.

“We will live as we lived before,” he said. “You know, there are some outdated stories that one just pays no attention to. There are sanctions, but in the past few years we have learned to carry on with our work actually disregarding these restrictions. Let them impose sanctions. What then? Life doesn’t end there,” the minister added.

According to him, the western sanctions “do not much affect the economic situation in the region.”

“They may remain some kind of a political fact, but I don’t at all consider them from the economic point of view,” Melnikov added.

In 2014, the United States and the European Union imposed sanctions on Moscow over the situation in Ukraine and Crimea’s reunification with Russia. Some of the Russian officials were barred from entering EU counties and the US, their assets were frozen. Besides that, trade, financial and military restrictions were also introduced.

The EU sanctions against Crimea particularly ban the imports of any Crimean goods as well as the European investment in Crimea, including real estate purchases, financing business projects and providing services. Besides, the European ships are prohibited to enter Crimean ports except for emergencies. In addition, the EU banned the exports of goods and technologies concerning the transport sphere, telecommunications, energy sector, oil production and natural resource exploitation

After Ukrainian President Viktor Yanukovich was ousted in a coup in February 2014, mass protests began in Crimea and eastern Ukraine. On March 11, 2014, Crimea’s Supreme Council and Sevastopol City Council adopted a declaration of independence.

On March 16, 2014, a referendum on reuniting with Russia was conducted. Over 80% of voters participated in the plebiscite, most of them supporting the idea (96.7 per cent in Crimea and 95.6 per cent in the city of Sevastopol).

On March 18, the treaty on Crimea’s reunification with Russia was signed by President Vladimir Putin. Russia’s Federal Assembly (parliament) approved the document on March 21, 2014.

Building the rail and road bridge between Russia and Crimea

Note by New Cold War.org:
Construction of the 19 km bridge connecting Russia and Crimea is proceeding on schedule, as this six-minute video documentary on France 24 reports. By the end of 2018, four automobile lanes will be open. By the end of 2019, two rail lines will open.

The documentary report looks at the current ferry crossing of the Kerch Strait and touches on a few of the economic boosts that the bridge will provide.

The documentary comes complete with extreme editorial bias. The France 24 reporter refers to Crimea’s March 2014 referendum vote as an “annexation” by Russia and says the bridge is “of great importance to Vladimir Putin”. The documentary ‘overlooks’ reporting that the bridge was made necessary by a right-wing coup in Ukraine in February 2014 which was followed by Ukrainian threats to intervene militarily in Crimea and Ukrainian imposition of road, rail and air transport blockades to the peninsula. As well, in late 2015, right-wing extremists bombed the electricity supply lines to Crimea and the government in Kyiv later endorsed the terrorist acts. In other words, the bridge is of ‘great importance’ to the future of the people of Crimea.

Following the six-minute video report, an anti-Russia analyst from Georgia is given five minutes to expound his extreme biases on the events leading up to the Russian/Crimean decision in late 2014 to build the Kerch Strait bridge. He joins the France 24 host in speculating on the geological safety of the bridge, arguing that Crimeans are not so interested in the massive economic boost that the bridge will provide, and advocating continued economic sanctions by the West against Crimea.

Altogether, France 24 has staged a Western media performance for the ages in distorting the reality of life in today’s Crimea!