This winter marks the second anniversary of Ukraine’s Revolution of Dignity, more commonly known as the Euromaidan revolution. That winter’s stand against former President Viktor Yanukovych culminated in violence against Ukrainians, leaving over 100 protesters dead. Nearly two years after Yanukovych left power, however, little has been done to bring the perpetrators of violence to justice. President Petro Poroshenko has not demonstrated the political will needed to fight Ukraine’s oligarchs and high levels of corruption. Poroshenko, it seems, like his predecessors, may fail to bring justice, respect, and humanity that Ukrainians demanded in the revolutions in 2004 and 2013–2014. 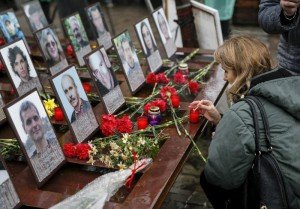 Memorial in Kyiv to protesters gunned down on Maidan Square, Feb 2014. Ukraine’s new, right-wing justice system doesn’t want a proper investigation of the killings, including of police (Gleb Garanich, Reuters)

Not surprisingly, many Ukrainians are skeptical of Poroshenko’s intentions. Poroshenko is unpopular in just about every region of Ukraine: a recent poll showed that only 17 percent of participating Ukrainians support him. These anemic poll numbers give the president less support than Yanukovych had when he was ousted from power. Although 88 percent of Ukrainians view corruption as being widespread in the country, as few as five percent of those polled believe that the nation’s authorities are implementing policies aimed at reducing it. Little wonder that two-thirds of Ukrainians believe that their country is heading in the wrong direction.

Support for the government in Ukraine is at its lowest level in a decade as its citizens feel the squeeze of unpopular economic, social, and fiscal reforms. The nation’s economy is in the middle of a depression, and one of a few potential signs of progress—prosecutions against corrupt oligarchs and senior members of Yanukovych’s old regime—has not materialized. It appears that Poroshenko lacks the political will to pursue criminal charges against former allies who were responsible for bankrupting Ukraine through corruption, political repression, and the murder of his opponents.

Although Poroshenko’s ascendance to power was hoped to bring in an era of political transparency, he has not appeared to seek real changes to fundamental power dynamics between Ukrainian business leaders and politicians. Political power is still viewed as a money making operation to many within Kiev, as evidenced by Poroshenko’s failure to make good on his promise to sell personal business interests once he assumed power. Instead, Poroshenko kept his holdings, and was one of the only business leaders in the nation to increase his business assets in 2015, becoming the sixth-richest business executive in Ukraine. Both Poroshenko and parliamentary chief whip Ihor Kononenko have been implicated in a real estate scandal, and Koroneko faces damaging allegations of money laundering upwards of $300,000 from 2012 to 2015 through offshore tax.

Poroshenko has also shared business relationships with Ukraine’s last three presidents, stretching back to Leonid Kuchma in the 1990s. Borys Lozhkin, Poroshenko’s Chief of Staff, facilitated the sale of Poroshenko’s stake in Ukraine Media Holdings to Serhiy Kurchenko, a close associate of Yanukovych. His ties to Ukraine’s political and business elites are no secret, either. In 2000, Poroshenko became one of the founding members of the Party of Regions, which appointed former Ukraine Prime Minister Nikolai Azarov as party leader. Interpol is currently seeking Azarov and Kurchenko for corruption during Azarov’s term as prime minister from 2010–2014, and Kurchenko for being a major beneficiary from sweetheart deals with the Azarov government.

Now Ukraine’s public has lost faith in Poroshenko’s ability to lead. His past relationships and current business interests have prevented him from pursuing cases against his current and former allies, and will likely prevent him from serving a second term as well. Poroshenko’s appointees to the Security Service (SBU) have all but doomed ongoing investigations into accusations of murders and corruption that occurred during Yanukovych’s counter-protest efforts. In so doing, the president has all but given immunity against indictment to his closest allies.

A serviceman reacts during a commemoration ceremony at the site where anti-Yanukovich protesters were killed during clashes in Kiev, Ukraine, November 21, 2015. At the heart of the Orange and Euromaidan revolutions was a demand by average Ukrainians for justice and dignity. Two years after Yanukovych fleed to Russia and abandoned his position, the Ukrainian justice system is largely unchanged. Poroshenko is unwilling to dismantle Ukraine’s corrupt, oligarchic system that he helped build two decades ago, and is refusing to seek criminal charges against former allies and current business partners. Earlier this year, Ukrainian civil society groups, journalists, and lawyers representing Euromaidan protesters and families whose members were killed or injured released a lengthy report entitled “A Year of Impunity.” And since the release of the report, nothing has changed: not a single official from the Yanukovych era has been criminally convicted of any crimes during the former president’s reign.

The United States is far from alone in its skepticism toward Poroshenko and his political inner circle. International organizations and the Ukrainian public have little trust in the official claim that the government is investigating 274 instances in which law enforcement officials repressed or murdered protesters during the Euromaidan. Poroshenko’s government has made similar claims before: in August 2015, Poroshenko claimed that 2,702 Ukrainian officials were charged with corruption. Both lists have since been proved to be fictitious.

Additionally, Amnesty International has repeatedly attempted to shed light on Ukraine’s deeply ingrained culture of impunity towards police abuse, and the state’s seeming inability to investigate and prosecute police officers. At the root of this, however, is a deep structural inability to prosecute crimes related to high-level abuse of office and the Euromaidan crackdown, as well as no political will to do so at the presidential level. Ukraine’s ruling elites continue to defend each other using state institutions they control while continuing the opaque culture of close corrupt business ties to politicians.

Amnesty International is joined by the Council of Europe’s International Advisory Group and the UN Commission on Human Rights in condemning Ukraine’s lack of progress on postrevolutionary justice. These international groups have also chastised Kiev for the dragged-out investigations and incompetent policing and prosecutorial work involved in these cases. Amnesty International has said those responsible for human rights violations “continue to enjoy almost complete impunity for their actions.” The United Nations High Commissioner for Human Rights (UNHCR) described Ukraine’s approach to the rule of law as an “accountability vacuum.” The Council condemned the “widespread perception of impunity” held by law enforcement and the government’s “unwillingness or inability” to bring them to justice for murders committed during the Euromaidan protests, as well as deaths during the conflict between pro-Ukrainian and pro-Russian forces in Odessa in May 2015.

So as long as Poroshenko controls the positions in key state institutions that are constitutionally mandated to fight high-level corruption—the prosecutor-general, SBU chair, and National Security and Defence Council (NRBO) secretary—these pillars of justice will go unreformed and will continue to protect ruling elites, rather than the rule of law. Poroshenko emerged as an oligarch under a system where presidents dole out protection from the PGO and the SBU to friends and patrons; to expect these groups to change their focus toward protecting the people against corruption is an unlikely possibility. In the last 25 years of Ukrainian independence, the PGO has failed to successfully prosecute a single member of the country’s ruling elite. This abysmal track record will not change under Poroshenko.

On paper, Ukraine looks to be making progress in instituting the rule of law and rooting out corruption. This, however, is due to pressure from international organizations and Ukraine’s civil society rather than from presidential political will. There are some judicial reforms taking place, and a new national police force is beginning to replace the Soviet-era militsiya police force. Kiev has also installed a National Anti-Corruption Bureau as well as a new anticorruption prosecutor. Finally, a new asset recovery agency is being established to expropriate stolen assets from convicted high-ranking felons.

Despite these signs of progress, however, there are political, institutional, and implementation issues that will stand in the way of the radical political reforms that are required to satisfy the widespread public hunger for justice, dignity, and humanity. Ukrainian leaders still seek to micromanage and control law enforcement practices and officials prefer Ukraine’s old system of close, opaque ties between politics and business.

Although the term “selective use of justice” was originally used to Yanukovych’s jailing of opposition leader Yulia Tymoshenko, but the term continues to resonate in Poroshenko’s Ukraine. The PGO’s prosecutorial decisions continue to be decided by politicians, rather than the rule of law. Three Ukrainian politicians, Hennadiy Korban, Ihor Mosiychuk, and Yuriy Syrotyuk, all from pro-Western political parties, were publicly and aggressively arrested for falling out of favor with Poroshenko. Meanwhile, corruption investigations against pro-Russian politicians such as former Ukrainian Minister of Energy Yuriy Boyko, former Ukrainian parliamentarians Serhiy Kluyev and Yuriy Ivanyushchenko, and oligarch Rinat Akhmetov have been similarly stymied due to an immunity deal forged in 2014 between the latter three and the president.

At the helm of the PGO are two Poroshenko-appointed prosecutor generals, Vitaliy Yarema and Viktor Shokin. Both have been met with scathing criticism from Euromaidan activists and the Ukrainian branch of the anti-corruption watchdog group Transparency International for the lack of high-level criminal prosecutions coming from their office. Former United States Ambassador to Ukraine John Herbst has said, “It’s an absolute scandal that Mr. Shokin is the prosecutor general.” The current U.S. ambassador, Geoffrey R. Pyatt, has accused the PGO of undermining reforms, protecting corrupt prosecutors, and blocking criminal investigations. The United States, Pyatt has said, “needs honest partners who are committed to the rule of law.” Pyatt has called upon the PGO to abandon its Soviet legacy of political control that permits the powerful “to get away with influence peddling and human rights abuses.”

Even outside of the PGO, government officials have done little to aid those who suffered and died during the Euromaidan. The PGO has presented weak criminal cases to Interpol for Yanukovych, as well as his officials and the oligarchs he supported. In fact, some have even been removed from the international wanted list for their suspected involvement in Yanukovych-era crimes.

Reforms on paper and the creation of new institutions will not satisfy Ukraine’s widespread hunger for justice, dignity, and humanity after the atrocities following the Euromaidan and the nation’s costly war with Russian-backed separatist proxies. The Ukrainian population would be more willing to share the burdens of painful economic, social, and fiscal reforms if they saw justice being served, and that real reforms had taken place under Poroshenko’s watch. In the absence of presidential political will to change Ukraine’s deep seated corruption, Ukrainians are increasingly taking matters into their own hands by reactivating Euromaidan protests, this time outside Poroshenko’s grand palace. Protesters are creating new political forces aimed at challenging the president at the polls. With massive disillusionment and radicalization growing, Ukrainian sociologist Iryna Bekeshkina has warned that Ukraine needs “radical transformations.” If these reforms do not happen, Poroshenko could be overthrown in a country that is now awash with weapons and more tolerant of political violence. 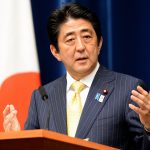