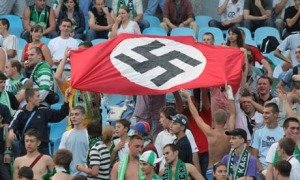 Nazi flag during a football match between Dynamo Kyiv and Karpaty in Kiev, photo by Ukrinform-AP

Euro 2012 was supposed to be an unalloyed celebration of not just football, but also the renaissance of Poland and Ukraine, the two nations that suffered most in the conflict between the twin poles of 20th-century totalitarianism: Nazism and Soviet communism.

But a darkness still pervades both countries. On a recent visit to Poland and Ukraine, I couldn’t help but be struck by it. In Warsaw, which I had visited briefly 17 years ago, I was amazed at how much the past drapes itself around the city’s prosperous facade.

There are massive, agonised monuments everywhere: to the dead of the Warsaw Uprising, to the fallen and murdered in the east, the martyrs of Katyn. Every step a tourist takes seems to be guiding him on a tour of Polish suffering.

In Lviv in western Ukraine, a place I had never visited before, I found the darkness in people’s souls. The city survived the worst of the war. Its perfectly preserved medieval heart is wrapped in a ribbon of Austro-Hungarian imperial boulevards and architecture.

But conversation after conversation with people from all walks of life reveal them looking backwards into the bleak times. Perhaps that’s to be expected given the catastrophic destruction visited on the two countries, but it has led many to a world-view that is a perversion of the golden rule: do unto others as others have done unto you.

It is most visible in the culture surrounding football. Racism, xenophobia, Jew hatred, all manifest themselves at the footie. Why this hatred should be so strong has social historians grasping for answers.

Jan Olaszek, of Poland’s Institute of National Remembrance, says: “People don’t know history. They know stereotypes.” This is what lies behind one of the strangest phenomena of contemporary Polish life, what Olaszek calls “antisemitism without Jews”.

Poland was the centre of the Holocaust. There are virtually no Jews left in the country, yet antisemitism persists. This is what Olaszek means by stereotypes. “Some Poles think all Jews were communists.”

Zhid kommune, Jew communist, is still a common epithet in Poland. It is a synonym for the Soviet era. But there is the old stereotype as well and that’s the one on display at football stadiums. There, Jew is a term of abuse, a way of telling the other team’s supporters you aren’t really Polish, you are something else, something less than human.

The ugliness is tolerated. In Rzeszow last year a huge banner reading “Death to the hook-nosed ones”, illustrated by a grotesque caricature of a bearded Jewish man with a long, crooked nose wearing a yarmulke, was unfurled.

“There were no Jews in that stadium,” says anti-racist campaigner Rafal Pankowski, editor of the Polish magazine Never Again. “Neither the club stewards nor the police asked the fans to take the sign down. In the case of the stewards it might be insensitivity – this is how fans act everywhere, what’s the big deal?”

In the case of police, Pankowski points out there were grounds to remove the banner and arrest those who had unfurled it. “Antisemitic expression is against the law in Poland.”

But the police, too, might not have seen that there was anything wrong. A banner like that is seen as normal.

The same kind of ugliness exists over the border in Ukraine, where fans abuse one another by calling each other Jews. But in Ukraine, at least, people who want to extrapolate what is happening in society from fan behaviour may be making a mistake.

“The focus on football is misplaced,” says Danylo Mokrik, a liberal journalist from Lviv. “The problems in Ukrainian society run at a deeper level.”

Mokrik condemns last week’s BBC Panorama report detailing widespread racism as sensationalist. “Here in Lviv violent racial ‘hate crimes’ are almost non-existent. Anyone of any colour can come to the tournament in safety.” The real story in Ukraine, in Mokrik’s view, is about Yulia Tymoshenko, which underscores the problems at the top of Ukrainian politics.

Tymoshenko, the former prime minister, is in jail, convicted of “abuse of office”. International leaders and human rights groups are unanimous: the charges were trumped up and the nationalist politician should be released.

In Lviv, I stopped at the Halitsky market, where I met two women named Luba. Recent history was evident in their smiles. Metallic Soviet-era teeth shone when they laughed. One Luba was selling root vegetables from her garden, the other was selling homemade cheese. Both were topping up their pensions and helping support their grown children.

“They went to university and technical school, but still there are no jobs for them,” one Luba said. “Politicians have been doing it for themselves. They are corrupt,” said the other.

The statistics bear them out. Research published last week by the Friedrich Ebert Stiftung, a German-funded thinktank in Kiev, noted that, in 2011, Ukraine’s GDP grew by 5.2%. This year that is projected to slow down to 3.5% because Ukraine, like the UK, trades primarily with the EU.

Those strong GDP figures, however, have not translated, according to the report into “real-term benefits for the people” and “did not generate jobs or fill the budget with resources”.

The Lubas know who is to blame. “The country is still run by Russians. The president is Russian, the prime minister is Russian.” So who do they support politically? “Yulia,” is their answer.

But with their preferred nationalist choice in prison they are shifting their support to the ultra-nationalist political party, Svoboda.

Svoboda is a morbid symptom. While some kind of new European idea of nationhood is waiting to be born, Svoboda adheres to an older, catastrophically failed notion of blood-and-soil nationalism. It is also the fastest-growing political party in western Ukraine.

The party’s followers honour the veterans of the Waffen-SS’s local Halychyna brigade, formed in 1943 to fight the Soviets. They also pay tribute to the OUN and OUP, militias that carried out a campaign of ethnic cleansing against the region’s Polish population during the war that makes the events in Bosnia seem almost tame: disembowelling of Catholic priests, villagers rounded up into barns and churches that were then set on fire.

How much overlap there was between the militiamen and the SS units is a subject of dispute, as is the overlap with earlier groups that helped the Nazis murder more than 95% of the region’s Jews – more than 200,000 people – a task that was essentially completed in just 18 months from the beginning of Operation Barbarossa in June 1941 until January 1943.

Svoboda’s leaders admire proto-Nazis such as Ernst Jünger, and are “understanding” of Goebbels. They speak of “purity of blood” and Ukraine as “one race, one nation, one fatherland”.

“We are against diversity,” says Yuri Michalchyshyn, the party’s media-savvy young propagandist. “Ukraine is for Ukrainians.” But the truth is Ukraine as a pure-blooded nation-state is more an idea than a historical fact.

For more than half a millennium the western part of the country around Lviv was called Galicia and was ruled either by Poland or Austria-Hungary.

At the time of the Nazi invasion it was one of the most diverse places in Europe. Lviv was about 55% Polish, a little over 30% Jewish and about 12% Ukrainian. There were also Tatars and Russians living in the area. Today it is 90% Ukrainian.

The intolerant Svoboda ideology has been elevated only because of the ineptitude and corruption of Ukraine’s post-Soviet political establishment.

“If democratic parties were effective, no one would vote for Svoboda,” says the vice-rector of the Catholic University of Ukraine, Myroslav Marynovych, who spent 10 years in the Soviet gulag for nationalist activities.

If there were effective politics in Ukraine, Svoboda might be reduced to its core: elderly supporters of the SS group and the members of the Ultras, comprising Karpaty Lviv football fans. Its high-quality videos on YouTube are pretty hair-raising, as are the comments underneath them endorsing their racist sentiments, which come from all over western Europe, such as this one: “Keep up the good work otherwise your country will be lost forever im from england [sic]… kateithesinger123.”

But for the moment effective politics in Ukraine does not exist, so the racist mentality is taking hold among the younger generation.

The ugly xenophobia is keeping fans from outside Poland and Ukraine away from Euro 2012, but anti-racist campaigner Pankowski sees the tournament as a “historic event. It is forcing people to have a positive confrontation with multiculturalism.”

For the first time in Poland, Pankowski claims, there is a national debate on what multiculturalism means. “We have to make sure it is not a debate just for June, but that it carries on.”

Michael Goldfarb is an author, journalist and broadcaster