KIEV, Ukraine—Leaders of the European Union and Ukraine made little headway here on Monday in easing strains between them, despite common ground in opposing Russia’s intervention in the east of the country. After their first formal summit since Russia annexed Crimea in eastern Ukraine a year ago, the EU played down prospects for a peacekeeping operation here, while Ukrainian President Petro Poroshenko defended the pace of his government’s economic overhauls and anticorruption drive.

Read further below: Interview with Matthew Dal Santo of the Danish Research Council, on RT.com.

European Council President Donald Tusk said the bloc would soon send a team to assess “the needs and possibilities” for an EU mission. However, any such operation must be purely civilian, he said, warning that a military component was currently impossible. 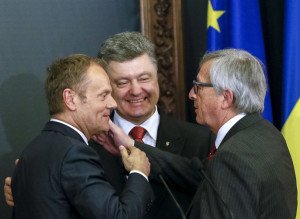 Since the signing of a fragile cease-fire agreement in the Belarus city of Minsk on Feb. 12 between Kiev and Russian-backed rebels in the country’s east, Ukraine has been urging the EU and other Western countries to form a mission to bolster the peace process.

EU officials have said they could envisage some kind of border advisory mission. The bloc already has one operation advising the Ukrainians on judicial and security changes. However, they note that the Minsk accord handed the role of monitoring the cease-fire to the Organization for Security and Cooperation in Europe, a group that includes Russia and Ukraine as members.

“We know the expectations of the Ukrainian side on the issues,” Mr. Tusk said. “It will not be easy but we will look into it.”

European officials were focused on pushing Ukraine to fix its ailing economy.

EU officials acknowledged Ukraine has advanced a number of initiatives in recent weeks, including appointing the head of an anticorruption task force, giving local governments more control over budgets and other powers, and liberalizing the energy sector. But they said much more needs doing.

Mr. Poroshenko bristled at suggestions his administration was too slow. “In current conditions we just ask for one thing: fair assessment of the Ukraine’s team actions,” he said at a news conference. “The notion that Ukraine is lagging behind with the reforms isn’t necessarily fair and not necessarily true.”

A year into a grinding standoff with Russia over Ukraine, EU and Ukrainian diplomats have acknowledged a widening set of differences.

Moscow has reveled in the strains. Alexei Pushkov, chairman of the International Affairs Committee in Russia’s State Duma, said on radio on Monday that the Kiev summit would produce “a rather tough conversation…because the EU has started to get tired of Ukraine.”

Monday’s summit came against the backdrop of fresh fighting. Violence had subsided across most of the front line, but OSCE monitors reported late Sunday they had witnessed some of the heaviest shelling since February around Shyrokyne, a town on the outskirts of Mariupol, the largest city in the region [of Donetsk] still under Kiev’s control.

The OSCE mission reported 69 shots fired from tanks, as well as hundreds of mortar rounds fired. Heavy incoming artillery fire from separatist lines landed about 300 meters (330 yards) from the OSCE monitoring post, forcing the monitors to relocate. The OSCE said it saw rebel tanks and other armored vehicles massing in the area.

The EU and Kiev sounded a joint note on the violence. European Commission President Jean-Claude Juncker said all sides must fully implement the Minsk agreement, which he said “doesn’t foresee stepping up of Russian aggression.”

There was also agreement Monday on fully implementing a trade agreement by January. Russia has fiercely opposed the pact, which it says would harm its economic ties to Ukraine. In September, the EU allowed Ukraine to delay enacting key parts of the accord.

Mr. Juncker also announced €70 million ($76 million) of additional assistance as part of a long-standing program to clean up the area around the Chernobyl nuclear site. And Mr. Poroshenko thanked the EU for agreeing to a new €1.8 billion balance of payments loan. The EU said it hoped the first tranche of that would be paid in the summer.

Mr. Poroshenko also renewed his call for the EU to consider Ukraine for eventual membership. Asked to respond, Mr. Juncker said the question of a Ukrainian membership bid wouldn’t be on the table for the foreseeable future.

Meanwhile, Mr. Poroshenko’s call for quick progress on visa-free travel for Ukrainians to the EU appeared to receive short thrift. Ukrainian diplomats say the EU is blocking progress because of concerns that Russia’s control of Ukraine’s eastern borders would produce a wave of uncontrolled migration.

Brussels says Kiev hasn’t done its homework. A senior EU official said Mr. Juncker handed Mr. Poroshenko a one-page summary of tasks Kiev must implement for the talks to succeed. They include completing the rollout of biometric passports, measures to strengthen border security and steps to prevent and fight organized crime and money laundering.

During the EU-Ukraine summit in Kiev on April 27, President Poroshenko said he hoped his country would be able to apply for EU membership within five years. However, the President of the European Commission Jean-Claude Juncker said the EU has enough of their own problems to solve at the moment.

The EU will be very hesitant before having more obligations towards Kiev because of the ongoing war in Donbass and because of the Euro crisis and other problems within the bloc, says Matthew Dal Santo of the Danish Research Council.

RT: Building a closer relationship with Europe was one of the main aims of the Maidan revolution. Judging by today’s summit, has that been achieved?

Matthew Dal Santo: First of all there is no doubt that Ukraine does have a closer relationship with Europe than it did have in November, 2013. The Association Agreement has now been signed, so formally, yes, on paper there is a closer relationship between Ukraine and Brussels now than has [ever] historically been.

RT: President Poroshenko is optimistic about these closer ties you’ve just mentioned. He wants Ukraine to apply for EU membership in five years’ time. But EU leaders don’t seem to share this optimism. Is it still a distant prospect?

MDS: I think that is a distant prospect. I think that President Tusk was correct when he said that the EU has enough on its plate at the moment and I think that is certainly true. The EU would be very hesitant before constructing any more obligations with Kiev, not just in a light of the ongoing war in Eastern Ukraine–that is obviously a primary preoccupation–but also in view of the other problems that the EU has – the Euro crisis, etc. that occupy a lot of European time.

RT: Ukraine is clearly a political hot potato for the EU leaders. Can you see a time when it will be possible for Ukraine to enter the EU?

MDS: I think to some extent that is the heart of the conflict. I’m not sure that it was ever necessarily the EU’s intention to offer Ukraine membership. That was always a possibility but it has never been formally extended. Certainly Russia seems to remain as opposed now to Ukrainian membership in the EU as it has been for the past 18 months. I don’t think that is going to be an easy equation to stop.

RT: Ukraine also wants a visa-free regime with the EU, but no progress was reached on that front either at the summit. So are there any positives at all that Ukraine can take from the talks?

MDS: The fact that [the summit] occurred at all, simply having the President of the European Council, the head of European Commission in Kiev, it’s a strong symbolic statement of support for the government in Kiev. In terms of anything more concrete, I don’t think that it is, there is a lot to point to.

RT: Brussels has been resisting Kiev’s request for an international peacekeeping mission in East Ukraine. Why do you think that is?

MDS: It is difficult to imagine a situation whereby you could safely send in European soldiers – and that is what the peacekeepers are, they are soldiers – into what is still in all intents and purposes a war zone. It would be very easy for any kind of mistake or miscalculation to escalate into something much nastier between any European peacekeepers involved and potentially Russian forces…First of all they need to have peace to [send] in peacekeepers, and there is no peace yet.

When did we all become murderers?Background, Ukraine 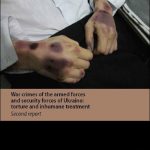