BRUSSELS – Turkish authorities have extended their crackdown on media and, in one case, indicted a financial analyst for writing a critical report on the post-coup investment climate. The government said on July 28 that it would shut down three news agencies, 16 TV channels, 23 radio stations, 45 newspapers and 15 magazines. 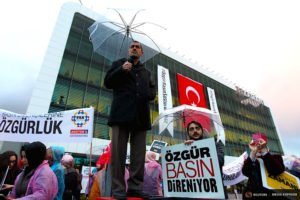 Protest in March 2016 outside of Zaman newspaper, Turkey’s largest, after the gov’t seized it and turned it into a gov’t mouthpiece (Reuters)

It also issued arrest warrants for 47 journalists and media executives, most of whom used to work for the government-critical Zaman newspaper, which had been seized by authorities in March prior to the failed coup earlier this month, or for the Feza Media Group that owned Zaman.

State media reported that 12 of the people on the new list had been placed under arrest already.

A government official, who asked not to be named, told the AFP news agency that “prominent employees of Zaman are likely to have intimate knowledge of the Gulen network and as such could benefit the investigation”, referring to Fethullah Gulen, an Islamic teacher who lives in the U.S. and whom Turkey has accused of masterminding the failed overthrow of president Recep Tayyip Erdogan.

Prosecutors had already issued warrants for the arrest of 42 journalists, 16 of whom were reportedly in custody by Wednesday.

A contact at one Brussels-based pro-Gulen NGO, who asked not to be named, told EU Observer that one suspect, a solicitor who also ran a local newspaper and a civil rights NGO in the Hatay province, had fled the country. He said the police reacted by shutting down the newspaper, the NGO and his law firm and by arresting his 86-year-old mother-in-law.

“Relatives of the detainees are getting worried for their safety as they are not allowed to see them,” the Brussels-based contact said.

In another case, authorities revoked the licence of Mert Ulker, the head of research at Ak Investment, a leading brokerage firm in Turkey, on grounds that he had failed to “fulfil his responsibilities”. They also charged him with insulting the president and the state. He had written a report analysing how the events might affect the business climate.

The developments have been condemned by international NGOs, including the London-based Amnesty International and the Washington-based Committee to Protect Journalists.

Financial analysts also told the Bloomberg newswire that Ulker’s fate meant any financial analysis coming out of Turkey would be tainted by fears of self-censorship.

The media purge is part of a much wider crackdown that has seen 10,000 people detained and more than 45,000 lose their jobs.

According to Amnesty International police have been holding some detainees in stress positions for periods of up to 48 hours to extract confessions. “Detainees have been denied food, water and medical treatment, and verbally abused and threatened. Some have been subjected to severe beatings and torture, including rape”, the NGO said.

The EU statement was softer in its criticism of Erdogan’s security measures than previous EU comments, saying only that she had underlined “the expectations of the EU as to the compliance by Turkish authorities to the highest standards of the rule of law and fundamental rights and freedoms”.

The U.S. has also taken a soft line on Turkey, which it considers a strategic ally in terms of projecting influence in the Middle East. Reacting to the media crackdown on Wednesday, State Department spokesman John Kirby said, “We obviously support bringing the perpetrators of the coup to justice and we also continue to stress the importance of upholding democratic principles and the rule of law through the process”.

He added that the U.S. understood “the need for them to be able to get their arms around this failed coup and to hold the perpetrators to account”. 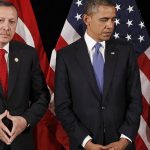 The U.S. almost certainly was not involved in the Turkish coupTurkey / Türkiye 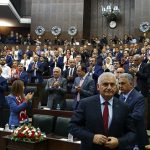 The AKP’s path to the coupTurkey / Türkiye