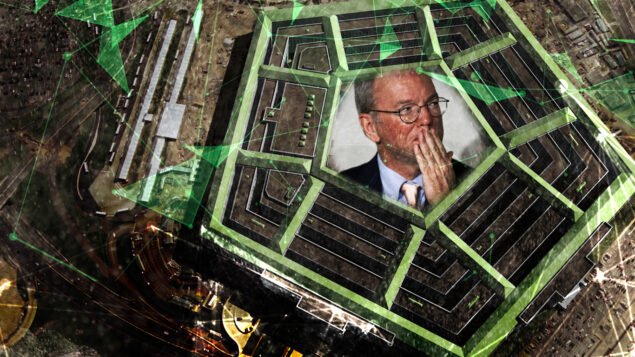 As the Pentagon drives a hi-tech arms race to maintain its global military superiority, ex-Google CEO Eric Schmidt is the man at the center. Behind The Headlines’ Dan Cohen investigates how the U.S. empire’s drive to control the world using Silicon Valley technology creates the possibility of a devastating war.

MOUNTAIN VIEW, CALIFORNIA — The United States is leading a new artificial intelligence arms race that could spell the end of humanity.

Back in 2014, a few years before he died, Stephen Hawking warned us about artificial intelligence:

Today, artificial intelligence, or AI, is the centerpiece of the U.S. empire’s plan to maintain global dominance.

AI is essentially computer super-intelligence that does what human brains can not. Exponential technological advances have rendered our human brains, constrained by the slow process of biological evolution, inferior to modern supercomputers.

The focus on artificial intelligence is part of what is known as the Third Offset, a strategy that seeks to offset advances in military technology by Russia and China in order to maintain U.S. global military superiority, thus ensuring no country can challenge U.S. imperialism.

The Third Offset is the latest iteration of the strategy the U.S. used to dominate the globe throughout the Cold War. A few years after World War II, Washington implemented The First Offset strategy and developed a massive nuclear arsenal. This sparked an arms race with the Soviet Union that nearly led to all-out nuclear war.

The Second Offset began in the 1970s when the Soviet Union had achieved parity in nuclear weapons. The U.S. began developing an arsenal of long-range, precision-guided bombs and stealth technology.

Now Russia and China have caught up to the U.S. in conventional military might. So in 2014,  soon after the Obama Administration’s Pivot To Asia began, the U.S. announced the formation of the Third Offset strategy.

“Today I’m announcing a new Defense Innovation Initiative – an initiative that we expect to develop into a game-changing third ‘offset’ strategy,” then-Secretary of Defense Chuck Hagel remarked. “This new initiative is an ambitious department-wide effort to identify and invest in innovative ways to sustain and advance America’s military dominance for the 21st century.” Hagel’s speech included the announcement of a Pentagon office in Silicon Valley, called the Defense Innovation Unit. This has since expanded to have offices in military technology hubs in Austin, Texas and Boston, and at the Pentagon itself.

In April 2015, Hagel’s replacement, Ash Carter, gave a landmark speech to Silicon Valley CEOs at Stanford University, urging them to enlist in the new arms race. “This is a serious matter,” Carter explained. “And it requires our collaboration. But in addition to dangers, there are also really great opportunities to be seized through a new level of partnership between the Pentagon and Silicon Valley – opportunities that we can only realize together.” Carter gently reminded his audience that the Silicon Valley giants owe their existence to the Pentagon and CIA:

Consider the historic role that DoD and government investments have played in helping spur ground-up technology innovation – both in this Valley, and on this campus… [M]ost technologies used throughout Silicon Valley – including many that Apple brilliantly integrated into the iPhone – can be traced back to government or DoD research and expenditures. The developers of multi-touch worked together through a fellowship funded by the National Science Foundation and the CIA…

The government helped ignite the spark, but this was the place that nurtured the flame that created incredible applications. I mention this because it speaks to a partnership that has long existed between America’s technology sector and its government and defense institutions,… a relationship that can continue in a way that benefits us both.”

The key Silicon Valley figure merging the Pentagon and the Valley is former Google CEO Eric Schmidt. As soon as the Pivot to Asia began, Schmidt was meeting with Pentagon officials.

In 2016, he was named head of the newly formed Defense Innovation Board to advise the Pentagon. Schmidt toured some hundred U.S. military bases and installations, advising them on how to use technology to increase their lethality. He went to a U.S. base in Qatar to advise the military on how to more efficiently run tankers that refuel warplanes for bombing runs in Iraq and Yemen.

The Third Offset Strategy and AI arms race continued through the Trump era, its principles delineated in the 2018 National Defense Strategy that officially announced the end of the so-called “war on terror” and return to Cold-War politics, euphemistically termed “inter-state strategic competition.”

In today’s era of great-power competition, as new technologies alter the character of warfare, we must stay ahead of our near peer rivals, namely Russia and China… [A]rtificial intelligence is in a league of its own, with the potential to transform nearly every aspect of the battlefield, from the back office to the front lines.

Schmidt was then appointed to head the National Security Commission on Artificial Intelligence  (NSCAI) — a body created to advise the government on AI development.

He preaches the orientalist trope that the U.S. is the torchbearer of democracy and that the rise of China is ushering in an alien form of technocratic authoritarianism contrary to American values. His answer is for the government to pour huge amounts of funding into technology.

Schmidt’s deputy at the NSCAI is Robert Work, a former top Pentagon official and author of the Third Offset Strategy’s foundational documents. In a rare and candid moment, Work once told a group of Air Force cadets that “The Department of Defense is one of the biggest corporations on the planet.”

The Pentagon is a corporation, therefore it’s goal is to generate profit — in its particular case, through war. And what better way to make money than ramping up fear of a foreign threat. Eric Schmidt has made common cause with Congresswoman Liz Cheney to do exactly that.

“Why don’t you lay out why the China threat is important,” Schmidt told Cheney during an August 2021 appearance at the Aspen Institute.

“They’ve been engaged in my view in a very methodical, very effective, very aggressive campaign effort against us for many years across every domain,” Cheney commented. “They need to recognize that our capabilities, our will are there to prevent them from using their military to take action against us.”

In the future, warfare will pit algorithm against algorithm. The sources of battlefield advantage will shift from traditional factors like force size and levels of armaments to factors like superior data collection and assimilation, connectivity, computing power, algorithms, and system security.

In other words, Schmidt and the Pentagon are seeking to create hyper-advanced connected systems of autonomous weapons that will make battlefield decisions at speeds exponentially faster than the human brain can understand. Hence, “victory” in war will be determined by which computer system dominates, regardless of the cost to human life.

The report also calls for AI to be used against “foreign and domestic terrorists operating within our borders.” This raises major concerns about further encroachment of the U.S. surveillance state.

Meanwhile, Schmidt is positioning himself to make hefty sums off of his ties.

According to a report in The Prospect, “[A]s a venture capitalist, Schmidt has invested millions of dollars in more than a half-dozen national-security startups that sell those very technologies back to the government.”

A video game with millions of real corpses?

Even though the U.S. military budget is already around three times greater than China’s, the AI arms race has been used to justify the largest Pentagon research and development budget in history. Biden’s DoD budget request for the year 2022 includes $112 billion for R&D -– up $5.5 billion from 2021.

It is a bipartisan effort that has spanned three administrations. But how dangerous is it really?

By distancing the human from conflict, the technology lowers not only the costs and risks associated with war, but the political bar to initiating hostilities as well. As a result, the deterrent quality desired in the Third Offset could actually increase the likelihood that the United States would use force and ultimately decrease global stability.

…The United States must pursue Third Offset capabilities with the understanding that our actions will drive and incentivize continued proliferation of nuclear weapons.

At least one person in the Obama State Department had some concern. At a 2017 panel with Eric Schmidt, an official in the audience asked him if he was concerned about igniting an artificial intelligence arms race:

Schmidt: Do you think there’s going to be an AI arms race?

State Department official: Well, you just said China is going to be ahead of us by 2020. Doesn’t that concern you?

Schmidt: It does. But that doesn’t necessarily mean it’s an arms race. Depends on how it’s done.

Schmidt: I said for commercial as well as defense purposes, which is what they’ve said publicly.

State Department official: So it doesn’t concern you at all?

Schmidt: It actually does but the reason I’m provoking you is that it’s so easy to go to the movie. You know the movie of the robot.

State Department official: Yeah, I’m not talking about the Terminator but, you know as you mentioned the example of nuclear weapons in the Forties. We might be at that stage in the next few years when it comes to AI.

Even more alarming, Georgetown University’s Center for Security and Emerging Technology ran a simulation in which the U.S. missile detection system’s reliance on AI leads to hot war, potentially with nuclear weapons. They created a scenario in which the detection system interprets unusual atmospheric conditions “as a series of missile launches, and the system fires interceptors in response.” Then: “As the interceptors reach the stratosphere, China’s early-warning radar picks them up. Believing they are under attack, Chinese commanders order a retaliatory strike.”

A technological glitch could spell disaster for humanity.

This is a remarkably similar scenario to the infamous 1983 incident when a Soviet warning system detected an incoming missile strike from the U.S. Soviet Lieutenant Colonel Stanislav Petrov believed the warning to be a false alarm and rejected firing nuclear weapons at the U.S. Thus, human intervention prevented nuclear war and saved millions of lives. In a system run by AI, the bombs would have launched.

With Eric Schmidt as a central figure of the Pentagon’s new AI arms race, the U.S. is preparing for a devastating war with China. While a hot war between the two superpowers seems unlikely for now, the creation of this technology in itself creates the possibility — a danger that must be stopped before it evolves to threaten humanity.

Dan Cohen is the Washington DC correspondent for Behind The Headlines. He has produced widely distributed video reports and print dispatches from across Israel-Palestine. He tweets at @DanCohen3000.