Erdogan under pressure over Turkey’s response to wildfires 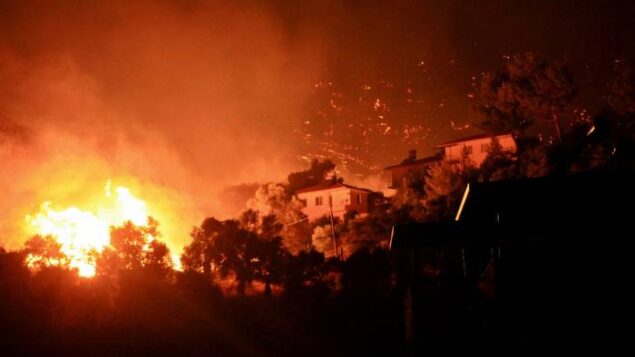 Wildfires take hold in Oren, near Milas, south-western Turkey. The blazes have been described as the country’s worst in half a century © AFP via Getty Images

As Turkish firefighters battle blazes across the Mediterranean coastline, President Recep Tayyip Erdogan has been criticised over his government’s response to what he called the worst fires in the nation’s history and has been mocked for gifts of tea to victims as critics say country is ill-prepared for climate disasters

As Turkish firefighters battle blazes across the Mediterranean coastline, President Recep Tayyip Erdogan has been criticised over his government’s response to what he called the worst fires in the nation’s history.

While all of Europe has experienced extreme weather this summer, from heavy flooding in the north to severe heatwaves and fires in parts of the Mediterranean, Turkey has been hit by its most intense blazes on record.

Eight people have died since the fires began last week, with hundreds of tourists evacuated as the flames spread across 40 provinces. Almost 300 fires had been extinguished by midday on Wednesday while 13 were still burning, according to a forestry official.

“This year’s fire is unlike any other in our history. This is the largest,” Erdogan said in a television interview. “On the eighth day of our operations, we are now confronted with a thermal power plant fire.”

The flames reached the coal-fired power station in Mugla province late on Wednesday, prompting soldiers to evacuate nearby homes amid sounds of explosions at the facility, according to news channels. Military landing ships reached the coast 20km away to move residents to safety, the defence ministry said on Twitter. 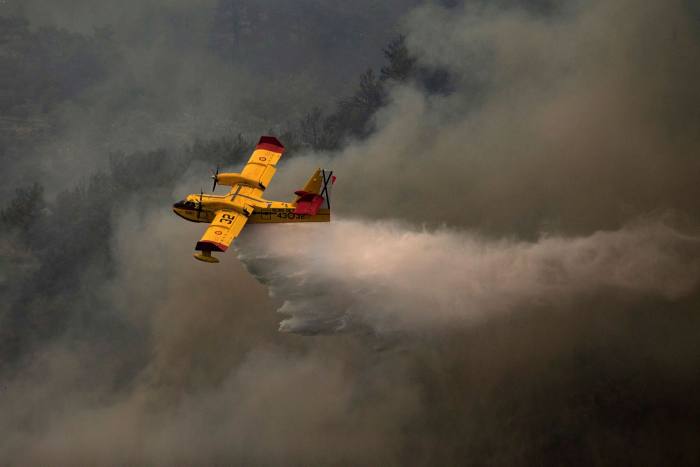 Although soaring temperatures, low humidity and winds gusting at 50km/h complicated the response, anger has mounted over an apparent failure to adequately prepare a country where summer forest fires are a perennial concern.

The absence of a functioning national fleet of firefighting aircraft forced Turkey to wait for specialised planes to arrive from other countries, including Spain, Ukraine and Russia. Ankara declined an offer of assistance from Greece because its planes had low water-load capacities, according to Bekir Pakdemirli, the forestry minister.

“I have not seen any planes. Due to the topography, it is almost impossible to intervene by land . . . so the fires run their course,” said Mehmet Oktay, an opposition party mayor in the resort town of Marmaris, where more than 13,000 hectares of nearby forest lay charred and half a dozen fires continued to burn. “We are clearly not prepared if we suffered this kind of loss.”

Marmaris and other areas hit by the fires are among Turkey’s most important destinations for a tourism industry already battered by coronavirus travel curbs.

Scientists say Turkey’s fires are part of a chain of extreme weather events caused by a changing climate; this summer, blazes have also raged in Italy and Greece. Even Finland, where temperatures hit a record high in July, has suffered its worst forest fire in half a century. Yet Turkey is the only G20 nation to refuse to ratify the Paris agreement on climate change.

“The failure to ratify the climate change accords is part of the government’s regard for the environment as something to be exploited, rather than protected,” said Saruhan Oluc, a lawmaker in parliament’s second-biggest opposition group, the People’s Democratic party. “A lack of preparation, including having aircraft, and negligence is to blame for the scale of this disaster.”

The emergency adds to voter discontent with Erdogan’s Justice and Development party (AKP), whose support in opinion polls has fallen to record lows over its handling of an economy plagued by high unemployment and inflation stuck in the double digits for most of the past four years. “There’s a sense among Turks that the government is failing in its function to deliver a better standard of living across the board. The polls show there’s a majority who believe that in the near future things will get worse,” said Sinan Ulgen, a visiting scholar at Carnegie Europe. 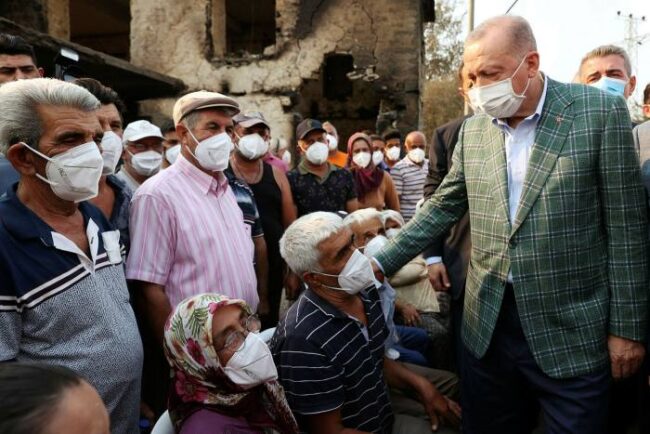 President Recep Tayyip Erdogan talks to residents of Manavgat, Antalya, which has been hit by wildfires. He has attracted criticism for his response to the emergency © Turkish Presidency via AP

Erdogan travelled to some of the worst-hit areas at the weekend, expressing sorrow for the loss of life and promising to “dress the wounds of our citizens”. Crowds applauded him. But some of his attempts to console victims were met with derision. In Marmaris, he tossed bags of free tea from his moving bus — a week after he gave handouts of tea to residents of a Black Sea community struck by deadly floods.

Hip-hop artist Sehinsah mocked the gesture, telling a concert audience he had a “surprise” for them before hurling tea, according to a video. Another video circulating on social media showed a woman throwing boxes of tea at unsuspecting pedestrians and asking “Are you happy now?” A play on the ruling party’s initials, “AKParTea” trended on Twitter.

The spoofs are all the more striking because criticism of Erdogan is heavily policed, with prosecutors last year opening cases against almost 10,000 people for insulting the president, a crime in Turkey. “People found this idea of throwing tea as odd [when] in previous years, this government was savvy about the pulse of the population. Now they seem to have lost that touch,” said Ulgen.

Erdogan’s communications chief, Fahrettin Altun, dismissed information shared on social media as “fake news” and said that Turkey would compensate people for the loss of property. “We are continuing our fight against forest fires by mobilising all means of the state,” he said on Twitter. 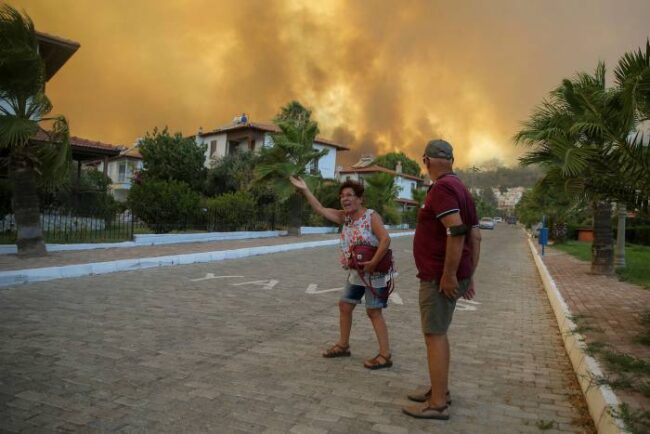 An anguished woman surveys the scene in Oren © Emre Tazegul/AP

Even pledges to rebuild hundreds of destroyed or damaged homes have hit the wrong note.

The state housing authority posted on Twitter mock-ups of new village houses as the conflagration engulfed villages last week. Mehmet Ozeren, the AKP mayor of the hard-hit district of Gundogmus, said this week those who lost homes they owned would now enjoy low interest-rate loans from the housing agency. “It may be wrong to say this, but I think people with very old houses will say, ‘If only our homes had burnt too’,” he told a reporter.

“Trust in the government is declining as people see problems cannot be managed,” said Bekir Agirdir, who runs the polling agency KONDA Research. “Turkey remains polarised over culture and identity but the problems of everyday life are so burdensome — the pandemic, unemployment, inflation, floods, fires — the feeling this government cannot solve these issues is strengthening.”