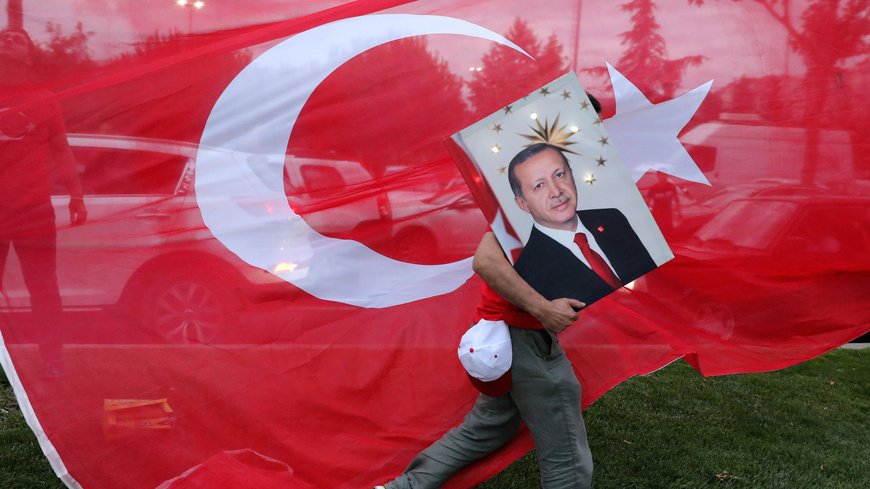 A supporters of Turkish President Tayyip Erdogan holds his picture in front of a Turkish flag, in front of Turkey’s ruling AK Party (AKP) headquarters in Istanbul,Turkey, June 24, 2018. REUTERS/Goran Tomasevic TPX IMAGES OF THE DAY – RC1D72DCC500

What was the outcome of the Turkish election? On the face of it, a win for Erdogan and a mandate to serve as President with enhanced powers. But beneath the surface, things are far from cut and dried. Turkey’s constitutional crisis is not over: it is just beginning.

The playing field was less than level, with state of emergency rule in force, and a generally subservient mass media in the service of the ruling party. The results of Turkey’s presidential and parliamentary elections held June 24 have, nevertheless, vindicated incumbent President Recep Tayyip Erdogan. Having garnered 52.5% of the vote, thus avoiding a runoff, Erdogan will now serve as Turkey’s first executive president, with enhanced powers and few encumbrances from parliament, thanks to constitutional changes adopted in April 2017.Erdogan’s victory put him nearly 22% points ahead of Muharrem Ince, the social democratic runner-up, who got 30.7% of the presidential vote, while his party, the main opposition Republican People’s Part (CHP), managed to garner only 22.6% of the parliamentary vote. Given the margin, many wonder whether the results favoring Erdogan would have changed substantially had conditions been fairer.Ince himself conceded defeat to Erdogan without making a fuss over the circumstances under which the elections were held. “If you have lost, you have lost,” Ince said in an address after the results became clear. “To say, I don’t accept this result, so let’s take to the streets is not democracy.”

The large turnout, reported at around 83-85% — the official figure has yet to be announced — also lends credence to those who argue that Erdogan would have won anyway. Not everything, however, went the way Erdogan would have desired.

The incumbent’s heart was set on winning at least 55% of the vote, and preferably much higher, to add credence to his contention that he will be the president of the entire nation. This is a crucial point because under the constitutional changes now in force, Turkey will have a president who is also the leader of a political party with ideological leanings. Previously the president had to abandon any party allegiance to represent the nation.

Erdogan was also hoping for a decisive majority in parliament for his Justice and Development Party (AKP) to have full control as he unfolds his political, economic and social agenda over the next five years. Although the parliament has now lost most of its power, it still has some control over the purse strings, and its endorsement of legislation proposed by Erdogan is still required.

The AKP got 42.5% of the vote and will hold 295 seats, but it has lost its parliamentary majority. For the first time in its 16 years of uninterrupted rule, the AKP will have to enter into a coalition, with the far-right Nationalist Action Party (MHP), with which it formed an alliance for the elections. The alliance proved to be an astute move, because it not only increased Erdogan’s vote, but also ensured that its coalition will have a parliamentary majority, even if short of the number required to introduce constitutional changes.

It is generally agreed that the MHP is the real winner in these elections, having largely been written off before the balloting. There was widespread speculation that the MHP had lost much of its grass-roots support to the Good Party (IYI), which includes former MHP deputies disgruntled by the backing their party was giving Erdogan.

Many said the MHP had entered into an alliance with the AKP, under the banner of the Republic Alliance, to avoid falling short of the 10% of the vote needed to enter parliament. Running on a joint ticket with the AKP made this barrage irrelevant.

The MHP, however, ended up garnering 11.1% of the parliamentary vote on its own, for 48 seats, thus becoming Erdogan’s and the AKP’s kingmaker. This result also empowered MHP leader Devlet Bahceli, who is vowing to continue to support Erdogan but also underlining that the MHP has become the key party in parliament, which will provide the checks and balances to Erdogan’s rule.

The IYI, which entered into an alliance with the CHP under the banner of the Nation Alliance, also met the 10% threshold on its own merit, to seat 43 deputies in parliament. For a party founded only nine months ago, it did better than expected in the parliamentary balloting, although its presidential candidate, Meral Aksener, also party leader, attracted a disappointing 7.3% of the presidential vote.

Another winner in the parliamentary elections was the pro-Kurdish Peoples’ Democratic Party (HDP) which, despite all the legal and political obstacles thrown at it, including its presidential candidate, Selahattin Demirtas, being in prison on terrorism charges, got 11.7% of the vote, or 67 seats. The HDP was the only party that had to surpass the electoral threshold on its own to get into parliament. Another one of the ironies of these elections, however, was that Demirtas only got 8.4% of the presidential vote despite his party’s strong performance.

So what does all this mean for Turkey, and its relations with the outside world?

The first thing of note is that the results are a combined victory for Erdogan’s brand of political Islam and the ultra-nationalism of the MHP. This does not portend well for Western-style liberal democracy in Turkey or for Ankara’s capacity to resolve its Kurdish problem, let alone unifying the strongly divided Turks.

Erdogan’s outlook is based on a majoritarian understanding of democracy, which means that the potential for him to become even more authoritarian, now that he is armed with what he believes to be the “will of the people,” has increased. Meanwhile, ultranationalist concerns have always trumped democratic principles, human rights and minority rights for the MHP’s Bahceli, who is expected to become Erdogan’s vice president.

Nagehan Alci, a long-time Erdogan devotee who writes for Haber Turk, believes that claims by the opposition about Erdogan not being able to excite the public anymore had driven many to the ballot box. “Despite some criticism aimed at the AKP, some of these voters clearly did not want a Turkey without Erdogan,” Alci wrote in her column.

The MHP is vehemently anti-Western by orientation, which fits in with the leanings of Erdogan and the AKP. This, many believe, will make improvement in Turkey’s strained ties with West more difficult. Ankara’s already stalled EU accession process is unlikely to make any headway under these circumstances, given the deep antipathy felt for Erdogan in Europe. Meanwhile, it is expected that Ankara will continue to consolidate ties with Moscow and other anti-Western countries.

There is also the counterargument being put forward by some that this electoral victory will actually free Erdogan’s hands, enabling him to take bold steps in order to improve ties with Europe and the United States. “His strong mandate will enable him to take steps that he might not otherwise have taken because of concerns about losing support,” a Western diplomat asserted, speaking to Al-Monitor on the condition of anonymity due to his sensitive position.

This overlooks, however, that Erdogan is now allied with the far right, whose own star shined bright in the elections. Bahceli’s post-election remarks indicate that the MHP might not be as pliant as Erdogan would like. The MHP is highly unlikely to use its newfound power in favor of the liberal democratic policies the West wants Turkey to introduce.

Although Erdogan has won, he still has his work cut out for him. Hasan Cemal, one of Turkey’s leading journalists, argues that Erdogan will only deepen Turkey’s problems. “Turkey under Erdogan will continue to be a country with increasing problems, rather than a country that solves problems,” Cemal wrote in his column for the news portal T24.

The bottom line is that Turkey’s turn toward a mixture of political Islam and ultra-nationalism is unlikely to produce the cures for the country’s mounting ailments that many Erdogan supporters expect, especially with regard to the faltering economy.