Demonstrators wearing face masks to prevent the spread of the coronavirus disease (COVID-19) take part in a rally ahead of the International Women’s Day in Istanbul, Turkey March 6, 2021.

President Recep Tayyip Erdoğan ignored the constant murder of women in Turkey by men, and instead portrayed women as mothers and pillars of the family in a March 8 International Women’s Day message. Accompanying his message was a rosy pink picture, displaying cherry blossoms on a soft pink background with graphics that read “Happy International Women’s Day.”

President Recep Tayyip Erdoğan released a celebratory message for March 8 International Women’s Day that was insensitive to the state of women in Turkey, as the president reinforced painfully stereotypical gender roles while the country remains plagued by violence against women, and impunity of said crimes.

“I congratulate the March 8 International Women’s Day of all our women who are the hope of our humanity with their love, labor and sacrifice. We will continue our efforts with determination and sensitivity to establish an environment where our women are not subjected to violence,” Erdoğan said in a tweet on March 8. 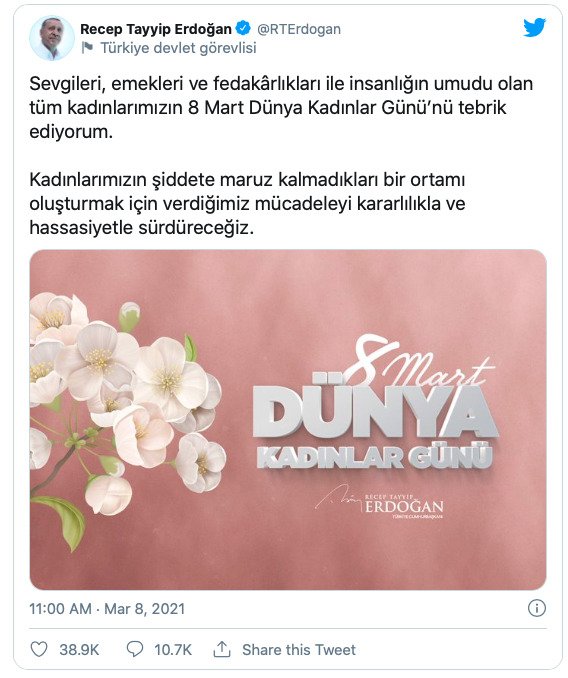 Accompanying his message was a rosy pink picture, displaying cherry blossoms on a soft pink background with graphics that read “Happy International Women’s Day” and the president’s name and signature.

In an official statement marking March 8, the president said that he “really cares about” women’s participation in all areas of life, as they are the pillars of the constructs of family and society.

“We’ve established advanced legal and administrative reforms to resolve the issues our women face in family, education, work and society, the most crucial of which are discrimination, rights violations and violence,” the president said.

The president harshly condemned “all forms of physical and emotional violence and discrimination” which he said he views as a crime of humanity.

Seemingly well-intended, the president’s comments are an underestimation of the experiences and collective trauma of women in Turkey, as a shocking 6,732 women were slaughtered by men in the past 18 years that the ruling Justice and Development Party (AKP) has been in power.

“We will continue to stand against all efforts and rhetoric that aims to dismantle our institution of family, and to protect the sanctity of the family union, with the male and female as one whole,” the president said.

The painfully stereotypical gender role of the woman as a mother is a favorite among the AKP and is also one of the bases behind the government’s rejection of the Istanbul Convention, an international document that protects women and children in Turkey from violence and rights violations.

The AKP debated withdrawing from the convention over the summer of 2020, prompting nationwide outrage, including from within their own ranks, although some conservative opinion leaders slammed the document for glorifying homosexuality by protecting the rights of “all genders.”

“Happy ‘March 8 Women’s Day’ to all our strong women who beautify what they touch, inspire our women with their success stories, and are the hope of our future,” Presidential Communications Director Fahrettin Altun ineloquently said in yet another message that seemed overlooked women’s suffering.

İmamoğlu tagged the users for both chairwomen in a tweet where he also congratulated all female politicians in the country, but İYİ Party spokesperson Yavuz Ağıralioğlu said that the mayor shouldn’t have joined the two messages.

“I don’t find it right to utter the names of Meral Akşener, who stands up for the mothers of our martyrs, with the names of HDP politicians, whose proximity to terrorist networks who have left mothers without children for years we consider a treason to the national cause,” Ağıralioğlu said.

The HDP is often accused of having links to the Kurdistan Workers’ Party (PKK). The HDP denies such links.

Akşener said that both İmamoğlu and Ağıralioğlu were right to say what they did within the freedom of expression, both of which should be taken into account.

“Most of our colleagues didn’t like the tweet by Mr. İmamoğlu. They put their opinions out there, and I have respect for that,” Akşener said.

The chairwoman said that she believes “we will all come together to build a Turkey where no woman is threatened, raped, beaten or harassed.” 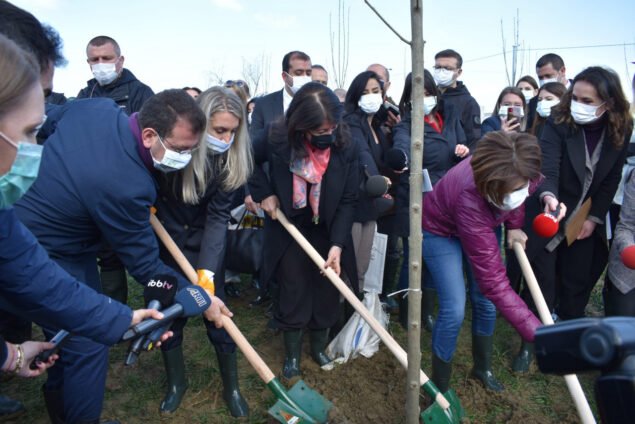 Meanwhile, Buldan seemed to welcome the greeting from the Istanbul mayor, as she released a message saying “Thank you chairman” and attended an opening for the March 8 Memorial Forest he invited her to on March 8.