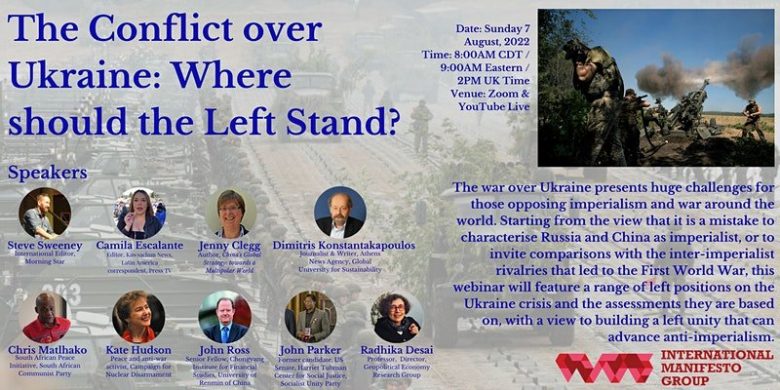 The war over Ukraine presents huge challenges for those opposing imperialism and war around the world. Anti-imperialist mass movements, long opposed to NATO in the US, UK and Europe, have sought to raise awareness among a wider public of its role in the Ukraine conflict, and to counter the warmongering of their governments, their media, and their parliamentary parties. Yet many in these movements remain uneasy about, if not opposed to, Russia’s actions. They are divided both over the character and legality of Russian aims in the conflict, and over whether, how and when to build political awareness of the links of the Ukraine crisis to the New Cold War on China.
_________________________

Starting from the view that it is a mistake to characterize Russia and China as imperialist, or to invite comparisons with the inter-imperialist rivalries that led to the First World War, this webinar features a range of left positions on the Ukraine crisis and the assessments they are based on, with a view to building a left unity that can advance anti-imperialism.

Steve Sweeney is the International Editor of Britain’s Morning Star newspaper. He visited Ukraine in April to report from the ground, however was forced to flee the country after being threatened and labeled a spy.

Camila Escalante is the woman behind Kawsachun News, a media outlet based in Bolivia, and also known for her correspondent work reporting around Latin America. She is the editor of Kawsachun News and a Latin American Correspondent for Press TV. Camila’s family are FMLN revolutionary former combatants. She has previously been based in Quito, Havana and Caracas. She is currently based in Trópico of Cochabamba and reporting on campesino movements across the continent. She will be on the ground covering the upcoming elections in Nicaragua and Venezuela.

Jenny Clegg is an independent writer and researcher; former Senior Lecturer in International Studies and long-time China specialist; author of China’s Global Strategy: towards a Multipolar World (2009); activist in peace and anti-war movement in Britain.

Dimitris Konstantakapoulos is a journalist and writer specialized in international policy, author of several books on Eastern Mediterranean geopolitics and Cyprus. He has worked at the Office of the Greek PM Andreas Papandreou on East-West Relations and Arms Control (1985-88) and as the chief correspondent of the Greek News Agency ANA in Moscow (1989-99). He has been a member of the Secretariat of the CC of Syriza (which he quited in 2015). He is the coordinator of the Delphi Initiative (www.defenddemocracy.press).

John Ross is Senior Fellow at Chongyang Institute for Financial Studies, Renmin University of China. Since 1992, and the publication in Russia of his ‘Why the Economic Reform Succeeded in China and Will Fail in Russia and Eastern Europe, ’he is the author of over 500 published articles on China’s economy and geopolitical relations. He has more than one million followers on Weibo, the Chinese equivalent of Twitter. His articles on China’s economy have won several prizes in China. He is author of two best-selling books published in Chinese ‘ –The Great Chess Game ’and ‘Don’t Misunderstand China’s Economy’. His new book in English is China’s Great Road: Lessons for Marxist Theory and Socialist Practices.

John Parker was a candidate for U.S. Senate in the June 7th election. He recently returned from Russia and the Donbas region on a fact-finding mission and to expose U.S.-NATO war aims and alliances in the region. He received an award for solidarity at Lugansk Regional Administration building from the Chairman of the Government of the LPR Sergey Kozlov. He is the Coordinator of the Harriet Tubman Center for Social Justice and on the Organizing Committee of the Socialist Unity Party.

Radhika Desai is a Professor at the Department of Political Studies, and Director, Geopolitical Economy Research Group, University of Manitoba, Winnipeg, Canada. She is the author of Geopolitical Economy: After US Hegemony, Globalization and Empire (2013), Slouching Towards Ayodhya: From Congress to Hindutva in Indian Politics (2nd rev ed, 2004) and Intellectuals and Socialism: ‘Social Democrats’ and the Labour Party (1994). 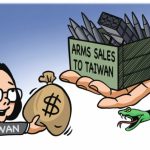 Taiwan is part of ChinaChina, Taiwan 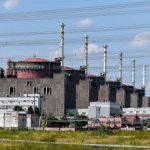 Who wants a nuclear disaster in Ukraine? The role of the Black InternationalDimitris Konstantakopoulos, Russia, Ukraine