The last three days have seen some of the worst shelling of the city of Donetsk by Ukraine armed forces and militias since a ceasefire was agreed to between the Kyiv government and pro-autonomy rebel forces of southeast Ukraine. The ceasefire was signed on Sept. 5 in Minsk, Belarus.

The ceasefire was already very unfavorable to the pro-autonomy forces because it left Ukraine government forces in control of about half the territories of Donetsk and Luhansk oblasts (provinces, or regions). Now Kyiv is routinely violating the ceasefire terms.

One partiularly horrific violation was the shelling of a school on November 5 that killed two teenage students and wounded four others.

Some mainstream media in Canada got around to reporting the school shelling in their print or website editions of November 7 and 8. But they used wire service news reports which typically obfuscate what, exactly, is taking place. An example is the Associated Press report that appeared in the Toronto Star and in the Postmedia chain. The article is an example of the power and reach of the propaganda services of the Ukrainian government and its international allies. Here is how Associated Press describes events:

Authorities in the Ukrainian capital, Kyiv said the security services will investigate the shelling of a school, but officials already appear to have made their minds up. Security spokesman Andriy Lysenko said preliminary information indicated the shells flew into the school from a location controlled by separatist forces.

All that is certain so far is that the school where the shells landed is at least 2 kilometres from the nearest government position but close to rebel posts. That would appear to lend weight to claims of Ukrainian culpability — government troops shelling the rebels — but Lysenko said the shelling was planned in advance by the rebels to discredit government forces.

All but a few mainstream media outlets in Canada declined to report or investigate the findings by the New York Times and Human Rights Watch published on October 20 that Ukraine armed forces have used cluster weapons against the civilian population of eastern Ukraine during the past months of civil war.

Other ceasefire violations by Kyiv include its decision to move more military forces into Donetsk and Luhansk and the announcement by Petro Poroshenko that he will recommend to Ukraine’s Rada (Parliament) that autonomy provisions he had announced in September for Donetsk and Luhansk will be cancelled.

All these moves have come in response to the holding of elections by the rebel political leadership in Donetsk and Luhansk on November 2. These were denounced as illegitimate by Kyiv and its international backers.

Poroshenko’s autonomy promise was vacuous to begin with. The fact it would be so easily cancelled only proves that point.

Kyiv has also announced, on Nov 5, that it will cease payments of social services such as pensions to those living in the autonomous regions of Donetsk and Luhansk.

Officials of the Donetsk Peoples Republic have suspended talks over the sale of coal to Ukraine as a result of the shelling of the schoolyard. The DPR’s Minister of Energy Alexey Granovsky announced, “They kill our brothers and sisters, our children. While this is going on, there is no way we will sell them coal.”Thre is some 2.1 million tons of coal stored in the Donbas region and Ukraine needs it to operate power stations.

Amidst all this rise in shelling and forward movement of military force by Kyiv is the staging by nine NATO-member countries of  a two-week military exercise in Lithuania. Among the countries involved are the U.S, Britain and Canada. Lithuania borders Ukraine. This NATO exercise, called  ‘Iron Sword 2014’, is only the latest in a series of naval, air and ground military exercises by NATO intended to intimidate and threaten rebel forces in Ukraine and their supporters in Russia and other neighbouring countries. 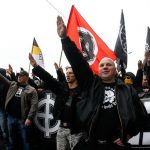 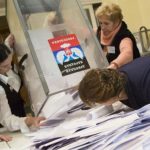 Is Eastern Ukraine becoming a people’s republic or a puppet state?Background, Ukraine