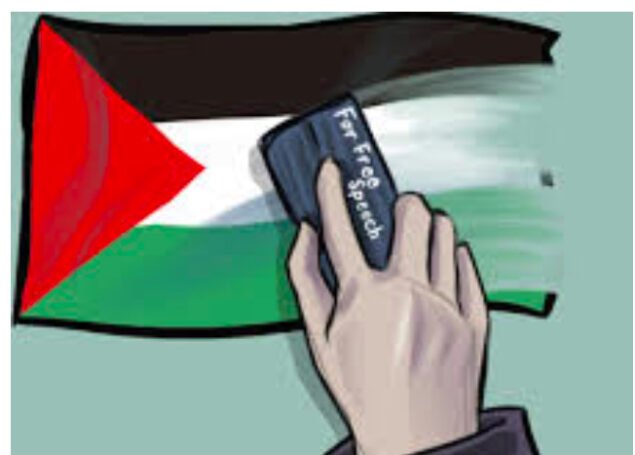 Cancel culture and the Israel lobby in Canada

The Israel lobby regularly torments people and seeks to undermine their ability to make a living. While increasing numbers of Canadians are wise to their slander campaigns, some progressives still end up aligning with the bullies who have misused the term anti-Semitism to intimidate and silence.

The Israel lobby regularly torments people and seeks to undermine their ability to make a living. While increasing numbers of Canadians are wise to their slander campaigns, some progressives still end up aligning with the bullies who have misused the term anti-Semitism to intimidate and silence.

The list of good people who have been put through the “cancel culture” wringer by the Israel lobby is long. Hundreds, probably thousands, of Canadians have lost jobs and contracts or simply been tormented by the Israel lobby for supporting Palestinians.

Last month prominent author and activist Desmond Cole was attacked by Canadian Friends of Simon Wiesenthal Center (FSWC) and others because he said “free Palestine” during an antiracism talk for Toronto District School Board (TDSB) educators. FSWC said Cole was supporting a movement with a “long history of antisemitism, violence against Jews and promoting the elimination of Israel.”

Another high-profile example of the Israel lobby tormenting someone recently is Valentina Azarova who had a position at the University of Toronto law department rescinded under pressure from the Israel lobby. A large campaign forced the University of Toronto to re-offer the job to Azarova but she rejected the position because she didn’t want to continue being harassed by B’nai B’rith and others.

During the dispute over academic freedom, University of Toronto Faculty Association President Terezia Zoric was maligned for saying an “entitled powerful Zionist minority” engaged in “psychological warfare” against those campaigning for Azarova. B’nai Brith claimed Zoric “invoked centuries-old anti-Jewish conspiracy myths” and a petition was launched to remove her.

Elsewhere in Toronto, the Israel lobby has been seeking to destroy the livelihood of an eight-time winner of the Canadian Association of Journalists Award. On September 8, Al Jazeera English columnist Andrew Mitrovica likened the Israeli military to the mafia after an IDF sniper shot and killed a 12-year-old Palestinian boy. Hassan Abu al-Neil was the 73rd Palestinian child killed by the Israeli military this year.

A week later Honest Reporting Canada accused Mitrovica of “hate” in a statement sent to the president of Sheridan College where he is a journalism instructor. When Sheridan College President Janet Morrison defended Mitrovica’s right to “free expression”, the Israel lobby ramped up the rhetoric against him. Canadian Friends of Simon Wiesenthal Center claimed in a statement the professor used “antisemitic tropes to demonize Israel” while Barbara Kay published a column headlined “Journalism professor violates hate speech rules in comparing Israeli Defense Force to the Mafia”. On October 6, Honest Reporting Canada published a follow-up statement claiming “Sheridan has a fiduciary obligation to safeguard Jewish and pro-Israel students from hate. An investigation and disciplinary measures are called for.”

These campaigns target individuals but they are designed to create a sense of fear regarding Israel. At a recent Palestiniens et Juifs Unis (PAJU) leafletting session I met a 20-year-old who had a part time job overseeing a class of seven and eight-year-olds during lunchtime at an English Montréal school. When Israeli violence and ethnic cleansing ramped up in the spring, the young man talked to some of the kids about it and wrote on the chalkboard that Israel waged war with Canadian weapons. He made the mistake of failing to erase the message before finishing his shift, sparking a panic at the school and the police being sent to the community centre where he also worked to investigate a potential hate crime. He was let go from both the school and community centre (once a lawyer got involved, they paid his contract out).

While there are geopolitical, colonial, racial and other dynamics shaping the climate of fear, the most immediate source are the scores of Canadians employed full-time to lobby for Israel. (My guess is about 200 paid lobbyists.) This is no “conspiracy” theory or “anti-Jewish trope” but rather information easily gathered from pro-Israel organizations’ websites.

In “Welcome to the world of paid Israeli slanderers” I detailed the organizational and financial ecosystem of these groups. The late Republican mega donor Sheldon Adelson’s wealth funds groups that operate in Canada, while Canadian billionaires such as Larry Tanenbaum, Gerald Schwartz/Heather Reisman, Sylvan Adams as well as the Azrieli, Bronfman, Sherman and other ultra-wealthy families, also fund lobby groups.

Together, United Jewish Appeal/Combined Jewish Appeal of Toronto, Montréal, Winnipeg, Windsor, Calgary, Edmonton, Hamilton, London, Ottawa, Vancouver and Atlantic Canada raise over $300 million annually and have over $1 billion in assets. The lobbying arm of UJA/CJA, the Centre for Israel and Jewish Affairs (CIJA) has over 40 staff and a $10 million budget. In addition, B’nai B’rith has a handful of offices across the country. For its part, FSWC’s budget is $8-13 million annually. These groups work closely with StandWithUs Canada, CAMERA, Israel on Campus, Honest Reporting Canada and other (often extreme right wing) Israeli nationalist political organizations. More than a dozen campus based Hillels, as well as Israel and Jewish studies departments usually established by well-to-do Israel supporters, often participate in the anti-Palestinian slander campaigns. Dozens of registered Canadian charities, ranging from the Jewish National Fund to Christians United for Israel also engage in at least some pro-Israel campaigning.

The Israel lobby has far more resources than the pro-Palestinian movement. But they are also more determined. While the Israel lobby is focused and often ruthless, the Palestinian side is easily scared and sidetracked.

Recently an editor at the new left-wing media outlet The Breach demonstrated how progressives often let the Israel lobby shape the discussion. He complained that when I defended Foodbenders restaurant and activist Dimitri Lascaris from attacks I didn’t display sufficient concern for discriminatory tropes that may have been employed.

After posting an “I love Gaza” sign in her window at the end of 2019 the Israel lobby started targeting Foodbenders, a small left-wing sandwich shop owned by a single mom. When Kimberly Hawkins posted to Instagram six months later: “Open Now – 8 PM for non-racist shoppers #Bloordale #Bloorstreet, #Toronto, #Open, #ftp [fuck the police] #FreePalestine and #ZionistsNotWelcome”, the anti-Palestinian lobby pounced on the #ZionistsNotWelcome hashtag as discriminatory. They also claimed that a series of other statements she made fed anti-Jewish tropes. For my part, what I saw was someone making progressive, if crude, political statements on a range of issues such as KKK Canada, fuck the police, etc. But, even if I accepted the worst interpretation of Hawkins’ statements, I don’t see how it was “progressive” to feed the campaign to bankrupt a small left-wing restaurant, which included targeting her payment providers, delivery services, website host, city license, etc.

The complaint regarding Lascaris offers a stark contrast between the Israel lobby’s forcefulness and progressives’quibbling. After organizing a 2018 rally opposed to B’nai B’rith’s smears against the Canadian Union of Postal Workers, Lascaris called on Liberal MPs Anthony Housefather and Michael Levitt, CIJA, and others who had publicly defended B’nai B’rith in the lead-up to the protest, to repudiate two of that group’s supporters who called for a number of Muslim and brown politicians to be killed in a video detailing their participation in the counter protest to the rally against B’nai B’rith. Lascaris tweeted about the two B’nai B’rith supporters who “called for the death penalty to be imposed on Justin Trudeau & Liberal MPs Iqra Khalid, Omar Alghabra & Maryam Monsef” and asked Levitt and Housefather to “denounce” the threats “but shamefully, they’ve said nothing.” Then Lascaris tweeted: “Apparently Liberal MPs Anthony Housefather and Michael Levitt are more devoted to apartheid Israel than to their own prime minister and colleagues in the Liberal caucus.”

Instead of distancing themselves from the openly racist Israel activists who uttered death threats, CIJA went on the offensive prompting the prime minister, Conservative leader, NDP leader and many others to condemn Lascaris’ tweets. They claimed that he employed an anti-Jewish trope and three years later some progressives continue to fixate on that rather than the importance of defending a left-wing pro-Palestinian activist from a vicious attack.

When a well-financed and coordinated movement that defends a violent, apartheid state, seeks to destroy progressive peoples’ livelihoods, leftists should tread cautiously when it comes to enabling those attacks.