By Anna King and Courtney Flatt, North West Public Radio/EarthFix, on KCTS 9, May 9, 2017

The U.S. Department of Energy in Richland, Washington activated the Hanford Emergency Operations Center at 8:26 am Pacific Time on Tuesday, May 9. 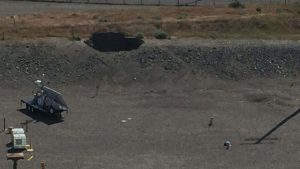 The U.S. Department of Energy issued an emergency alert Tuesday morning at the Hanford Site north of Richland, Washington, after a tunnel containing rail cars full of radioactive material was breached. Some workers at a former chemical processing plant have been evacuated and about 3,000 others near the area at the center of the Hanford Site were directed to take shelter indoors.

State and federal officials said all workers were accounted for, there were no injuries and no indication of “release” of radioactivity into the environment. By early afternoon, the employees taking shelter were released to go home except those needed for emergency response.

In a Facebook Live session, Hanford spokesman Destry Henderson explained that the emergency was triggered Tuesday morning when workers noticed the roof over a tunnel used to store contaminated equipment had sunk. “Crews noticed a portion of that tunnel had fallen, the roof had caved in, about a 20-foot section of that tunnel which is more than 100 feet long,” Henderson explained.

U.S. Sen. Ron Wyden, Democrat of Oregon, said in a statement that the cave-in is a reminder “that the temporary solutions DOE has used for decades to contain radioactive waste at Hanford have limited lifespans, whether they are underground tunnels for storing contaminated equipment or aging steel tanks filled with high-level radioactive waste.”

Washington Gov. Jay Inslee, in Washougal to tour a restoration and flood-control project, said he’s been advised of the emergency and confirmed that there are no reports of injuries at Hanford. “I know there are many questions of how this happened — and we’ll have to get to the bottom of that,” he said Tuesday. “At the moment we’re focusing on the safety of workers and making sure there’s no release beyond (the) immediate site.” 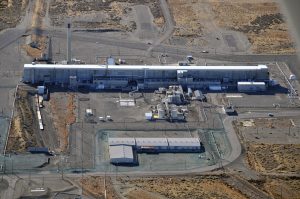 Officials at Hanford were concerned about contamination in soil covering railroad tunnels near the Plutonium Uranium Extraction Plant (PUREX) cleanup site. The tunnels contain contaminated materials. The alert was triggered by the discovery of a small sunken area of soil that covers a tunnel.

According to a press release from the governor’s office, the Department of Energy alerted the state Tuesday morning to inform them that “a tunnel was breached that was used to bury radioactive waste from the production of plutonium at the Hanford Nuclear Reservation.”

The area is not open to the general public.

The plant, also known by its acronym PUREX, was used during the Cold War to chemically extract plutonium from irradiated fuel rods for use in nuclear weapons. In 2015, a preliminary report identified the tunnels and the PUREX facility as a major risk area on the Hanford site. The report concluded if the tunnels collapsed, from an earthquake or another natural cause, it could pose a risk to workers because of the highly contaminated railcars stored inside.

Between 1960 and 1965, eight rail cars were pushed inside one tunnel, full of radioactive waste. Another tunnel was constructed in 1964 to hold 40 additional railcars. Currently it has 28 railcars full of radioactively contaminated equipment. In the early hours of the emergency, it was unclear which tunnel caved in.

“There’s lots of legacy out there, and there are a few places where is substantial ongoing risks, and (the tunnels were) one of them,” Charles Powers, co-author of the risk report, said.

A spokesman for the Washington Emergency Management Division said the state Emergency Operations Center has been activated and is monitoring the situation. The Oregon Department of Energy, which is responsible for radiological safety, activated its emergency operations center as well.

Hanford sits next to the Columbia River. It was one of the original Manhattan Project sites. Its nine nuclear reactors irradiated uranium fuel rods. That created plutonium, which was extracted with chemicals, processed and shipped to weapons factories. Each step produced radioactive waste. Hanford is the nation’s largest nuclear cleanup site, with 56 million gallons of radioactive waste sitting in old, leaky underground tanks 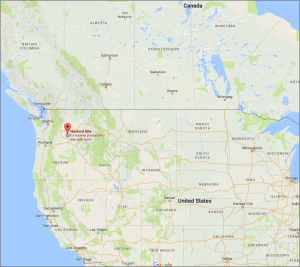 Here’s an explainer on the nuclear waste cleanup at Hanford.

An emergency has been declared at the Hanford Nuclear Reservation in south-central Washington state after the partial collapse of a tunnel containing railcars full of nuclear waste. “Near where two tunnels join together there is a [six-metre by six-metre] cave-in,” said a Hanford joint information centre spokesperson. “There is no detected contamination or [radiation] release at this time.”

Approximately 3,000 workers in the vicinity of the cave-in were told to “take cover” in offices or trailers when it was first detected, but as of 3 pm PT, all non-essential staff were allowed to leave the site. Surrounding residents in Benton and Franklin counties were not affected and updates are being posted on the Hanford Emergency Information website.

The tunnels were built during the Cold War to store contaminated equipment from plutonium production. According to the website, they were made of “wood and concrete with a soil covering approximately 8 feet [2.4 metres] deep.”

Randy Bradbury, a spokesperson for the Washington state Department of Ecology, said no workers were injured or exposed to radiation, and none were inside the tunnel when it collapsed.

The cave-in occurred near the Plutonium Uranium Extraction Facility, also known as PUREX, located in the middle of the sprawling Hanford site, which is 1500 square kilometres.

Hanford is located near Richland, about 300 kilometres southeast of Seattle.

A source said crews doing road work nearby may have created enough vibration to cause the collapse. A message was sent to all personnel telling them to “secure ventilation in your building” and “refrain from eating or drinking,” when the emergency alert first went out.

For decades, Hanford made plutonium for nuclear weapons, including for the bomb dropped on Nagasaki, Japan. It is now the largest repository of radioactive waste in the United States.

Hanford has about 211 million litres of waste stored in underground tanks awaiting permanent disposal. Some tanks date back to the Second World War and are leaking.

The U.S. government has spent more than $19 billion trying to clean up the Hanford site.

The U.S. Department of Energy has declared an emergency at the Hanford, Washington nuclear waste storage site, after a cave-in of a tunnel used to store radioactive materials and equipment. About 3,000 workers have taken cover at the 200 East Area of the sprawling complex, local media reported. By 10:30 am local time, the “take cover” orders have been expanded to the entire site, which is about half the size of Rhode Island.

A portion of a tunnel near the plutonium-uranium extraction plant (PUREX) collapsed early Tuesday morning local time, most likely from vibrations produced by nearby road work, KING-TV reported.

Initial reports spoke of a 4-foot (1.2 meter) hole, which was later expanded to 20 feet (6 meters) across, at the junction of two tunnels used in the 1960s to store highly radioactive materials and equipment, such as trains used to transport nuclear fuel rods.

The PUREX facility was built in the 1950s and used until 1988 to extract plutonium from around 70,000 fuel rods in total. The building has been vacant for nearly twenty years and “remains highly contaminated,”according to the Hanford website. Rail cars used to transport the fuel rods from the nuclear reactors to the processing facility are buried inside the nearby tunnels.

No workers were injured in the collapse, and officials have detected no release of radiation, Washington state Department of Ecology spokesman Randy Bradbury told AP.

“In the ‘60s, spent fuel rods were put in railroad cars and, once filled, the railroad cars were wheeled into a tunnel dug into the side of a hill,” Bradbury said. “Twenty-eight rail cars in all fill this particular tunnel. A worker today noticed a collapse of dirt above the tunnel today, triggering the evacuation.”

Workers at the complex have been ordered to stay indoors and refrain from eating and drinking, according to text alerts seen by local media. Emergency crews are organizing the evacuation. Emergency measures were put in place due to “concerns about subsidence in the soil covering railroad tunnels,” says a statement posted on the Hanford facility website.

Residents of the nearby Benton and Franklin counties do not need to take any action, the facility said.

Hanford is located on the Columbia River in eastern Washington, near the border with Oregon. Built during World War Two as part of the Manhattan Project to develop the nuclear bomb, it still contains roughly 53 million gallons – over 2,600 rail cars – worth of high-level nuclear waste, left from the production of plutonium for the US nuclear weapons program.

A number of current and former Hanford workers suffer from serious medical conditions as a result of exposure to toxic waste leaks and “burps” of radiation at the complex, RT America reported in April 2016.

Staggering sums of money involved in the long-term challenge of solving the world’s nuclear waste problems make it a booming business.

LONDON – There are not many jobs you could take on at the beginning of your working life and know they would still be nowhere near completed by the time you retired. But decommissioning the world’s nuclear power plants is one of them.

The estimates of the amounts of money involved in keeping old nuclear plants safe and dismantling them are so large that they are almost beyond comprehension – and unlikely to be accurate anyway. The fact is that the problems are so difficult and so liable to complications that delays and costs are bound to escalate…